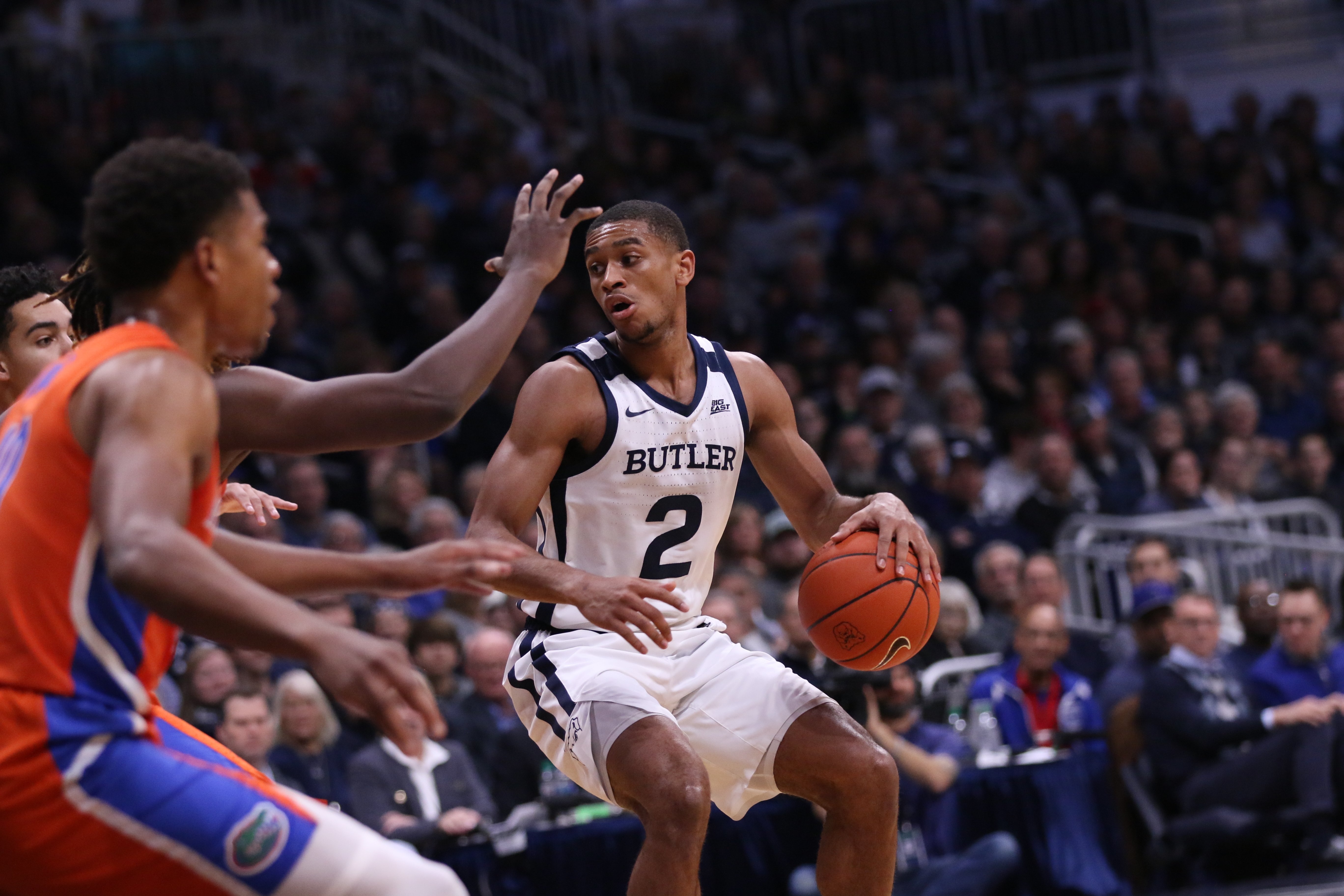 After wins over Florida and Ole Miss last week, the Butler men’s basketball team has moved to No. 18 in the most recent AP poll. The 9-0 Bulldogs travel to Waco, Texas, to take on No. 11 Baylor in the first playing of the Big East/Big 12 Battle. The two teams have a combined six wins against top 75 KenPom teams. Baylor’s wins come against Villanova and Arizona, two top 20 KenPom teams. Here’s what you need to know before Butler heads to Waco.

1. This is easily the best offensive backcourt Butler has played this season.

Butler has seen playmakers like Tyrell Terry and it’s seen talented big men like Kerry Blackshear, but the Bulldogs haven’t seen a backcourt like the one Baylor will put on the floor that is this offensively well-rounded. The Bears’ backcourt is led by MaCio Teague and Jared Butler, who lead Baylor in scoring with 18.6 and 15.4 points per game, respectively. Both guards shoot better than 37.7% from beyond the arc and 87% from the foul line. Davion Mitchell adds another 8.6 points per contest and all three guards dish out about three assists per game.

The Washington Huskies, the only team to beat Baylor this season, saw success by forcing Baylor’s backcourt to make mistakes. Against the Huskies, Teague, Butler and Mitchell combined for 10 of Baylor’s 16 turnovers and also struggled to get into a rhythm offensively. On the other hand, when opponents don’t force these guards into making mistakes, they pick apart defenses. In an 87-78 win over Villanova, Baylor’s backcourt turned the ball over just twice and combined for 53 points on 50% shooting and they knocked down nine threes. The moral of the story is backcourt defense will be crucial for the Bulldogs if they hope to steal one in Waco.

2. Freddie Gillespie is the guy down low for Baylor.

Last year, junior Tristan Clark had his season cut short on Jan. 8 due to a season-ending injury. When he went down, he was averaging 14.6 points per contest and pulling down 6.3 boards. So far, Clark has struggled to get back into the rhythm of college basketball, averaging just five points and 3.5 rebounds on 33.3% shooting this season. In Baylor’s most recent win against Arizona, Clark, a preseason first-team All-Big 12 selection, played just 10 minutes and was 0-for-3 from the field. However, the Bears have found a consistent interior presence in Freddie Gillespie. Arguably the most improved player in the country so far, Gillespie has gone from averaging 5.3 points and 4.4 rebounds last year to averaging nearly a double-double — 9.4 points, 9.1 rebounds — in the young season. The senior has four double-doubles this season including a 17-point, 13-rebound performance against Arizona in Baylor’s most recent win.

3. In general, this is the best team Butler has played this season.

Butler is in a spot than not even the most optimistic Butler fans thought the Bulldogs would be in: four wins against top 75 KenPom teams, one of only eight undefeated teams remaining in college basketball and the highest ranked Big East team — higher than Villanova, Xavier and Seton Hall, who were all preseason top 25 teams. With that being said, Butler hasn’t played a team quite like the Bears. Picked to finish second in the Big 12, the Bears are 11th at KenPom and are 21st in adjusted offensive efficiency and 15th on the defensive side of the ball.

According to KenPom, of the eight remaining undefeated teams, the Bulldogs are least likely to be the last team standing undefeated at 4.1%. A lot of that has to do with this game. The Bulldogs will have their hands full with a really good Baylor team.