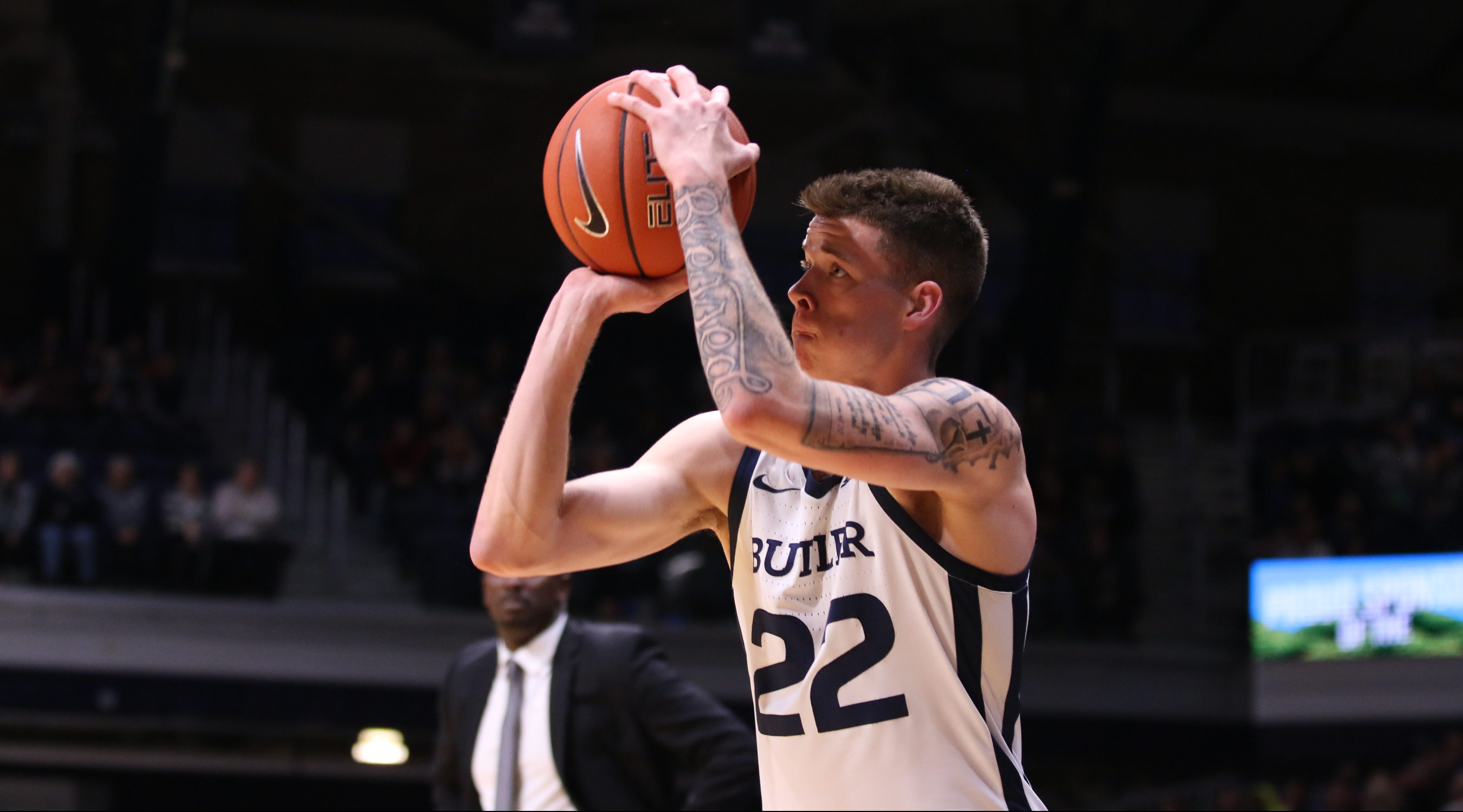 Sean McDermott squares up for a shot against UIndy on Nov. 1. McDermott scored 29 points on 11-of-15 shooting in Butler’s 79-47 victory in their second and final exhibition contest. Photo by Xan Korman.

The Butler men’s basketball team defeated the University of Indianapolis 79-47 in its final exhibition before the regular season begins. Kamar Baldwin and Sean McDermott combined for 46 points and the Bulldogs shot 42 percent as a team from beyond the arc. Here’s what we learned from Butler’s final exhibition game.

1. Sean McDermott looks primed to be Butler’s No. 2 scorer.

Since Kelan Martin left, Kamar Baldwin has been the clear-cut primary option for Butler offensively. At times last year, it was unclear who was Butler’s second option and nobody else was consistent enough to be heavily relied on to put points on the board. Through two exhibition games, Sean McDermott looks like he could be that guy. He backed up an 18-point performance against IU Kokomo with 29 points against the Greyhounds. The redshirt-senior was 11-of-15 from the field and 6-of-10 from beyond the arc.

Not only is McDermott knocking down open three pointers, he is knocking down tough shots and showing more of a willingness to get to the rim. He is also taking shots at a higher volume which is crucial for a second scorer. After taking just 7.27 shots per game last season, McDermott took 15 shots against UIndy and took every one of them without hesitation. Butler desperately needs a go-to second scorer behind Baldwin on the offensive end. Last year, sometimes is was Paul Jorgensen and every once in a while it was Jordan Tucker. In his final season, McDermott is poised to be that guy. If he performs the way he did in the exhibitions, Butler might have another All-Big East caliber player on their roster.

2. Butler turned the ball over too many times, again.

After committing 16 turnovers in their 70-40 win over IU-Kokomo, the Bulldogs turned the ball over 16 times against the Greyhounds. There were certainly positives on the offensive end but ball security was not one of them. Butler committed 11 turnovers in the first 20 minutes before settling down a little bit in the second half, only committing five. There is such a thing as shaking off some of the rust of a new season, and then there is making careless mistakes that you can’t afford to make even against Division II competition. At times, passes were off the mark and the attention to detail wasn’t there on the offensive end.

If there was one thing Butler always did last year, it was not turn the ball over. The Bulldogs ranked 29th in the country last year in taking care of the basketball; they rarely beat themselves with careless mistakes. Early in these exhibitions, that doesn’t seem to be the case. It is still early, but taking care of the basketball should always be a priority. It didn’t come back to bite the Bulldogs against its fellow central Indiana foes, but when Division I competition rolls into town it might be a different story. Hopefully, these two games become outliers and the Bulldogs take care of the ball this season. With that being said, it must improve.

3. Butler dominated the glass, and it was a team effort.

Maybe it was the result of a Division II opponent, but Butler dominated the boards against the Greyhounds. The Bulldogs finished the game with a +16 rebounding margin pulling down 41 boards including 10 offensive rebounds. Last season, Butler was 272nd in the country in rebounding margin and nobody averaged more than 4.9 rebounds per contest. Not only did the Bulldogs dominate the glass, but they did it as a team. Bryce Nze led the way with 11 rebounds — four coming on the offensive boards — and four other Bulldogs had four or more rebounds. Aaron Thompson and Christian David both recorded seven rebounds while Baldwin and Henry Baddley brought down four of their own.

Rebounding allows the Bulldogs to, primarily, end good defensive possessions without allowing extra shots for opponents. In addition, rebounds allow the Bulldogs to get out in transition resulting in easy baskets on the offensive end. Butler struggled mightily on the boards last season, through two exhibition games there are reasons to believe that won’t be the case this season.

Something to keep an eye on, Jordan Tucker played just seven minutes in this one for the Bulldogs. McDermott is already a better defender than Tucker, and when he shoots the ball the way he did tonight, pay attention to how that affects Tucker’s playing time. Of course, Tucker won’t ride the bench this season, but some of Butler’s more successful lineups tonight did not include the Duke transfer. Butler has a lot of bodies this season capable of getting meaningful minutes. As the season begins on Nov. 6 against IUPUI, pay attention to which players get the short end of the playing time stick.