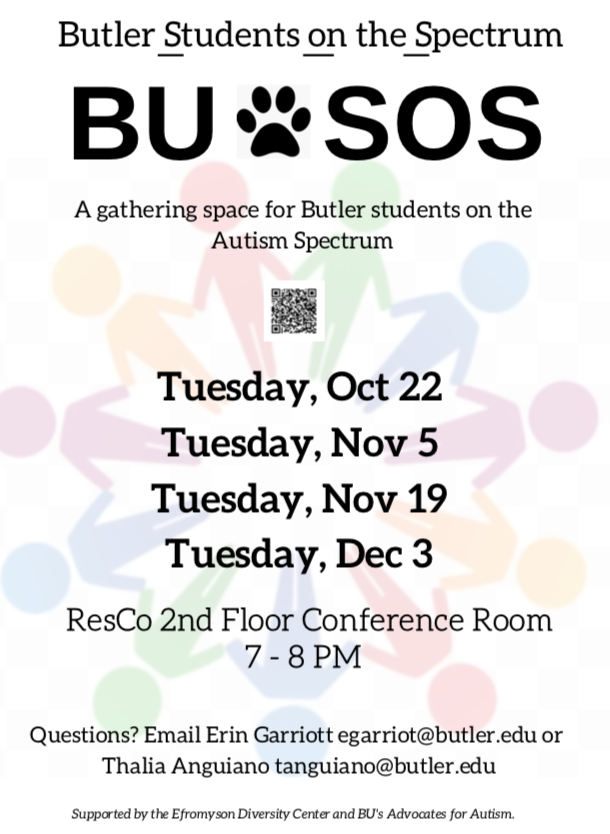 BU Students on the Spectrum, a new group on campus, has begun meeting. Photo courtesy of BUSOS.

Butler University Students on the Spectrum is a new group on campus that provides a gathering space for students on the autism spectrum. The group meets every other Tuesday from 7-8 p.m. in the ResCo second floor conference room. Their next meeting is Nov. 19.

At BU SOS’ first informal gathering on Oct. 22, students got to know each other and focused on which direction to take the group in. Future meetings may hold activities such as game or movie nights.

BU SOS was inspired by Indiana University SOS, but was brought to life by Butler’s Advocacy and Leadership in Special Education class taught by Erin Garriott, a lecturer in the College of Education.

Although Garriott’s class put BU SOS into action, she said she doesn’t want the spotlight to be on them. While their support will always be present, she wants BU SOS “to be about the people who come and need that space.”

“There’s space. There’s time. And it can be used however the people that show up want it to be used,” Garriott said. “We want to make sure that people who identify as being on the spectrum or who wonder if they’re on the spectrum possibly could find other people on the spectrum to talk about their similarities, and there’s some areas of support.”

Both the Efroymson Diversity Center and Student Disability Services provided support for the group and helped BU SOS promote their gatherings.

Alexa Knoderer, a junior secondary special education major, is a student in Garriott’s class and serves as a support figure at the BU SOS’ gatherings. Knoderer is also a member of Advocates for Autism’s executive team and helped to connect the two groups.

“Advocates fully supports it,” Knoderer said. “A few of the [BU SOS] members found out about it through Advocates listserv. It’s really been a great combination between us pushing out information as Advocates for Autism, and us as a class, and the DC and SDS. So many different organizations have come together to support this.”

Questions about BU SOS can be sent to Erin Garriott egarriott@butler.edu or Thalia Anguiano tanguiano@butler.edu.