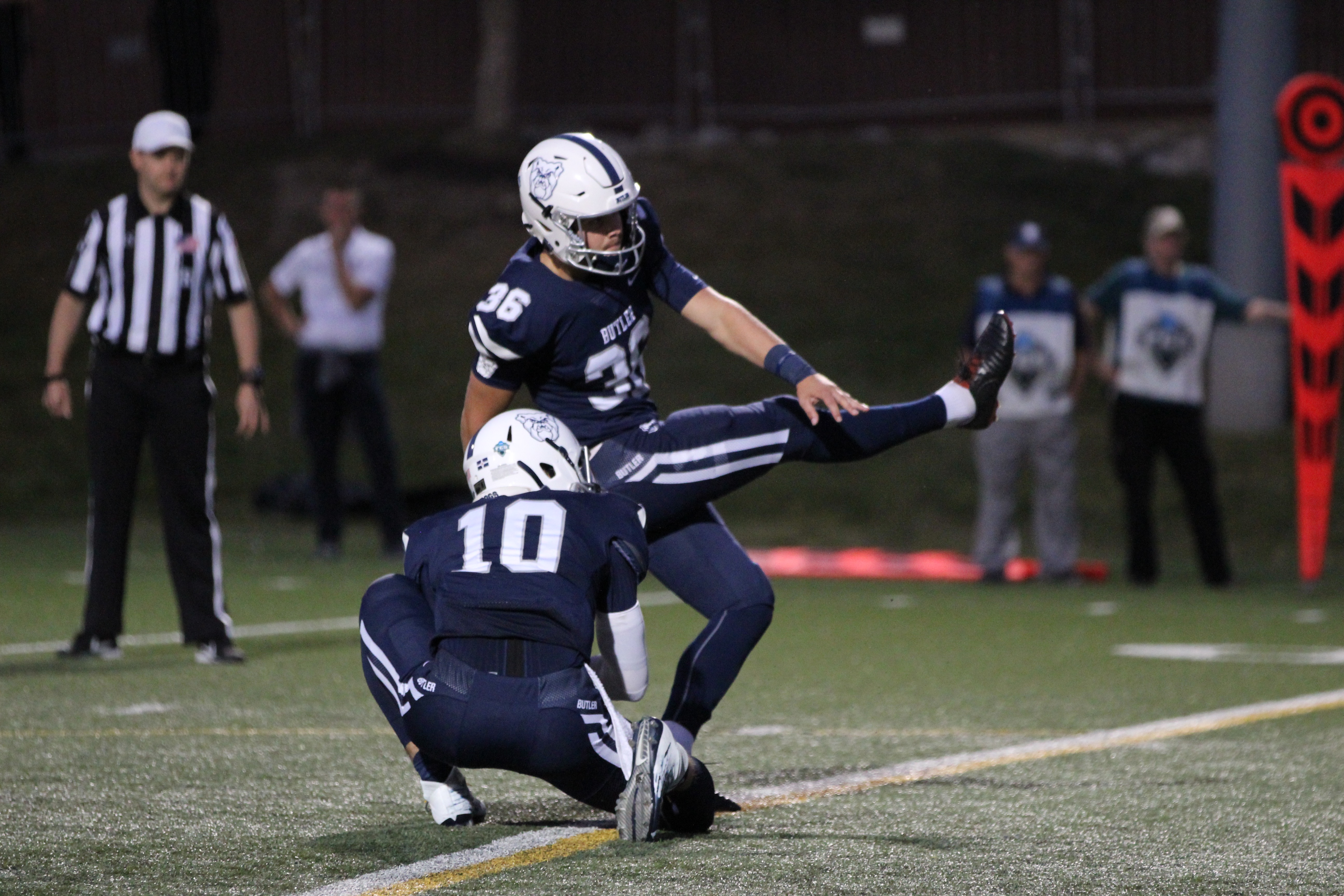 Drew Bevelhimer kicks a field goal against Taylor on Sept. 14. Bevelhimer and the Bulldogs will travel to New Jersey to take on Princeton on Sept. 21. Photo by Chandler Hart.

Butler will open up their season at the Crusader Collegiate, hosted by Valparaiso. The two-day event will take place at the Sand Creek Country Club in Chesterton, Indiana. Butler is among 15 teams taking part in the event. Monday will include 36 holes and start at 9:00 a.m.

Men’s golf will take on day two of the Crusader Collegiate. Day two consists of the final 18 holes. Start times are scheduled between 7:30-9:00 a.m.

Men’s soccer will travel to Edwardsville, Illinois to take on SIUE. The Bulldogs are coming off a 1-0 victory against Wisconsin, boosting their record to 3-1. SIUE is 1-2-1 after a double-overtime loss to Saint Louis. Butler lost to SIUE last season 2-3 at home. Kickoff is at 8:00 p.m.

Women’s soccer is traveling to Salt Lake City, Utah to face Utah in their last non-conference match. The Bulldogs are now 5-3 after a 2-1 victory over Kent State on Sept. 15. Utah is heading into the game on a two-game winning streak and an overall 4-3 record. The Utes are 2-0 at home so far this season. Kickoff is at 7:00 p.m.

Volleyball will finally return home to Hinkle Fieldhouse for the Bulldog Brawl. The Bulldogs will take on Pacific who is coming into the Brawl with a 6-3 record. Butler is now 2-7 after a 1-2 finish at the Panther Invitational. First serve is at 6:00 p.m. The Bulldog Brawl is Butler’s last non-conference matches before Big East play starts.

Men’s soccer will kickoff Big East play at home against Georgetown. Butler lost to Georgetown 0-2 last season. Georgetown is currently 5-0 and the reigning Big East champions. Kickoff is at 7:00 p.m. You can catch the game on BEDN.

Volleyball will face Belmont in their first match of the day. Belmont is entering the Bulldog Brawl 1-10. The match is set for 12:00 p.m.

Football is traveling to Princeton, New Jersey to face the Princeton Tigers. This will be Princeton’s first game of the season. The Bulldogs lost to the Tigers 7-50 last season. Butler is coming off a 14-17 defeat to Taylor as they are now 1-2 on the season. The game will be at Powers Field at Princeton Stadium at 5:00 p.m.