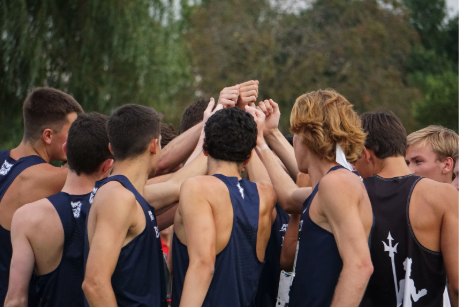 Bulter cross country will continue their season at Pre-Nationals in Terre Haute, Indiana on Oct. 19. Photo by Becca Atchley.

The men’s cross country team traveled to the University of Virginia and finished fourth in the Panorama Farms Invitational on Sept. 27. The Bulldogs competed against a handful of the top ranked teams in the nation, including Michigan State and Virginia. This was the first 8K for the men as their season begins to kick into action with more quality racing to be had.

Euan Makepeace led the team with an 8th place overall finish in 24:18 for 8K.

The scoring five runners all placed within the top 50 out of 161. Simon Bedard, a grad transfer from California Baptist, was the second Bulldog across, placing 27th in 24:50. Following him was Clark Otte, Jackson Martin and Eric Baugh to round out the scorers.

The men placed fourth out of 16 teams with a score of 138 points. Virginia won with 35 points, and the overall individual winner was Morgan Beadlescomb of Michigan State.

In the latest regional rankings, Butler sits in 7th in the Great Lakes Regional, as one of four Big East teams currently ranked in their regions.

Next up for the Bulldogs is the NCAA Pre-Nationals Meet in Terre Haute, Indiana on Oct. 19.