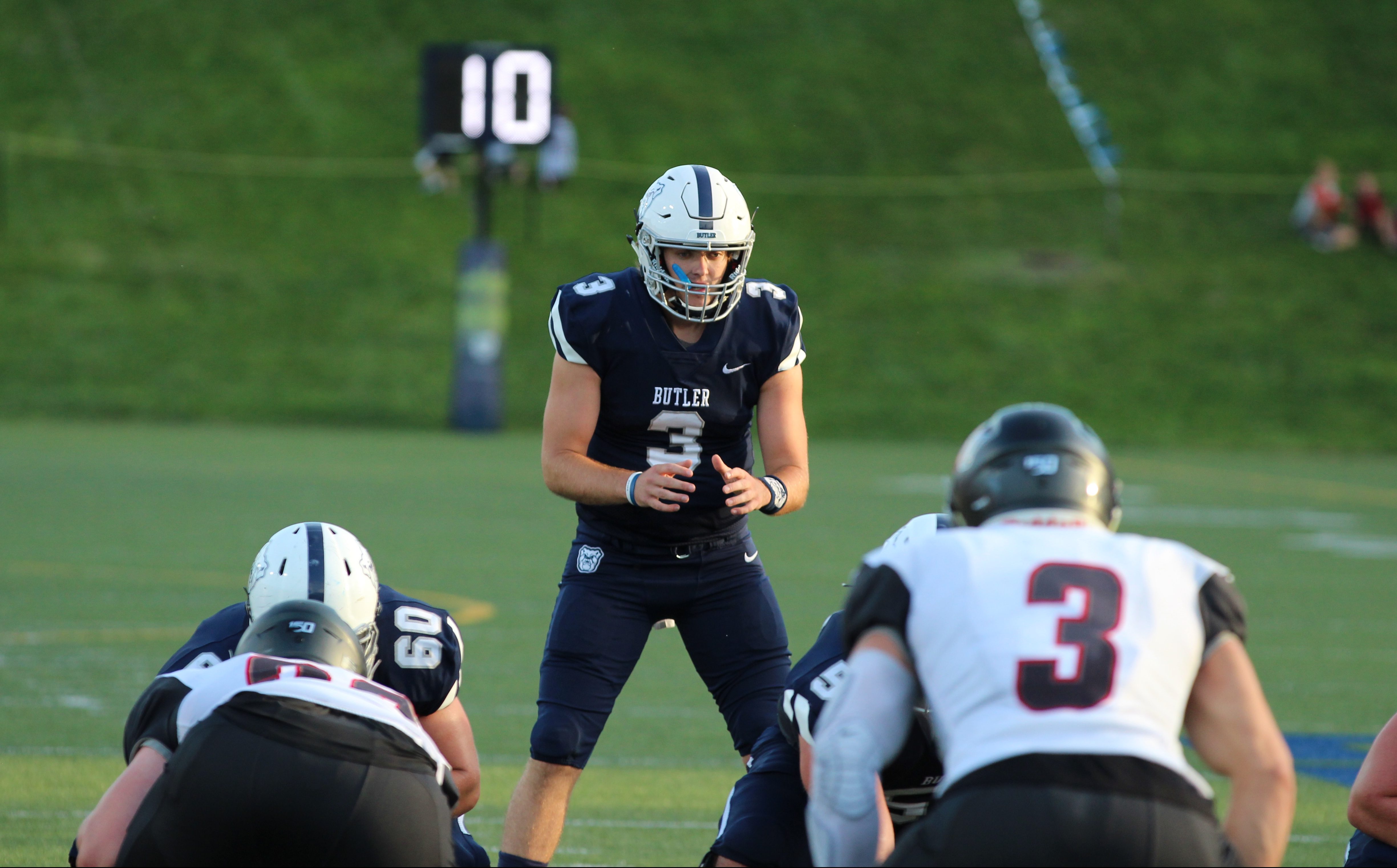 For the first time in three years, the Butler football team can no longer rely on key contributions from quarterback Will Marty and wide receiver Pace Temple. This year, the team is ushering in a new era of core starters and leaders.

Head coach Jeff Voris has confidence in his players and believe they are ready for the field.

“We got really good players that care about the team,” Voris said. “There’s nothing like experience, but we try to coach our players like they’re fifth year guys.”

Voris added that it’s a year-round process for his team.

“We’re committed 12 months a year — in season and out of season,” he said. “We have a dedicated coaching staff that will put the work in to make this team successful.”

However, the Bulldogs weren’t able to show much of their team’s development during their 57-10 blowout loss to defending FCS national champions, the North Dakota State University Bison.

The following game versus Indiana Wesleyan, however, showcased the Bulldogs’ ability as a team in a 30-27 overtime win.

The Bulldogs have a few returning starters on both sides of the ball, leaving much to be seen from this inexperienced bunch.

On offense, the Bulldogs will be led by redshirt sophomore quarterback Sam Brown. Brown takes over for former three-year starter Will Marty, who graduated last year.

Although Brown lacks experience, Marty has helped him continue to develop as a quarterback.

“We still communicate all the time,” Brown said. “He knew the offense so well and it was great learning behind him. He’s been a great mentor to me.”

Butler lost a great weapon on the offensive side of the ball in Pace Temple — Butler’s all time leading receiver. Temple was a staple in Butler’s offense for the past few seasons.

To go along with that, there will only be one returning member from last year’s offensive line: John McArthur, who has made 14 starts at guard over the past two seasons.

Luckily for Brown, he will have returning weapons. The backfield will be headed by Brad Sznjader, who led the team in rushing last season with 972 yards and tallied five rushing touchdowns.

Stephen Dennis, who was second to Temple last season in receptions and yardage, will lead the receiving core this year. Dennis racked up 47 receptions for 586 yards, while adding five scores in 2018.

Although this young group has a lot to prove, Brown said they’ve been preparing all summer.

“Summer was huge for us,” Brown said. “Our team spent the summer here preparing for the season. From team workouts in the morning to working with the receivers in the afternoon, we’ve just been working at it every day.”

The Bulldog defense will welcome back five starters to the lineup, notably Luke Sennett and Mason Brunner, who were both Preseason All-Pioneer Football League selections.

Sennett led the team with 104 tackles, ranking him second in the PFL last season. He will look to continue to provide leadership in the secondary.

Brunner returns as a true veteran of the defense. The three-time team captain recorded 73 tackles, 8.5 tackles for loss and two sacks last season. Brunner will use his past experience to operate this year’s defense.

Drew Bevelhimer, one of the best place kickers in the history of the program, returns on special teams. He set a single-season record by hitting 16 field goals in 2017. Last season, he became Butler’s all-time career leader in made field goals with 36.

Bevelhimer said he owes his success to his teammates.

“I got the best 10 guys on the field with me,” Bevelhimer said. “From the long snapper to the holder to the eight guys blocking up front, they make it all come together. I have an easy job because of them.”

The Bulldogs will face Taylor University and Princeton University to finish our their nonconference schedule before playing their usual suspects from the PFL. They will finish their season on the road against Dayton, who was picked to finish second in the PFL.

Notable conference games for Butler include Jacksonville for the homecoming game on Oct. 26 and Valparaiso University on Nov. 16 for senior day.