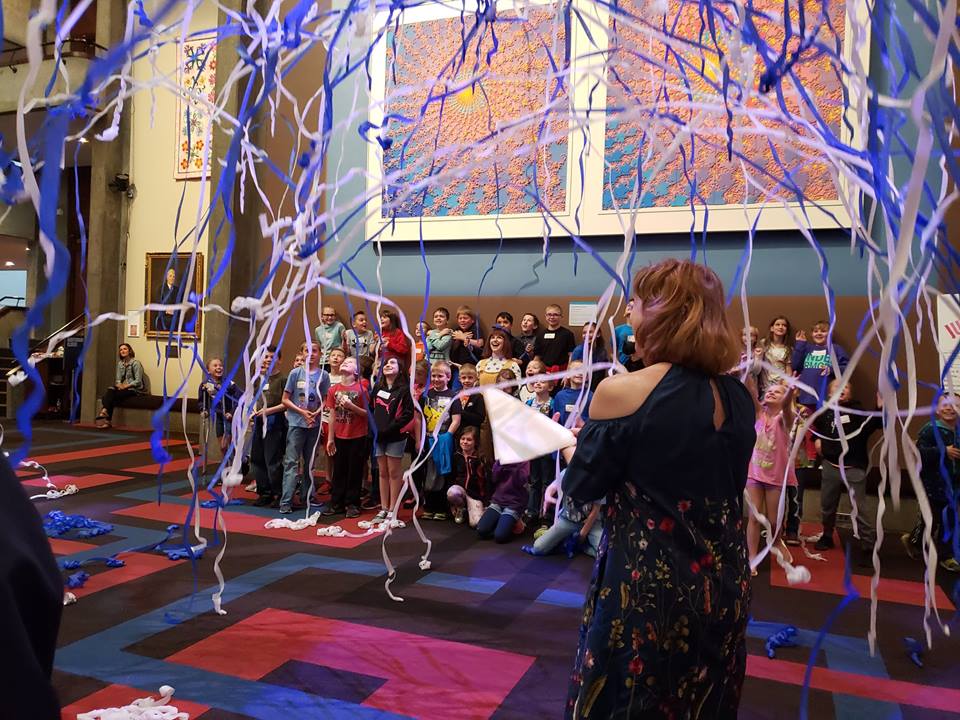 44 second and third graders from Walnut Elementary School were celebrated as the millionth visitors to the Clowes Education Matinee series. Photo from Butler Arts Center.

A milestone 27 years in the making, the Clowes Education Matinee series surpassed its one million visitors mark, with a group of 44 second and third graders from Walnut Elementary School on April 16.

The Clowes Education Matinee series first started under the direction of Tom McTamney in 1991. The educational performance and programming series is aimed at students in the area from kindergarten through high school and accredited by the John F. Kennedy Center for the Performing Arts.

Donna Rund has been the education manager at Clowes for over 20 years. One of her main responsibilities is to book the educational programming at the theater, which usually totals to about 20 different shows every year.

“What we really want to try to do is give them opportunities they wouldn’t normally have either at school or at home,” Rund said. “Live theater is not always something that’s accessible, and we want to make that accessible for young people so that they can enrich maybe the book they’re reading or the time period they’re studying.”

Acts in the Clowes Education Matinee series are sometimes from one of Butler’s own arts programs, but they also include national and international touring shows.

About a year ago, Rund was looking at the final numbers of tickets sold for the prior year and noticed the total number rested at about 977,00 tickets. In an average year, Clowes sells about 30,000 tickets to the shows in their matinee series. Rund predicted the million visitor mark would be reached sometime in the spring of 2019.

This past fall, as the ticket sales total inched closer to one million, Rund started planning the celebration. Instead of picking the exact millionth matinee show attendee to celebrate, Rund and her team at Clowes decided on a certain show and date — to ensure weather troubles would likely not be an issue — around the time period when the milestone was estimated to be surpassed, so the 10 a.m. showing of Junie B. Jones on April 16 it was.

“We honestly just picked a show,” Rund said. “Really, if I looked at the numbers right now, we are probably about 10,000 over at this point, but at the time, we just wanted to pick a day.”

The honored second and third graders from Walnut Elementary School, a public school in New Ross, Indiana just outside of Crawfordsville, travelled about 40 miles to Indianapolis to see the show at Clowes.

Erin Barry, the only second grade teacher at Walnut Elementary School, accompanied her students that day.

“We are such a small, rural school,” Barry said. “Our kids just don’t have the opportunity to go to something like that, so it’s very important and very neat that we as a school can take them and experience that with them because it’s not something they’re going to get to do outside of school.”

“To go to Indianapolis and go to Clowes Hall to see Junie B. Jones and then be the one millionth customer was just the icing on the cake of a great day for them,” Monts said.

Monts said at first the students didn’t quite understand the significance of the one millionth visitors, but they all realized something exciting was happening when the confetti cannons shot off.

“Not only do they put on a great variety of plays and at a good price that schools can afford, but just their enthusiasm and their passion for what they do and providing a service for students is just over the top,” Monts said of Clowes Hall.

The million visitors mark also symbolizes a revival of arts education at Clowes. After the 2008 recession, Rund and the previous education manager at Clowes had to be particular about selecting shows that were more well-known and easier to sell tickets for the Matinee series.

“There is some really wonderful work out there, as you can imagine, but if it doesn’t connect with curriculum, it’s hard,” Rund said. “Now we have opportunities to a try a few new things out there.”

Looking forward, Rund is working to find a corporate sponsor for the Matinee series to reduce the ticket prices so shows are more accessible for all schools. The series runs on Clowes funding currently, but with a company or organization to fund the shows the ticket price could be lowered by half, Rund said.

Student tickets cost between $8 and $11, but schools with 80 percent or more of students on free or reduced lunch plans can apply for half-priced tickets.

“I want to be able to provide a lot more opportunities in so many different areas,” Rund said. “We would be able to do so much more.”

Next season’s Clowes Education Matinee series shows will be announced on May 6.