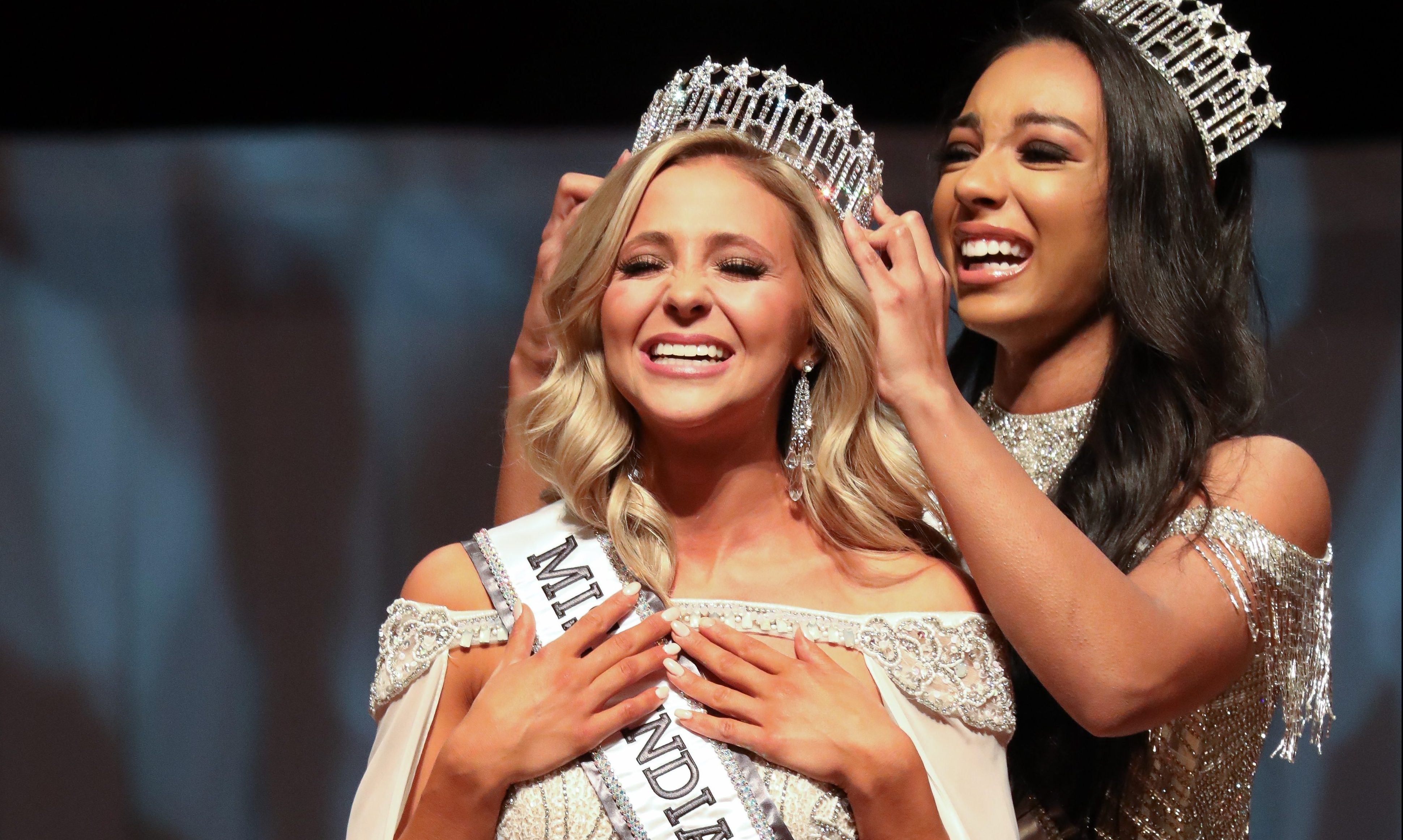 After months of preparation, junior marketing major Tate Fritchley was crowned Miss Indiana USA 2019 on Oct. 21. Last year, Fritchley placed fourth. This year, she came back with new determination, and it paid off.

“I used to get caught up in trying to make everything perfect and I had to learn that not everyone or everything is,” Fritchley said.

The two-day pageant was held at the Palladium’s Center for the Performing Arts. Fritchley and the other 21 contestants competed in three areas: the interview, swimsuit and evening gown.

This year, her on-stage interview question addressed celebrities and their role in politics.

“Taylor Swift recently came under fire for posting on social media about the upcoming midterm election,” the host said. “Do you think celebrities should be vocal about their political beliefs?”

“I think celebrities have all the right to vocalize their beliefs,” Fritchley responded. “Just because one person believes something doesn’t mean someone else has to. I think Taylor Swift has the right to believe what she wants and to vocalize her opinion just as we do ourselves.”

Fritchley overcame her nervousness and, at the end, became the organization’s newest queen and Indiana representative. She will now be moving on to the Miss USA pageant in the spring 2019.

She shared her excitement about winning on social media the day after the pageant ended.

“Absolutely speechless. I am so humbled to represent you Indiana! God’s timing is always perfect and I’m so grateful that he has placed this opportunity in front of me,” Fritchley wrote in an Instagram post. “I have so many thank you’s to give all who have supported me and helped me reach my dreams! But for now, we’re going to Miss USA!”

The road to Miss Indiana USA was not an easy one. Fritchley dedicated hours of practicing, working out, dieting and praying to prepare for the pageant.

“The hardest part for me was just trusting the process,” Fritchley said. “I just wanted to make sure that the efforts I was putting into this would eventually be rewarded, and you just never know what’s going to happen.”

While preparing for the pageant, Fritchley also balanced being a student, a friend and girlfriend.

“If you ask me, I think she’s superhuman, just because I really don’t know how she does it,” Rayder Hobbs said, Fritchley’s boyfriend of two years and a junior at Butler. “With everything she’s got coming up, I really don’t know, but I do know that she does have great time management.”

Meetings, photoshoots and traveling are just a few of the new responsibilities now added to Fritchley’s calendar.

“She keeps everything on point, and she never wastes time,” Hobbs said. “I try to be positive and do anything to just pick her up. Whether it’s texting some Bible verses to her or just some encouragement to get through some weeks.”

This also includes going grocery shopping with Fritchley and participating in her new dietary habits.

“I try to eat well with her sometimes too, just so it was easier for her to go through the process knowing she wasn’t doing it by herself,” Hobbs said.

Wright is a junior human communication and organizational leadership major who has known Fritchley since fourth grade. They are currently rooming together in their sorority house. They’ve been through it all, Fritchley said.

“We have a saying, ‘FTC,’ or ‘for the crown,’ which is kind of funny,” Fritchley said. “So anytime we wanted to go out for ice cream or do something that I would have to stay back to study or stay on track, she would say, ‘FTC!’”

“She worked even harder for this year’s pageant,” Wright said. “I’ve also seen her grow in her confidence in herself and in where she finds her self-worth. I definitely think that her biggest strength as a person is her heart.”

Eaton, a senior marketing and entrepreneurship double major, competed with Fritchley for the first time this year. They met before the summer of their first year at Butler. Fritchley at the time held the Miss Indiana State Fair title while Eaton was Miss LaPorte County.

“In the pageant scene, Tate is so grateful and so humble,” Eaton said. “If you know her, you know she’s accomplished so much at her age. She definitely deserved to win because she just embodies being a genuine girl.”

Some of Fritchley’s most important supporters came from home, as family has always been an important aspect in her life.

“They saw something in me that I didn’t see in myself, and they never stopped believing in me even when I started to doubt myself,” Fritchley said.

Tate’s younger sister Ryan Fritchley, 15, says that she admires her sister’s commitment especially because of how much she said Tate loves food.

“We both have goals and we have the same thought processes so I admire her drive, because anything she committed to she stuck with it,” Ryan said. “We went to a rodeo and she was munching her broccoli and chicken and sticking to her diet. She’s such a foodie that I couldn’t believe it.”

Paul Fritchley is Tate’s father and said he is proudest of the fact that Tate holds on to her core values and “is original anytime or anywhere you meet her.”

“I was worried that style and beauty would become her focus, but God bless her, she’s never changed,” he said. “She continues to put value on what is reality rather than what’s visual like social media and the glam of pageant life.”

Paul talked about how he was far less concerned about the results of this pageant because of the preparations Tate took to achieve her goal became evident in her performance.

“Last year I don’t think Tate was ready to do what she was being called and required to do in this pageant,” Fritchley said. “This year I believe was a lot more ready for what was required of her. She’s grown in the fact of public speaking and making you want to hear what she has to say.”

“Some people just have that ‘it factor,’ and there was something about Tate’s presence that I thought was special,” Abel said. “She’s extremely grounded and just has this sweet demeanor about her. I knew if I could convince her and her dad, Paul, to compete that she would win.”

When they met, Fritchley had just been crowned the Miss Indiana State Fair title holder. Abel told Fritchley and her dad about the 2017 Miss Indiana pageant and her experience as Miss Indiana USA. Once Fritchley committed to compete in last year’s pageant, Abel continued to encourage her and offer advice.

“Of course Tate is beautiful, but her exterior beauty doesn’t begin to compare to the beauty of her soul,” Abel said. “I believe so many contestants get caught up in the idea of what a titleholder should be, instead of staying true to themselves, and they lose their edge. Tate has always stayed true to who she is, and it’s refreshing.”

As a Christian, Fritchley said she has used her faith as a building block to discover her purpose — not just pageantry, but also in life.

“This was a growing experience,” Fritchley said. “At the end of the day, God has a plan no matter what my plan is. So maybe His will isn’t for me to win Miss Indiana USA, and maybe it is.”

Fritchley said the women who participate in pageants are more than just pretty faces. Their role in society impacts the next generation of women.

“I think a lot of people don’t realize how intelligent and how accomplished these young women are,” Fritchley said. “I hope that I make an impact of just being that positive light that people can look to and say, ‘Oh, she’s so full of joy and I can be the same way.’”

Her accomplishments did not begin with winning Miss Indiana USA, but Fritchley said she hopes that they won’t end now that she is a representing the state.

“It’s really humbling to know that I not only represent Butler, and myself, and my family, but Indiana as a whole.” Fritchley said. “It’s going to be really cool to meet different people from across Indiana, and embody what it means to be a Hoosier.”