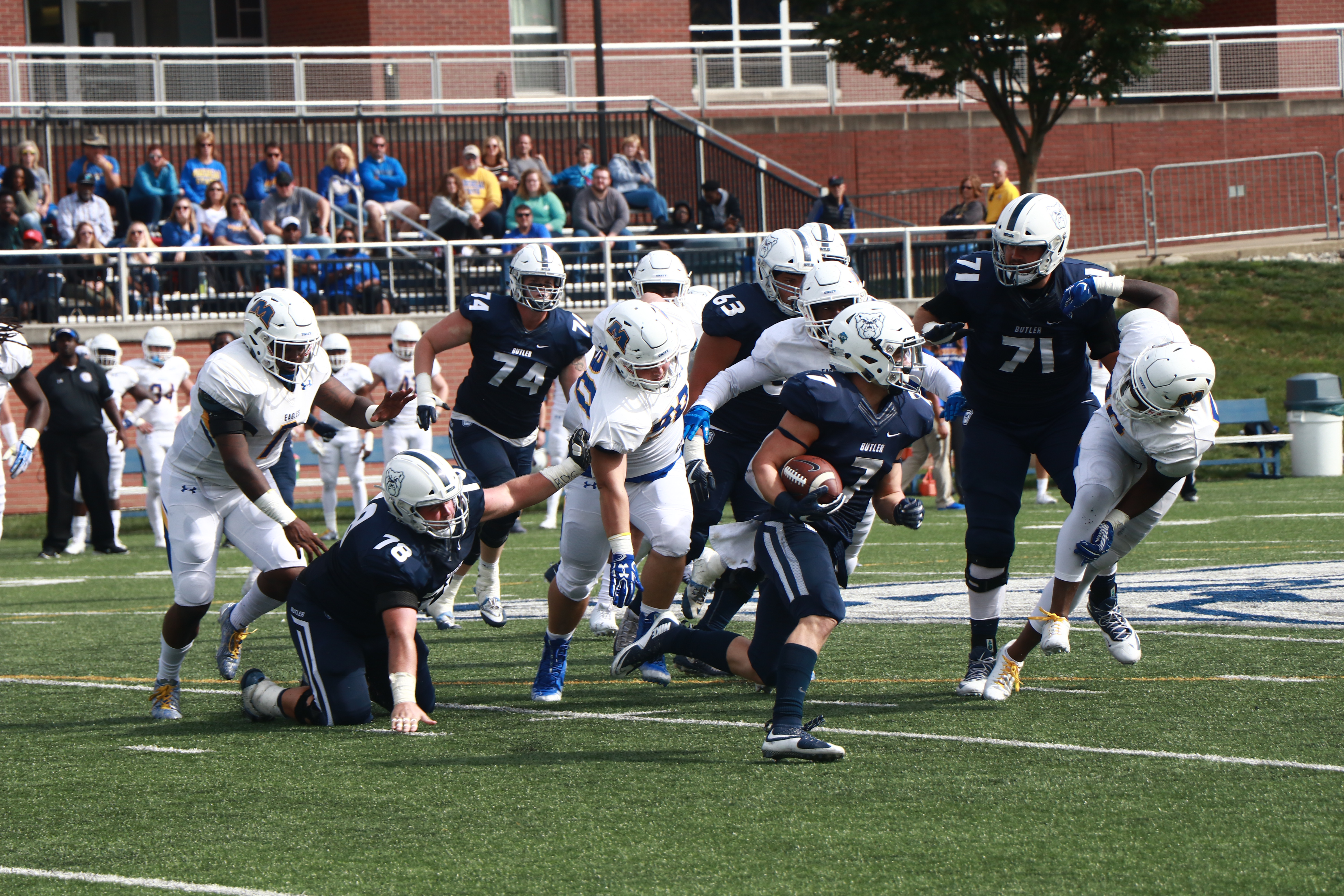 Brad Snzajder looks for a hole to run through. Sznajder had 76 rushing yards on eight carries against San Diego. Jimmy Lafakis/Collegian file photo.

It was all San Diego early and often, and that’s an understatement.

The first three plays of the game were the only ones in which the Bulldogs would not see a deficit, as a 59-yard rushing touchdown put them behind early.

Things didn’t get any better from there.

Butler punted three times in the first half and turned it over on downs once at San Diego’s two-yard line.

San Diego scored touchdowns on every possession except for one, wherein junior defensive back Luke Sennett forced a fumble.

Butler head coach Jeff Voris said San Diego came out fast and it was too much to overcome.

“They’re hard to slow down,” he said. “So, the big thing was we had to create some field goal opportunities for them and we had to score with sixes and we didn’t answer enough, soon enough to stay in it. There’re no 35-point plays in the game. It’s tough.”

Despite being down five scores to a team that hasn’t lost a PFL game since 2015, the Bulldogs came out of the halftime locker room with energy and confidence that wasn’t present in the first half.

On the second play of the half, junior tight end Stephen Dennis took a catch along the sideline back to the middle of the field, outrunning defenders on the way to a 61-yard touchdown.

Butler forced a three and out, making room for a sliver of hope.

Some of that hope was dashed after a Bulldog punt and San Diego making their way into Butler’s red zone.

The Bulldogs took some of it back once more when senior defensive lineman Mark Geers forced and recovered a fumble by simply taking it out of the hands of a San Diego running back.

Butler drove as far as San Diego’s 26-yard line on their ensuing possession, but a sack forced them to punt from the 35.

Still, Voris thinks the energy displayed in the second half says a lot about his team.

“They had a real energy and to me, that shows that there is a play the play mentality and the scoreboard isn’t going to dictate how hard I play or what my focus is going to be or whether I’m still going to play for the guy next to me,” he said.

San Diego scored on their next possession, effectively closing out the game if it wasn’t decided already.

The result was decided, but there were some plays that stood out in the fourth.

Finally, Temple wrestled a pass away from a defender and carried him into the end zone with him for a 26-yard touchdown catch.

The Bulldogs take on the University of Dayton at home next week. Kickoff is at noon.

“You’ve got get half your PFL season left and there’s a lot of football to play,” Voris said. “You’ve got a lot of seniors that have tremendous leadership and a lot of pride in wearing the blue and white and they want to finish strong.”