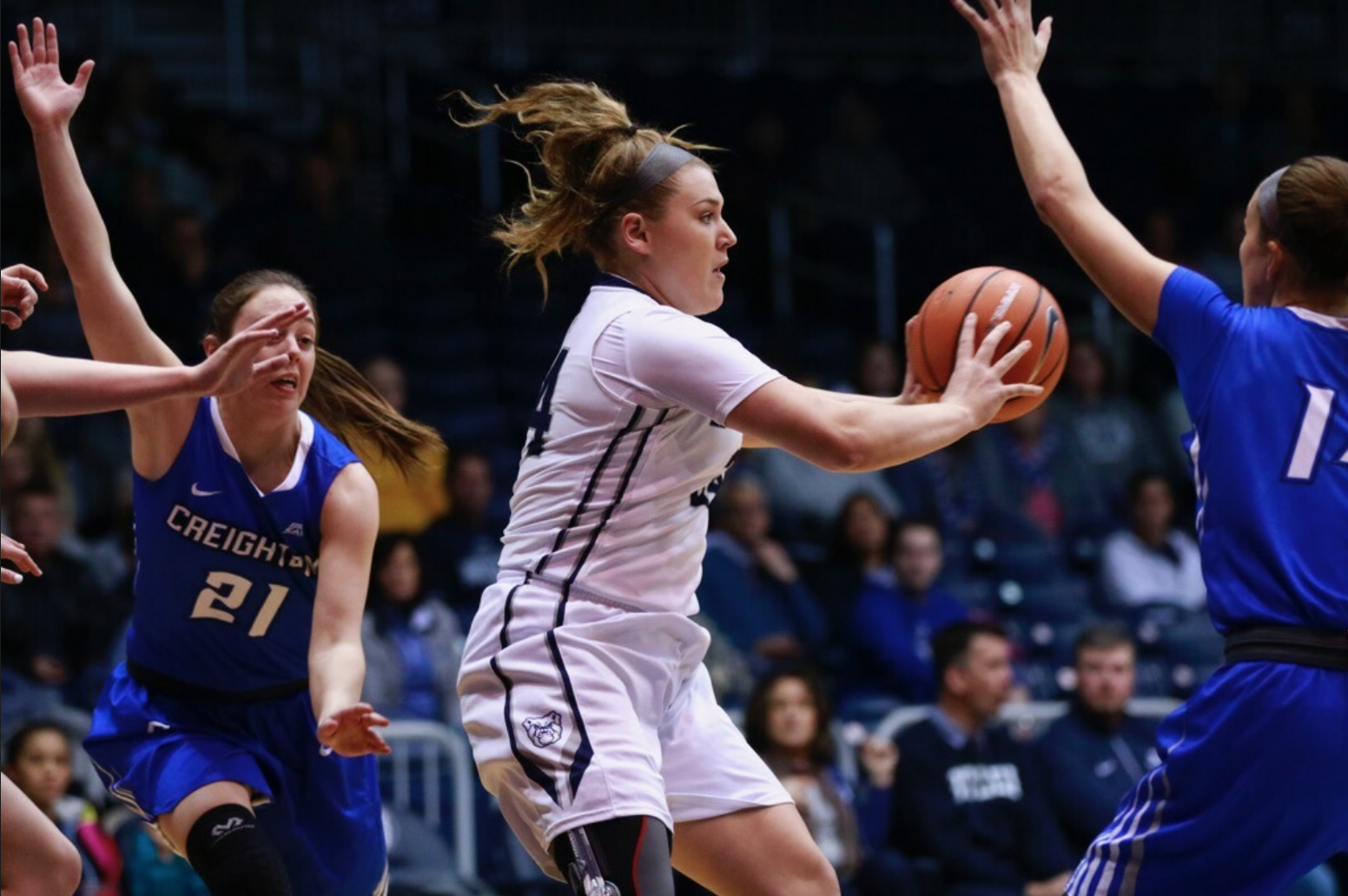 Kristen Spolyar looks for an open pass surrounded by Creighton defenders. With the loss against Villanova on Jan. 28, Butler is 5-6 in Big East play. Collegian file photo.

The Butler University women’s basketball team couldn’t overcome a rough first half, falling to Villanova University 67-69 at Hinkle Fieldhouse on Jan. 28 for their second consecutive home loss. The Bulldogs are now 5-6 in Big East play and 13-10 on the season.

Butler got off to a slow start against the same Villanova team they upset roughly four weeks ago. The Wildcats outscored the Bulldogs 17-9 in the first quarter and made eight 3-pointers in the second quarter to take a 41-31 lead into halftime.

Villanova limited junior center Tori Schickel to just two made baskets in the first half, and the Wildcats scored 33 of their 41 first half points from beyond the arc.

Seven third quarter points from redshirt junior guard Whitney Jennings helped the Bulldogs outscore the Wildcats 14-8 in the frame and bring Butler within four points with 10 minutes to play. The Bulldogs briefly took the lead midway through the fourth quarter, but three key 3-pointers from the Wildcats helped put them over the edge for the victory.

Sophomore guard Kristen Spolyar said the team wasn’t able to effectively shut down Villanova from beyond the arc early on.

“We knew that they were a good 3-point shooting team,” Spolyar said. “In the first half we were just giving them a little too much room.”

Whitney Jennings leads the charge for the Bulldogs who have cut the Wildcats’ lead to 4 with 2:42 to play in the third quarter #GoDawgs pic.twitter.com/eIj6hAsMJO

Schickel, who was limited to just six first half points before adding 13 in the second half, said Butler was able to disrupt the Wildcats coming out of halftime.

“Early in the second half we wanted to get up and just be as aggressive as possible, and it really bothered them,” Schickel said. “That’s something we have to start out with every game.”

For the game, the Bulldogs outshot the Wildcats from the field 44 to 44 percent and from beyond the arc 50 to 39 percent. Villanova out-rebounded Butler 33-26.

After a 2-2 homestand, the Bulldogs will return to action on the road with games against St. John’s University and Seton Hall University on Feb. 2 and Feb. 4, respectively.