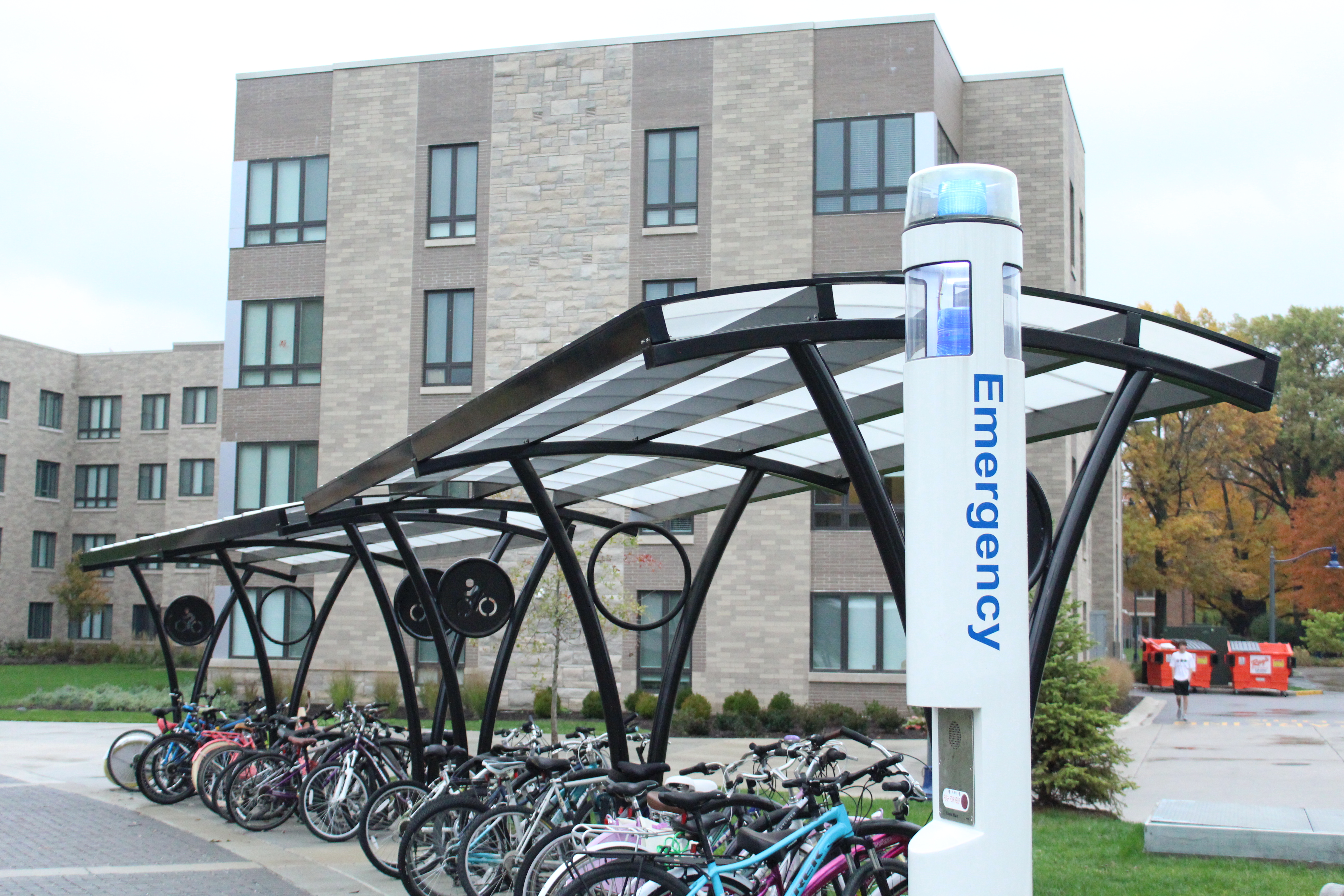 An emergency poll outside of Fairview House. There are 23 different locations on campus with emergency poles. Photo by Emma Hall.

They stand as beacons in the night, silent guardians accessible at 23 different locations on Butler University’s campus. Capable of connecting students in distress to BUPD dispatch through a simple push of a button, the emergency poles are a safety net for students, no matter the situation.

On Oct. 26, a Butler student pressed the button on the emergency pole located by the HRC around 9:30 p.m. However, the call was not answered by a BUPD patrol officer. BUPD Assistant Chief Tony Rivera revealed that the call was not placed to BUPD dispatch due to faulty wiring within the pole.

Rivera said these kind of calls happen quite often. Most of the time, he said people are trying to be funny when they press the button. However, every time the button is pressed, dispatch answers. If the person who pressed the button does not answer dispatch, an officer still checks the area around the pole and nearby walkways.

“This also puts the safety of other students at risk because we are heading to the pole’s site a bit more expeditiously than normal and in doing so, there’s a greater chance for someone to get hit, hurt or anything,” Rivera said. “So, we don’t like these calls very much; we don’t think they’re very funny.”

Rivera said he was unaware of the incident until the Collegian brought it to his attention and provided a date.

Rivera went back and investigated the incident by looking at the surveillance footage on that specific pole on that night at that specific time. After looking at the camera footage, Rivera was able to see that when the button was pushed the pole’s light flashed, but no call was dispatched to BUPD. He was also able to see the student run away after pushing the button.

Junior biology major Sarah McCullough lives in Apartment Village and was alarmed that an emergency pole would be malfunctioning.

“I have always trusted the poles 100 percent, but since it didn’t work during this instance…that makes me a bit uneasy,” McCullough said. “Especially since the walk to AV is usually pretty dark.”

A faulty pole raises the topic of pole maintenance.

“We [BUPD] do not service the poles — that is done through IT and Facilities,” Rivera said. “And if they can’t fix the problem, then it gets outsourced. We just monitor.”

However, Rivera also went on to explain how BUPD does test the poles, alongside Facilities, once a month. During these tests, officers go around to the 113 locations where emergency help buttons are located — such as elevators, the poles and stairwells —and push the buttons to make sure that the calls are getting placed to BUPD dispatch. During each test, an officer has a checklist they have to follow to make sure the call box is working correctly.

“Physically, a person pushes a button,” Rivera said. “Then there’s a sheet we mark on if there’s a pause, if there’s a ring, if we can hear them [dispatch], if they can hear us, if the light flashes and things like that.”

So, why the error in the pole this past week? The firmware within the pole’s box was recently upgraded and, like with any change, glitches can occur. The upgrades are a part of a project to switch all of the poles to a digital technology rather than an analog technology.

While there are no future plans to purchase any more emergency poles, BUPD is hoping that a new campus feature will help ensure student safety.

The new Butler app will have the ability to allow students to issue a CodeBlue from the palm of their hand, whether they are by an emergency pole or not.

“We are hopefully awaiting the new Butler app and the big push out of that,” Rivera said.

Upon hitting the emergency button on the app, a student will be prompted if they are sure they want to call BUPD. In case a scenario presents itself in which a student cannot hit the “Are you sure you want to call the police?” button, there will be a 10 second countdown. If a student does not press either “Yes” or “No” before it reaches zero, the call will be automatically placed to BUPD dispatch.

Colton Junod, senior biology major and vice president of SGA’s Student Initiatives Board, said the new Butler app will be strongly encouraged to be the first choice in terms of contacting BUPD.

“Some of the poles are breaking and aren’t being replaced,” Junod said. “We are hoping that we can move away from relying solely on the poles and focus on the features of the Butler app.”

Another new feature to the app will be the ability to geo-fence. In other words, a “pin” would be dropped to a student’s location and would be sent to BUPD’s dispatch area.

“The geo-fencing ability will strengthen Butler’s campus safety,” Junod said. “There is no current time frame as to when the app upgrades will be finished, but we are hoping to get it done as quickly as possible.”

After hearing about the new features that will debut in the Butler app, McCullough was pleased to learn about ways that campus safety will be further enforced.

“I really like the upcoming upgrades to the app,” McCullough said. “I think it’d definitely

help students a lot. Especially since I think I’m more inclined to use my phone in emergencies rather than the emergency poles.”

While some campuses in the U.S. are moving toward using an app as a replacement to the emergency poles completely, such as the University of Colorado-Boulder and the University of Connecticut, Butler has no current plans of removing the poles. Rather, the campus is looking to combine both the Butler app and emergency poles. This duo of options will ideally provide a greater blanket of security to students and guests.

“We want them for visitors, so if people don’t have the Butler app, we want them to feel as if they have some safety option available to them,” Rivera said.

With the foreseeable future showing the emergency poles as a constant presence on campus, Rivera has additional tips for individual student safety.

First, he said to use Dawg Ride. This service is available from 7:00 p.m. to 3:00 a.m. on Wednesdays through Sundays.

But when Dawg Ride is not available, Rivera said to remember that BUPD offers safety escorts that are available anywhere around campus.

“You can call the police department and an officer will either escort you by foot or in their vehicle to where you need to go,” Rivera said.

The safety escorts are offered seven days a week from dusk until dawn and are available to groups of two or less students. In response to individuals who claim that they do not feel safe at night, Rivera urges people to call BUPD’s non-emergency number. Rivera reminds those who may feel “embarrassed” about riding in a squad car to remember the safety escorts also include having officers perform a “visual escort.”

Rivera said BUPD can park in the street and “simply watch [people] walk across” if they feel nervous or scared.

“In fact, we have several employees who work late at night and need to get to their car,” Rivera said. “So, they’ll say that they don’t need us to walk them but if they see the squad car when they’re walking it helps add further comfort to them.”

Rivera said he is not the biggest fan of students talking on their phones as a way to stay safe.

“If you’re on the phone with a friend and you get disconnected, what are you going to do?” Rivera said. “You’re going to try calling them again until you reach them, right? But you’re wasting minutes and precious time. I know sometimes it can feel comfortable to talk to somebody, but you’re getting distracted and need to be aware of your surroundings. Have your ears open to hear any noises. If you are scared, have 911 on your phone and your thumb by ready if you do need it. To me, that’s the best way to go about night safety.”

If a student has any more questions concerning BUPD’s services, Rivera suggested they visit BUPD’s website.