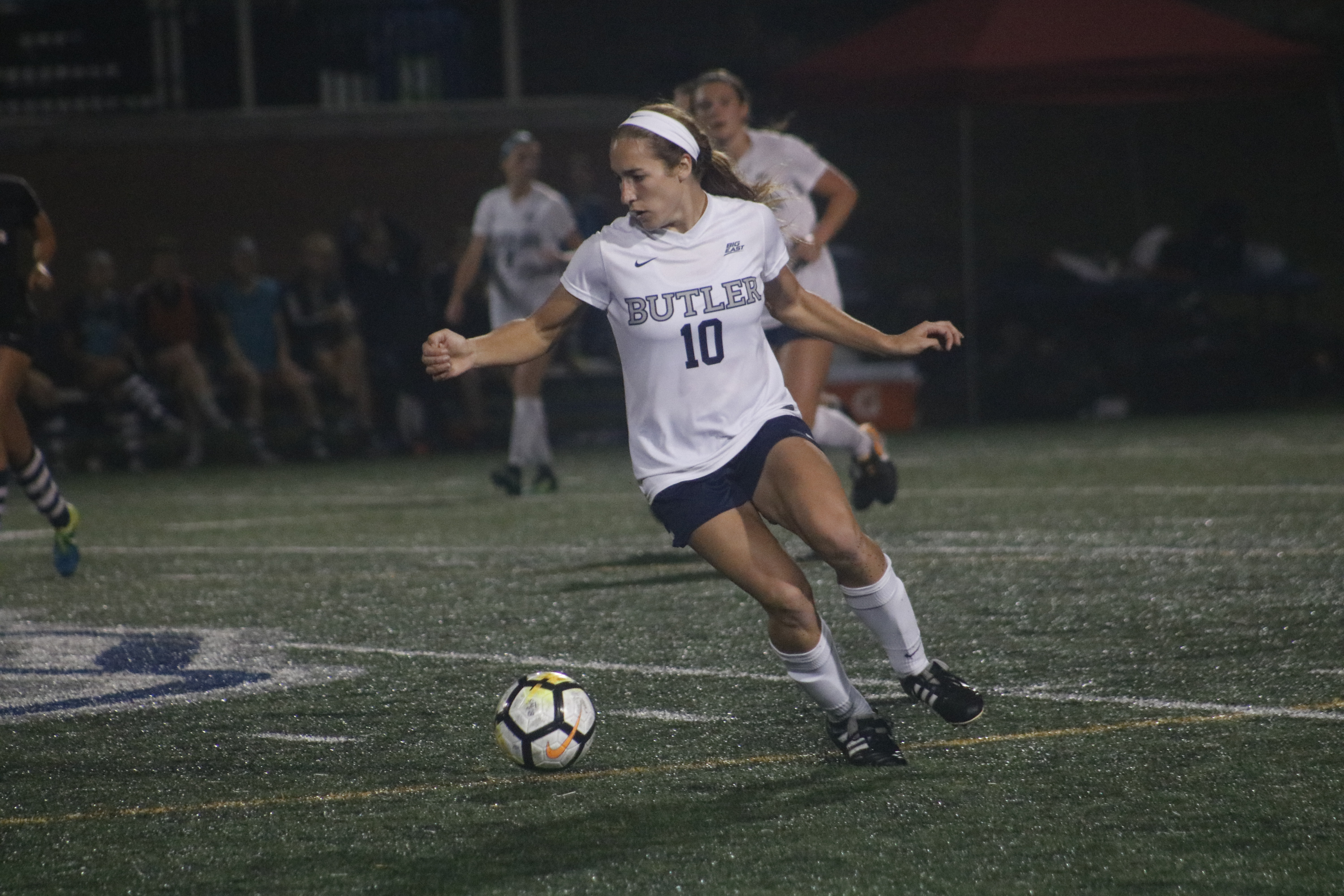 Junior forward Breann Pempek steps in front of a pass against Providence on Nov. 2. Photo by Jimmy Lafakis.

The Butler University women’s soccer team did not have much to celebrate after Nov. 12. The Bulldogs were just eliminated in the first round of the NCAA Tournament by Northwestern University in penalty kicks 3-2 after playing 110 minutes of scoreless soccer.

The loss marked the second time in three years that they lost to a Big Ten school in the first round of the NCAA Tournament.

“It’s unfortunate with the NCAA Tournament,” Paige Monaghan, the junior forward and Big East offensive player of the year said. “It’s kind of hard to look at all this success that we had this past season because we’re kind of focused on what happened Sunday. But, we recognize what we did and what we can do for next season. That way we can grow as a program, which I believe we’re headed in the right direction.”

The Bulldogs’ success story in women’s soccer begins two years ago. They won the 2015 conference title and set a school record with 16 wins. Their first trip to the NCAA Tournament resulted in an overtime loss to Ohio State University.

This year, they set a school record with a 17-match unbeaten streak and went undefeated in Big East play (5-0-4).

The team received their first at-large bid to the NCAA Tournament after losing to Georgetown University in the Big East championship.

“There’s 333 teams and only one team’s happy at the end of the day,” Schmidt said. “It was unfortunate. But [we will go] onto the next year with bigger and better things for the future. I know I’ve grieved the past few days because we have had so much success, and I think we have a really talented team, not just individuals. We’re a really good, collective, humble team.”

The Bulldogs have a number of individuals returning for next year. While they will lose seven seniors to graduation, the Bulldogs’ return eight of their 11 starters. They lose virtually none of their offensive threat, as all but one player with a goal returns for the 2018 season.

The team does have a strong senior leadership core to replace. Shannon McDevitt, senior defender and second team All-Big East member, said communication was one of the keys that the seniors focused on. That communication came to a pinnacle against Providence College in the Big East semifinals, where the Bulldogs won in a 3-0 blowout.

Next year will be Monaghan’s final year as a Bulldog. She said next year, the team will have to grind and expand on the work that this year’s seniors have done.

“The seniors are really a special group,” she said. “That sounds cliche, but they’ve really done so much. Their freshman year, they were really bad. That’s what they joked about, and now they made the NCAA Tournament twice. They’re a huge class that made a major impact here.”

One of the Bulldogs strengths is in their youthful core. Nine freshman will return for 2018, including Big East All-Freshman team members Caitlyn DiSarcina, Leonie Doege and Julia Leonard. DiSarcina finished the year with eight goals, including five game-winners. Doege finished the season first in the nation in save percentage and third in goals-against average.

Though not a freshman, Schmidt was a transfer who played her first season after transferring from the University of Connecticut. She said the team just went out and worked hard every day. She said she looks forward to putting that hard work in next year.

“It’s just honestly a humbling experience to come into such a great team that’s so welcoming,” she said. “And each day was a great day for us because we just wanted to get better collectively. We weren’t ever just looking back at the games. We were looking back from them and we were improving from them. We were always in the present and honestly each day was great.”

While Schmidt has a few year’s left with the team, McDevitt can only reflect on her past four years with the program. McDevitt said she is excited to see what comes next for her former team.

Monaghan said she thinks the team can definitely make a return trip to the NCAA Tournament next year. Unlike their previous two trips though, she wants to host a first round game.

“Getting a higher seed is very beneficial,” Monaghan said. “I think that’s something we learned this year. We have to have that hunger and that strive for that, which I’m excited about.”