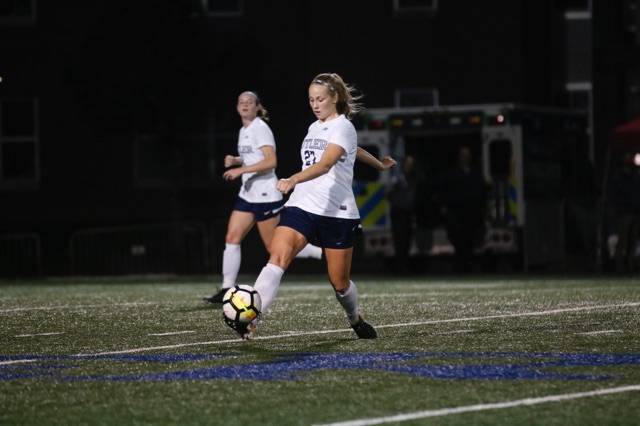 Annika Schmidt knocks down an opponents pass in Butler’s 3-0 win over Providence in the Big East semifinals. The Bulldogs will face Georgetown on Nov. 5 in the Big East championship game.

“We played [Providence] before, so we knew they’d play in a similar way,” freshman forward Caitlyn DiSarcina said. “The mental preparation was a huge part. Also, getting out there yesterday for a good practice was a good part of preparation as well.”

An early goal by DiSarcina gave Butler a lead in the fifth minute. DiSarcina knocked in the goal after a shot by junior forward Paige Monaghan, which was saved but not controlled by the Providence goalkeeper.

Redshirt sophomore goalkeeper Hannah Luedtke made a save in the 38th minute to keep Providence off the board. The shot came from just 10 yards away from the net, where Luedtke made a leaping save to knock the shot wide left. The Bulldogs took a 1-0 halftime lead into the locker room.

“I knew I just had to get something on it because it was on frame,” Luedtke said about her save. “I just reached out and tipped it over the bar.”

While the first goal was the only goal Butler would need, the Bulldogs added two more in the second half. Freshman defender Julia Leonard scored off of a Butler corner kick in the 59th minute for her second goal of the year.

“Annika [Schmidt] just kind of flicked it back into the run of play,” Leonard said. “And I just happened to be in the right place at the right time.”

Monaghan scored Butler’s last insurance goal in the 72nd minute. Her goal came from 20 yards away, when she fired a shot to the right of the goalkeeper for her 10th goal of the season. Monaghan was assisted by freshman midfielder Elena Gutlove.

Monaghan led the Bulldogs with five shots and DiSarcina added four. Five other players combined for the other seven shots in the complete team effort.

Now, the Bulldogs prepare for the trip to Georgetown on Nov. 5. The Hoyas were the regular season Big East champions and won the Big East tournament last season. The Bulldogs are seeking their second Big East title in three years.

“We’re really excited to have this opportunity,” Luedtke said. “We, as juniors and seniors have experience by being there. And that’s something that we’re going to be able to layoff to our underclassmen.”

The championship game will start at 1:30 p.m. in Washington D.C. and will air nationally on Fox Sports 1.