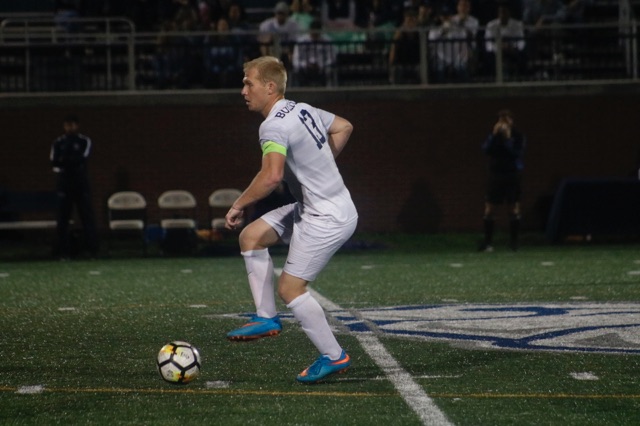 Eric Leonard dribbles the ball down the field. Leonard’s Butler career came to an end with the loss to Wake Forest.

Butler’s men’s soccer team was defeated by No. 1 Wake Forest University, 2-0, in the NCAA tournament round of 16. It was the Bulldogs’ first regulation loss since Oct. 10. The team finishes the season with a record of 14-5-2.

The first half was a scoreless defensive struggle with limited chances for both teams. They combined for only eight shots, one on goal for each side.

Sophomore forward Brandon Guhl had the best look at goal with a header that was saved in the 43rd minute by Wake Forest goalie Andreu Cases Mundet.

The Demon Deacons opened up the second half on the attack. Seven minutes in, Brandon Servania fired a rocket into the top-right corner to put Wake Forest ahead. Ema Twumasi’s shot in the 55th minute hit the crossbar, but the Bulldogs were able to keep the score at 1-0.

Redshirt senior goalie Eric Dick made five saves to help keep Butler within a goal, but the offense couldn’t find the back of the net. Wake Forest outshot the Bulldogs 19-6 in the game and limited Butler to only two shots on goal.

In the 86th minute, Jon Bakero’s shot took a deflection and landed in the net, extending the lead to 2-0 and effectively clinching the victory.

Of the 11 players who started the game for Butler, eight will be eligible to return next season. The other three players, Dick, midfielder Eric Leonard, and midfielder Bennett Kim are seniors with no eligibility remaining.