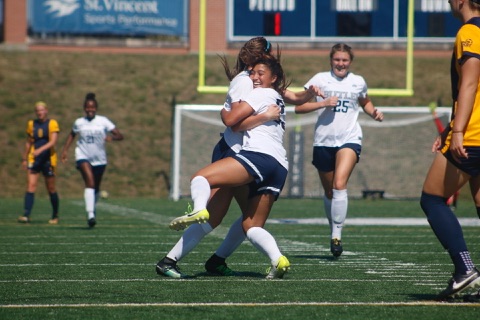 The No. 20 Butler women’s soccer team made history throughout the season. It started with a nine-game shutout streak and finished with an undefeated Big East regular season slate.

Now, their goal is winning the Big East tournament.

The Bulldogs were picked to finish sixth in the Big East preseason coaches poll. Bouncing back after an early loss at Ohio University, the team has not lost their last 16 games. This includes a nonconference road win over then-ranked No. 10 Texas A&M University, and a tie against reigning Big East champion Georgetown University.

Co-head coach Rob Alman, who was named to the Big East Coaching Staff of the Year along with co-head coach Tari St. John and assistant coach Robert Klatte on Oct. 28, said their success comes from the team’s focus and game control.

“A big part of that is defensively, taking away what the ‘plan A’ is from the opposition,” he said. “When you have good defensive stats, those defensive stats are helped a lot if you’re really good offensively. And you can control the ball and control the game the way you want it to be played.”

The Butler defense wreaked havoc across the Big East. The Bulldogs only gave up three goals in conference play and four goals throughout the regular season; both are program records. They lead the NCAA in goals against average and save percentage.

The Bulldogs are led by a pair of goalkeepers in redshirt sophomore Hannah Luedtke and freshman Leonie Doege. Doege was named Big East Freshman of the Year after allowing only one goal in her 883 minutes of game time. After the regular season, she also led the NCAA in save percentage.

On the offensive end, two forwards have stood out; junior forward Paige Monaghan and freshman forward Caitlyn DiSarcina. Monaghan was named Big East Offensive Player of the Year and All-Big East first team after scoring nine goals in the regular season. DiSarcina made second team All-Big East after scoring seven goals on 21 shots, as well as the All-Freshman team.

After knocking off the Wildcats on Oct. 26 to finish the regular season, the Bulldogs earned the No. 2 seed and bye in the Big East Tournament. They will have home field advantage for the semifinal. Butler plays Providence College on Nov. 2 at 7 p.m. at the Sellick Bowl.

“The biggest benefit that we get, to be honest, is just having the bye and not having to play on Sunday,” Alman said. “It just gave us a couple of extra days to get everyone’s bodies back a little bit.”

The Providence-Butler matchup has interesting history. The Bulldogs won their first-ever Big East title over Providence in 2015, knocking off the Friars 1-0. Also, Butler beat Providence in their lone meeting earlier this season in double overtime, thanks to a goal by DiSarcina in the 108th minute.

“We got the overtime win in a very tight game,” Alman said. “We expect them to come here ready. They will be super prepared as always in terms of their game plan. They do a great job in their possession play and they’re very physical.”

While the game holds a potential do-or-die scenario for the team in regards to a Big East championship and a NCAA Tournament berth, Leonard said the game is just another game.

The Friars enter the semifinal matchup with a 10-7-2 overall record. After losing four of their first five games to begin the year, Providence finished third in Big East regular season play with a 5-3-1 conference record.

“I think it was a big battle last time,” Doege said. “That was the only team that scored on me. They’ve got some big, tall girls in the midfield to watch out for.”

Butler will rely on their upperclassmen with Big East tournament experience. Monaghan scored the game-winning goal against St. John’s University in the semifinal game in 2015. Also, McDevitt was named to the Big East All-Tournament team.

Waiting on the other side of the bracket is Georgetown and Marquette University. The winners of both semifinal games will play at the higher seeded team’s site on Nov. 5. The game will air nationally on Fox Sports 1 at 1:30 p.m.