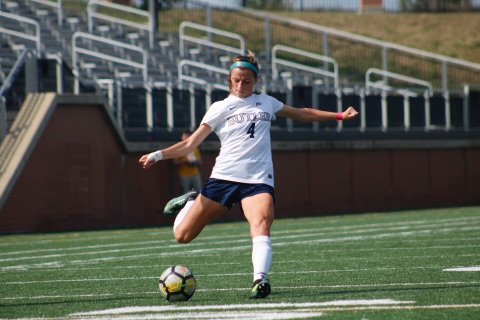 Junior forward Paige Monaghan takes a shot against Cleveland State. Monaghan scored her fifth goal of the season in Butler’s 1-0 win over St. John’s on Oct. 8. Photo by Jimmy Lafakis.

The Butler women’s soccer team took their 10th win of the season in a 1-0 shutout over St. John’s University at the Sellick Bowl on Oct. 8.

The first half was action packed, with both teams getting plenty of scoring opportunities. Junior forward Breann Pempek got a shot off on the mark in the 37th minute that was saved by St. John’s Jordan Kamp. The Red Storm would get two shots off in the next two minutes, one of which hit off the post.

In the final minute before halftime, junior forward Paige Monaghan broke the tie with a long shot from 30 yards out. Her shot sailed over the hands of Kamp and into the back post for the goal.

“We we’re really pressing St. John’s,” Monaghan said. “Elena Gutlove played a perfect ball to me. I was able to get my body around it. I faced up, saw the goal and knew I had to hit it back post…and it ended up going in.

In the second half, the St. John’s offense aggressively tried to score an equalizer goal, but was unable to get a clean shot on net. The Bulldogs kept the Red Storm off of the board for their 12th shutout of the season.

Redshirt sophomore goalkeeper Hannah Luedtke got the win after starting and playing the first half. Though the Butler goalkeepers did not make a save, they were credited with one team save.

Butler won the shooting column, out shooting St. John’s 8-7. Pempek led the team in shots with three, while Monaghan and junior forward Halle Stelbasky finished with two. The Bulldogs tallied five shots on goal, while the Red Storm only mustered one.

Butler freshman goalkeeper Leonie Doege played the second half, not allowing a goal but also not making any saves. Doege said the team still has plenty of work left, with four more Big East games left before the conference tournament.

“We’re still going to keep working, especially during fall break,” Doege said. “We don’t underestimate any teams and we want to keep on working hard. We don’t want to have to win in overtime anymore.”

Butler women’s soccer moved to 3-0-2 in the Big East and 10-1-3 overall with the win. The Bulldogs have a rare Thursday night off in conference play, but the Bulldogs are back in action at DePaul University on Oct. 14 at 2 p.m.