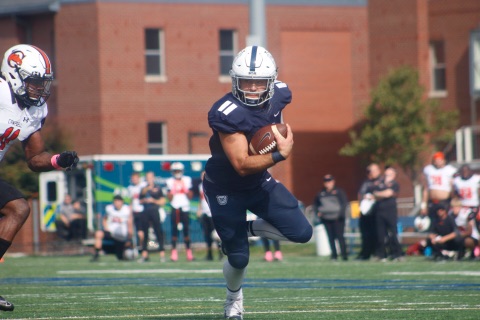 Redshirt senior running back Sam Schrader outruns a defender in Butler’s triumph over Campbell on Oct. 21. Photo by Jimmy Lafakis.

The Butler football team is now 5-3 after handing Campbell their first Pioneer Football League loss of the season. The Bulldogs beat the Camels 37-23 behind another complete offensive performance and a defense clicking on all cylinders.

“The bowl is always fun, and when you throw homecoming on top of it it’s a great atmosphere,” head coach Jeff Voris said. “Our fans are unbelievable, they come out and support us. I truly believe this is the best home field in the PFL.”

The Butler offense got off to a fast start. Redshirt senior Sam Schrader found the end zone on a 11-yard pass to redshirt senior Cord Collier.

Here’s a look at that touchdown by Cord Collier. #GoDawgs pic.twitter.com/hs9cCCvqQ4

Schrader had his best game of the year. Along with his touchdown pass, he ran for 94 yards and had two touchdowns to lead the offensive attack.

Redshirt junior quarterback Will Marty played another turnover free football game completing 20 of his 32 passes for 191 yards. Marty’s only touchdown of the game came by way of his feet on a 9-yard touchdown run in the third quarter.

The Bulldogs rushed for over 200 yards on the ground for the third time in as many weeks.

“That’s where it all starts,” Voris said.”The offensive line has done a great job. Today we had to put multiple guys in there and every guy stepped up, competed and they do a great job communicating.”

Butler finished the game with 431 yards of total offense.

Not to be outdone, the defense forced two fumbles and an interception. Senior captain defensive back Isaak Newhouse recovered a fumble, picked off a pass, and added eight tackles to lead the defensive effort.

The Bulldogs will take their three game win streak to rival Dayton on Oct. 28.