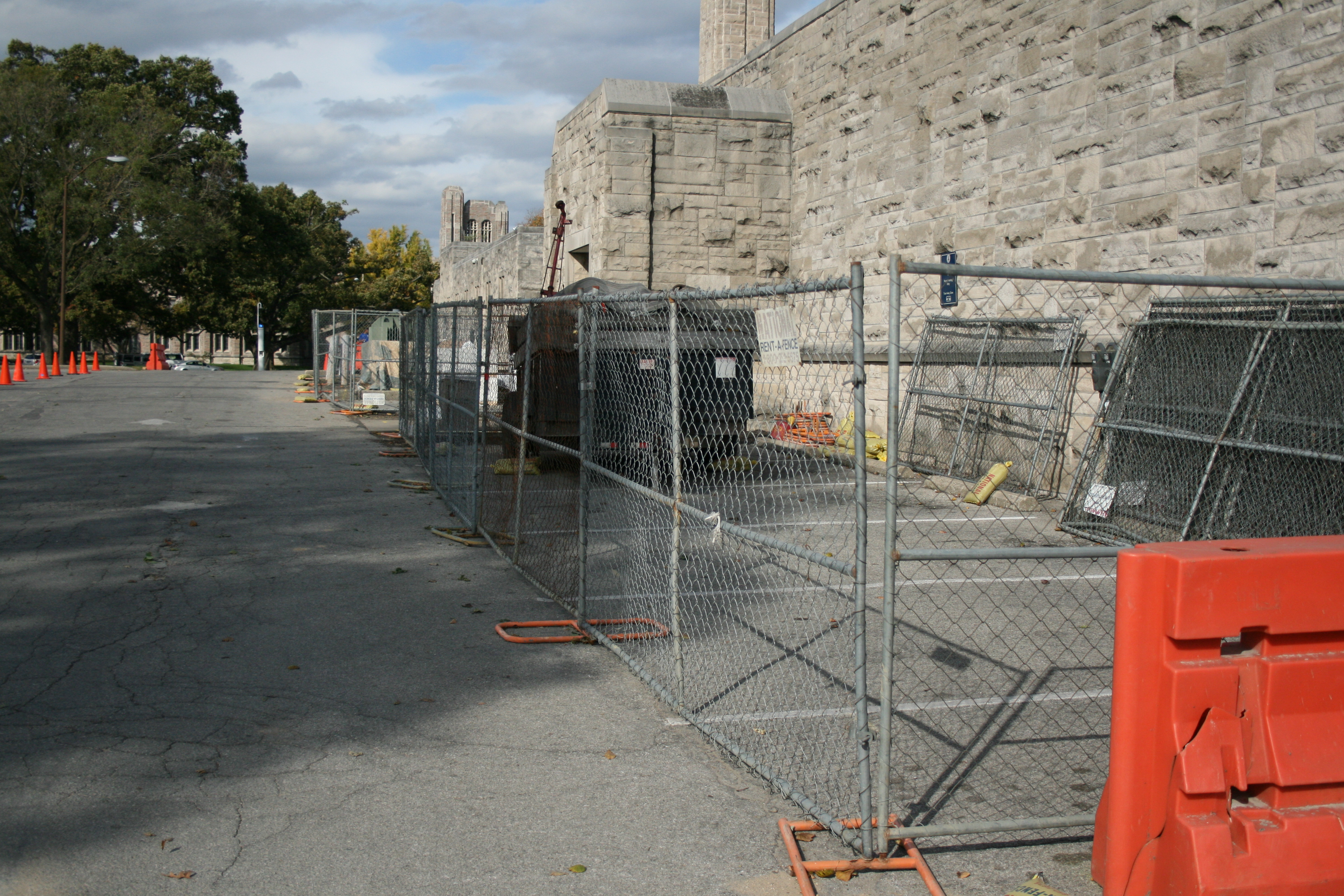 Construction on Atherton Union’s roof closed off parking spots and restricted access to the building’s west side. Photo by Zach Bellavia.

Someone was going to fall through the roof.

At least, that’s what employer assistant Kacey Shriner said it sounded like. The Internship and Career Services office, where Shriner works, is located on the top floor of Atherton Union. That day — when it sounded like someone was going to come crashing down — construction on Atherton’s roof started.

Shriner said people in the office knew construction was going to start, and were on high alert, but they did not know the exact time and were just a bit surprised. Shriner and her colleagues were not shouting over the noise, she said, but they definitely were not talking at a normal volume.

The construction, and the noise that comes with it, will likely not be done until April 2018.

Rich Michal, associate vice president of facilities, said five months is a conservative estimate — the roof may be done in February or March — but it depends on several factors such as weather and various activities planned in the building.

If there is a critical activity in Atherton, Michal said they will try to work around those hours.

Director of PuLSE Caroline Huck-Watson, who also acts as a director of the building, said a variety of activities could be deemed critical.

Huck-Watson, Office of University Events and others involved in the project have met several times and communicate weekly about events happening in the building and construction happening on the roof. She then updates everyone in the building about the construction, such as what portion of the roof will be worked on that day or what areas are blocked off.

“What’s been really nice, is all the folks around the table come to the table with a sort of, ‘What’s plan A and B and C,’ so we’re trying to think through ways to be ahead of things and make any necessary changes,” Huck-Watson said.

If there is a conflict with an event in the Reilly Room or a conference meeting on the third floor, Huck-Watson said the first step is to see if the event or meeting can be accommodated somewhere else on campus.

“If we can replace a roof quietly, 100 percent we would do it — I think we would all like that,” Huck-Watson said. “But since we can’t, we’ll do it as efficiently and as effectively and as thoughtfully as possible.”

Shriner said it is a good thing prospective student interviews took place earlier in the fall.

Tour groups, though, are still walking by the many construction sites on campus, now with Atherton added on the list.

Megan Richardson, junior political science and strategic communication major, said as a tour guide, it can be difficult maneuvering around the construction.

“For a while the walkway between Gallahue and Jordan was blocked off which interfered with the tour, and it was hard for parents and current students to believe that eventually it will look better,” Richardson said. “Hopefully it will be all worth it.”

She said due to construction, selling the school to families can be a challenge.

“A lot of parents don’t believe [the construction] will be done,” Richardson said. “But I tell them that the school did the same with Fairview and show them what can be expected.”

If activities and weather were not a factor, Michal said the construction could be done in 60 days. If campus is hit with an extremely bad winter, construction could extend even into May, although that would be a worse case scenario.

The roof will not look any different once it is done.

“It’s critical and important but you don’t necessarily, for the casual observer, see the difference other than hopefully, we got less roof leaks, less stained ceiling tiles,” Michal said.

The roof is made out of a bituminous material, a common material for roofs, but it starts to break down because of exposure to weather and the sun. Flat roofs, like Atherton’s, start to weaken due to outside pressure and needs to be replaced every 20 years.

In fact, Atherton’s roof is long overdue for a replacement Michal said.

Four years ago, Butler University underwent a comprehensive facility condition assessment where outside expert architects and engineers assessed the facilities’ conditions. On the list were roofs.

“So, we’re close to, basically for the first time, probably in 20 or so years, be caught up on roof replacement,” Michal said.

Irwin Library’s roof and skylight were replaced along with ResCo’s roof last year. Gallahue Hall and Holcomb Building’s roof will be renovated along with the rest of the sciences, which will possibly start June 2018 Michal said. Atherton’s was next on the list and has to be done before the interior, which will be undergoing renovations this upcoming summer.

“It’s just common sense,” Michal said. “You don’t want to spend millions of dollars on the inside and have it damaged by roof leaks on the outside.”

Twenty years from now, all the roofs will have to be replaced once more.

With the construction, the driveway between Atherton and Irvington House’s construction site is blocked off. Delivery trucks from Aramark, Starbucks and the bookstore now detour through the other entrance on West Hampton Drive, and pass Fairbanks Center to get to the load-off site. Students also cannot walk through the driveway anymore, a common route to and from Hampton.

Once Irvington is built, there will be a designated pathway for pedestrians — closer to the dormitory and blocked from the many cars and trucks using the delivery route.

While construction is underway, though, students should find another route to their destinations.

Morgan Skeries contributed to this story.