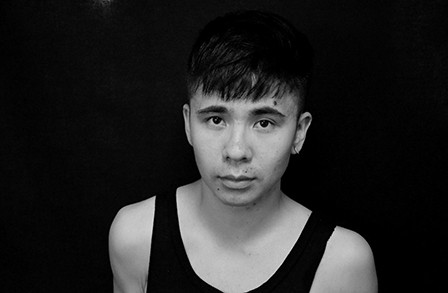 Ocean Vuong, an award-winning poet, is the third visiting writer to speak at Butler this year. Photo by Peter Bienkowski.

Award-winning poet, Ocean Vuong, will present at the Schrott Center for the Arts on Oct. 2 as Butler’s next speaker in the Visiting Writers Series.

His essays, short stories and poems have also been featured in publications such as The Atlantic, The Nation, The New Yorker, The New York Times, and The Village Voice.

Vuong has received honors from The Elizabeth George Foundation, the Civitella Ranieri Foundation, the Lannan Foundation, the Academy of American Poets and Narrative magazine. He has won a Pushcart Prize and is the recipient of a Ruth Lilly and Dorothy Sargent Rosenberg Poetry Fellowship.

Chris Forhan, an English professor and the poetry coordinator for the Visiting Writers Series, said Vuong truly exploded in the spring of 2016 when his first full-length poetry collection, “Night Sky with Exit Wounds,” was published.

“He just kind of rode this rocket to poetic acclaim,” Forhan said.

Included as one of The New Yorker’s eight Best Books of Poetry in 2016, “Night Sky with Exit Wounds,” won both the Whiting Award and the Thom Gunn Award. It was a finalist for the Forward Prize, the Kate Tufts Discovery Award and the Lambda Literary Award.

Chris Speckman, an English instructor who received his MFA in Creative Writing from Butler University, acknowledged that “Night Sky with Exit Wounds” did bring Vuong into the public eye. Yet, Speckman said he was a fan of Vuong’s work even before the poetry collection was published. Speckman had come across Vuong’s poem, “Someday I’ll love Ocean Vuong” in The New Yorker the year before, calling it one of the best poems he’s seen in the last five years.

“He’s innovative with language and has such power and passion in all of his lines,” Speckman said. “I think all of the attention that he’s gotten is well served.”

In his poetry, Vuong explores love, sexuality, family, memory, grief, war and melancholia through a multicultural and multilingual approach. He calls on his own personal suffering in hopes of connecting to the wounded of the world to make sense of human suffering as a whole.

Vuong is a Vietnamese American who was born in Saigon in 1988 to a family of rice farmers. At 2 years old he immigrated to the United States after spending time in a refugee camp.

Despite Vuong’s lack of personal memories in Vietnam because of his immigration to the United States at such an early age, his connection to the nation and the Vietnam war is deep-seated, for his maternal grandfather was an American soldier who fought in this war.

Forhan explained that the Vietnam War and all it entailed are, thus, ingrained in Vuong’s identity.

“He is a product of that war,” Forhan said. “Quite literally, if that war had never happened, he would never have happened.”

Vuong writes about his existence and its relation to the Vietnam War in his poem, “Notebook Fragments,” which reads, “no bombs = no family = no me.”

Once in America, Vuong was raised by his mother and grandmother in Hartford, Connecticut. It was not until he was 11 years old that Vuong learned English and became the first literate person in his family.

Speckman said Vuong’s education in English at a later age changed the way he approached the English language itself.

“He seems to have an appreciation and a love for a language that I think a lot of people who are born speaking English take for granted,” Speckman said.

Vuong eventually attended Brooklyn College of the City University of New York and went on to receive a MFA from New York University in 2016.

Vuong’s earliest poems aimed to immortalize the stories his family, and especially his grandmother, had told him about the history and tradition of his homeland of Vietnam. It was not until his grandmother passed away and he accompanied her remains back to Vietnam that he experienced his family’s memories firsthand since infancy.

Forhan added that the nature of Vuong’s identity as a Vietnamese American has had a significant influence on his work.

In an interview for The Well&Often Reader in 2013, Vuong said that his mother changed his first name to Ocean once they came to America “because, like the Pacific Ocean … I touch both nations but belong solely to neither.”

Karena Bakas, senior English creative writing major, said Vuong embraces all aspects of his identity in his work and refuses to use euphemisms for one subject while being candid about another.

Speckman also mentioned Vuong’s identity and its effect on his work.

“I think that the best poetry at its core is conflicted,” Speckman said. “I think having conflicting identities here with Vuong gives us this clear example of how this principle in poetry can really play out to a wonderful effect.”

Forhan said that the subject of identity in Vuong’s work is personal yet relatable, especially today.

“His voice and his sensibility are important in this moment because he reminds us of the complexity of identity,” Forhan said. “We all have multiple identities.”

Vuong is the third Visiting Writer to speak on campus this semester. The Vivian S. Delbrook Visiting Writers Series at Butler University is the largest of its kind, offering a total of 12 events this year.

Vuong’s presentation is at 7:30 p.m. at the Schrott Center for the Arts on Monday, Oct. 2. This event does not require tickets and is free and open to the public. For Butler students who attend, this event counts as a BCR credit.

The following day, the Efroymson Center for Creative Writing will host a Q&A with Vuong at 11 a.m. This event is free and open to Butler students, faculty and staff.