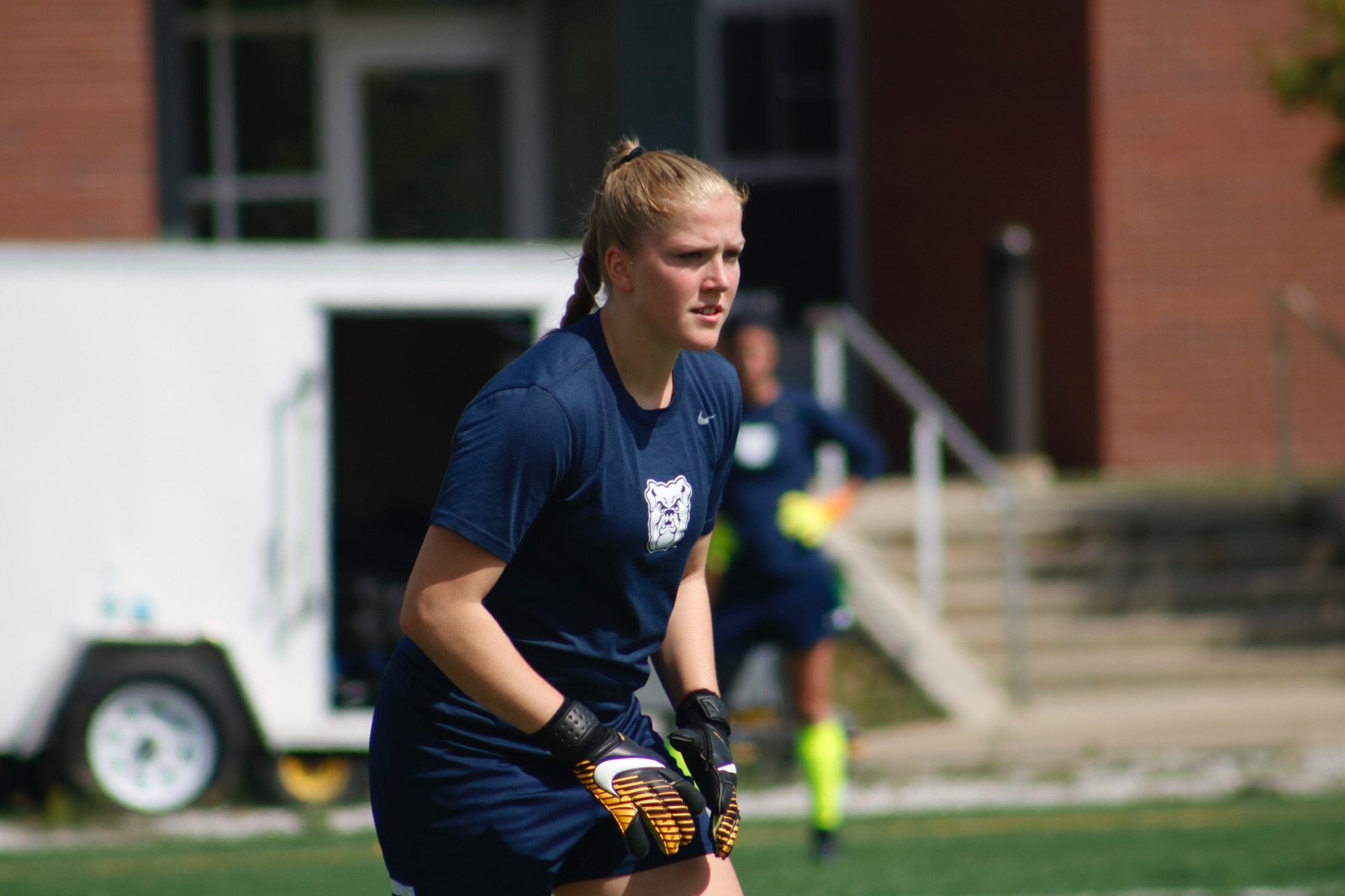 It all started last year. On a whim, current freshman and Butler women’s soccer goalkeeper Leonie Doege wanted to try something new.

An organization in Germany was looking to send women’s soccer players to the United States for college. Doege began talking to collegiate coaches. The one that stood out to her was Robert Klatte, Butler women’s soccer assistant coach.

“The reason I chose Butler was because of Coach Klatte,” Doege said. “With him as a goalkeeper coach, he knows exactly what I need, what I need to practice on. And what I need to get better in.”

Unlike most incoming freshman, Doege has national team experience. She made her debut for the German national U16 team in 2014. In 2016, Doege played in 12 games with the U17 team. The team won the U17 European Championship in penalty kicks over Spain and went on to reach the quarterfinals of the U17 World Cup in Jordan.

Doege has also played association soccer in her home country. She joined the Bayer 04 Leverkusen association team in 2014. Beginning in 2015, she was moved up to the first team. Doege would only play one game for Leverkusen on the German top league, Frauen Bundesliga, this May before coming to the United States.

Since leaving her hometown of Langenfeld, the 18-year-old Doege has not skipped a beat. After her first two games with the Bulldogs, Doege was named the Big East goalkeeper of the week.

“I think that’s a big honor, especially if it’s the first game,” Doege said. “But it’s still the team. I couldn’t have performed my best if the team hasn’t saved me sometimes.”

Since earning the recognition from the conference, Doege has split the time at goalkeeper with redshirt sophomore Hannah Luedtke. The pair have combined to shut out their last four opponents.

“I love the other goalies,” Doege said. “We get along great. In practice, we push each other. And I think that really helps the competition.”

Doege said it has not been as easy as it looks. The adjustment to the style of play and the strength and conditioning in America is vastly different from Germany. In Germany, the team as a whole does not spend much time lifting weights. Here, the team spends time every week in strength training.

“Here, it’s more physical,” Doege said. “Because you have all these breaks and then you can give your 100 percent again.”

Doege joins sophomore midfielder Maeve Burger as the two players from Germany on the team. Burger said that from the minute Doege joined the team she has been an important part of the squad.

“Leonie’s a super hard-working player,” Burger said. “She’ll go out any time whenever I’m out there. I’ll say, ‘Want to go work?’ and she’ll be out there in two minutes and it’s really awesome to have someone like that on our team.”

There are times where Doege said she thinks she’s a little homesick. It is more than a 12-hour flight from Indianapolis to her suburban home in Düsseldorf. But she said the move has been easier than she thought it would be.

Fellow freshman goalkeeper Stephanie Rodriguez has enjoyed the competition with Doege in practice.

“We are constantly pushing each other to get better and learn from each other,” Rodriguez said. “She’s helped me be more aggressive off crosses and at the same time I’ve helped her learn a lot of terminology needed to be vocally active in practice and games.”

Doege said she has adjusted to classes and living on campus quickly. She’s been taking English language classes since third grade, so she said the language barrier has not been too strenuous for her. She said her teammates continue to help her to get to know American culture.

“They’re all very helping,” Doege said. “They always make sure I’m not alone and take me out to dinner. It’s super easy for me living here.”

At the same time, Burger and Doege can have their own conversations that nobody else on the team will understand. These things include keeping up with their favorite German professional teams or making German jokes.

“We kinda sometimes like to make fun of the Americans,” Burger said. “Like American food or things they say. They don’t really get it, but it’s super funny to us.”

Doege and the rest of Butler women’s soccer team will face No. 10 Texas A&M University in College Station, Texas on Sept. 8 at 8 p.m.