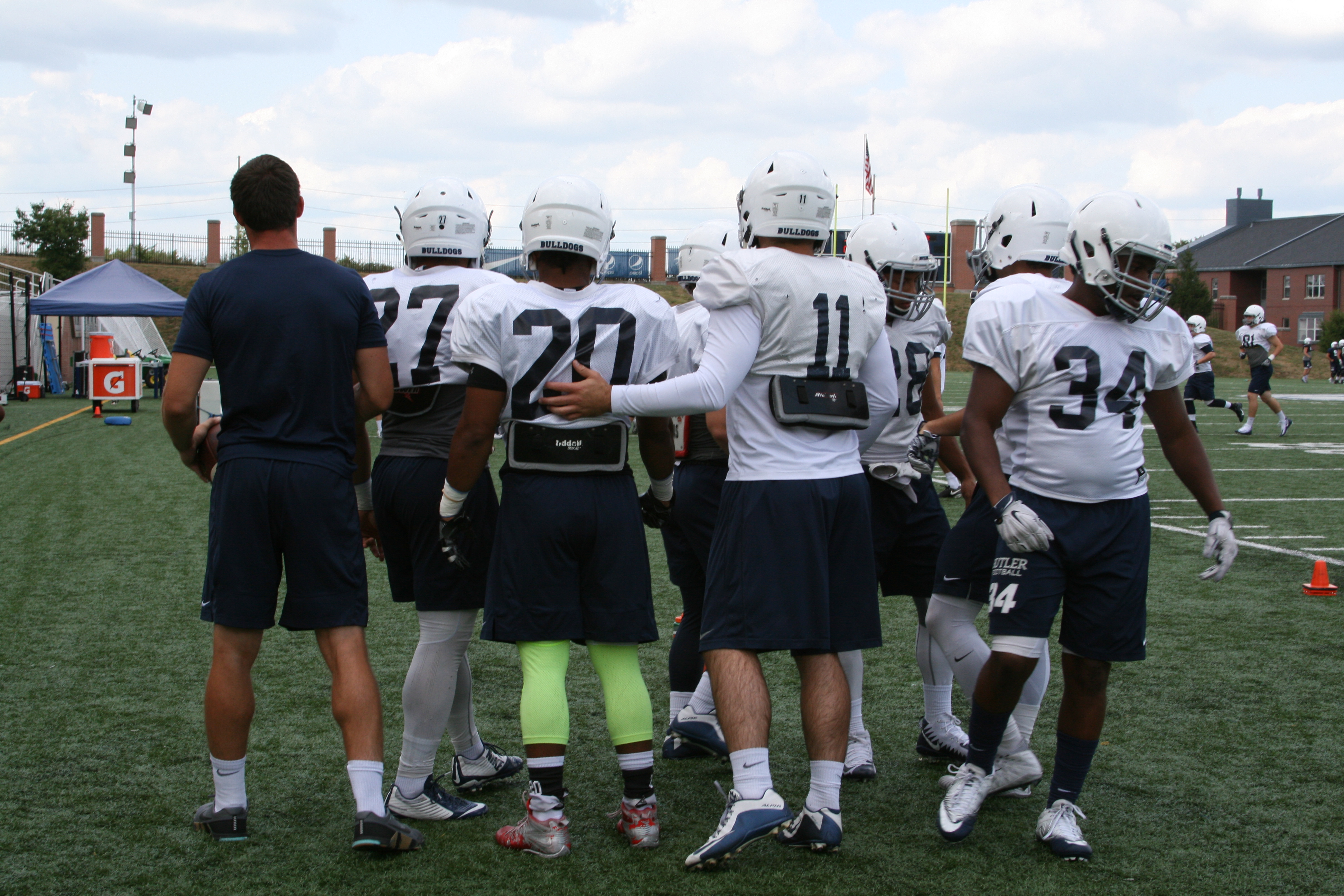 The team prepares during practice for the first home game of the season. Butler is 1-1 this year. Collegian file photo.

Butler football takes the field at the Bud and Jackie Sellick Bowl for the first time this season on Saturday against Taylor University.

Prior to kickoff, there will be a ceremony for the dedication of the newly named athletic field, formerly known as the Butler Bowl. The field was renamed the Bud and Jackie Sellick Bowl last April after Butler received $9.4 million from the Sellick estate. Bud and Jackie both graduated from Butler University in the mid 1940s.

After playing their first two games on the road, Connor Andras, senior captain and defensive lineman, said he is excited about the chance to play in front of a home crowd.

“The crowd is a huge advantage,” Andras said. “It’s always great to play in the Bowl and usually we have a great showing and they are always loud. When we make a touchdown and get a stop they are always cheering. The atmosphere of it all helps us play better. I can’t put my finger on it, but something about playing in the Bowl is special.”

Butler looks to improve on a 1-1 start to the season and win back-to-back games after a balanced and efficient offensive attack led them past Franklin College last week.

Redshirt junior quarterback Will Marty threw for 313 yards and three touchdowns against the Grizzlies. The running game was just as effective. Duvante Lane, redshirt senior running back, ran for 117 yards and added two touchdowns of his own.

Last year, Butler defeated Taylor 27-14 behind 235 yards on the ground. Lane was effective in that game as well rushing for two touchdowns.

Butler will have their hands full with a strong, experienced defense. Taylor returned four of their five top tacklers from 2016 led by senior linebacker Cameron Gray and sophomore defensive back Matt Nguyen.

“Taylor is huge upfront,” Sam Schrader, redshirt senior running back, said. “They have two tackles who are around 300 pounds, and they’ve given us fits in years past running the ball. They have a lot of experience on the back end and their linebackers are quick. They are really strong up front and quick on the back line.”

Taylor forced two interceptions and sacked the quarterback four times in their season opener against Malone University. Butler head coach Jeff Voris said being efficient on first down and controlling the line of scrimmage will allow the Bulldogs to stay out of those third and long situations.

Butler’s defense had a rough start to the season giving up 45 points to Illinois State, but bounced back in the win against Franklin. The team got off to a fast start, forcing a safety in the game’s first minute and an interception in the first quarter.

“The thing we have done well the first two weeks is the urgency of our preparation and how we have mentally approached the opening kickoff,” Voris said. “We have played really well in the first quarter. What we did well last week was taking advantage of the opportunities the other unit gave us; we played great complimentary football and that’s what we didn’t get accomplished at Illinois State.”

Similar to Butler, Taylor brings a balanced offensive attack to the football field.

“Taylor is very balanced and they have a good offensive line and a seasoned quarterback,” Andras said. “The balance really throws us off. Unlike Franklin who wants to air it out, Taylor wants to establish the run and then go into play action and keep you guessing on defense.”

Taylor comes into the game with a 1-0 record after a 28-21 victory over Malone. The Bulldogs have won the last three meetings against the Trojans dating back to 2014. It is Butler’s final nonconference game before they travel to San Diego to begin Pioneer League play.

The dedication of the Bud and Jackie Sellick Bowl will begin at 5:15 p.m., followed by kickoff at 6:30 p.m. The game will also be streamed on Facebook Live through the Butler athletics Facebook page.