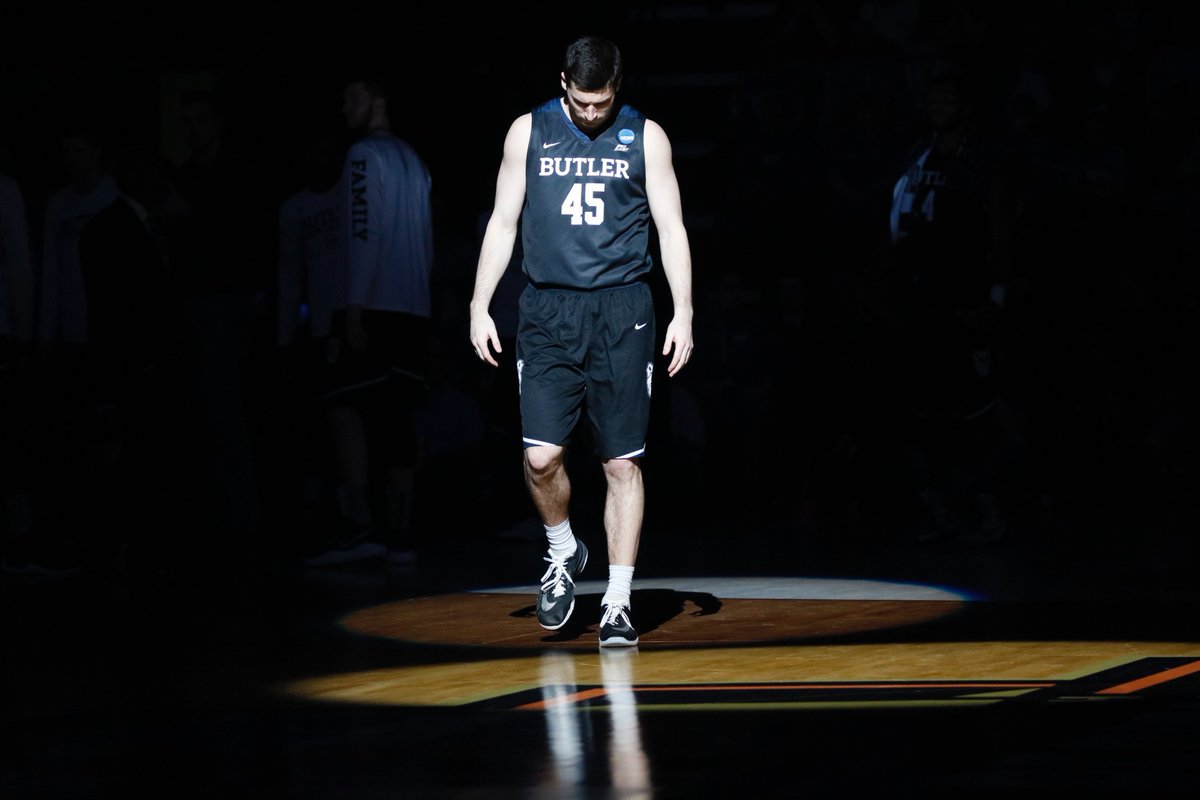 My name is Zach Eaton, and I am currently heading into my sophomore year at Butler University. I truly could not love a place more than I love Butler. The drive to campus to start my first year was not an unfamiliar route for me.

Butler has always been a part of my life; I am proud to say that I am a third generation Butler student. My grandfather, Chris Theofanis, worked as director of community relations at Butler, a career that spanned about 44 years. His brother George Theofanis was the successor to the legendary Tony Hinkle as head coach of the men’s basketball team.

“The Butler Way” is a term that is certainly used in conjunction with athletics and is well known now throughout the country due to the great success of the men’s basketball program. To me, the Butler Way is about being selfless, working hard and remaining humble. It is about the trust gained among people who share the same goals. It is about relationships.

Although Butler recently hired LaVall Jordan, in my 15-or-so years of being a die-hard Bulldog fan, I have seen three major coaching changes that have had a huge impact on my life. The Butler Way has been my way. Now, I find myself wondering if that Way needs to be re-paved.

This story begins at the 2006-2007 season. The Dawgs, led by Coach Todd Lickliter, had received an at-large bid as the No. 5 seed in the Midwest.  Butler found themselves playing a team that would soon have back-to-back National Championships: the Florida Gators. The game was being played in St. Louis, and my family decided to make the trip. My parents pulled me out of school that afternoon, and we headed to Missouri.

Coming into this game, Butler was hardly known by anyone across the country. We were still just a small team with something to prove. No one had given us a chance to even compete with Florida. Why would they? Unless you had a relationship with Butler basketball, there’s no way you could know their potential.

Although the outcome wasn’t the one that we wanted, the small school called “Butler” started to get a little more attention and recognition. Despite the loss, this game truly made me believe in The Butler Way. With Lickliter leading the way, it seemed like the program was ready to make a big jump. Or so I thought.

It was April 1, and I was spending spring break with my family in Florida when I got a phone call. My friend back home told me that Lickliter had just agreed to become the next head coach for The University of Iowa. I thought it was an April Fool’s prank, but in that exact moment, the radio confirmed it.

I started crying in the car. It did not make sense to me. I was just a third grader who believed in Lickliter and The Butler Way. I never thought we would return to another Sweet Sixteen game and get a chance to prove ourselves again. But then along came Brad Stevens.

Like most, I knew little about Stevens. With a new coach came new excitement, and I was optimistic for the Dawgs. A fan of Butler or not, most can recall how magical things turned out. Stevens took the team back to the Sweet Sixteen just three years later. The Dawgs danced through the tournament in a fairytale story that led them to the Final Four in 2010.

Butler, a small Horizon League school, was going to play just ten minutes down the road in Indianapolis for the Final Four. We were on the map. We canceled our spring break plans and headed to Lucas Oil Stadium to watch the Dawgs play against Michigan State. An unbelievable game and win had my favorite team in the world just one win away from being National Champions.

As we walked to the stadium that Monday night for the Duke game, I quickly cut left into an alley and began to get sick. I used to do this before many Butler games because I would get myself so worked up and excited. Time was never slower than when we watched that ball launch from Gordon Hayward toward the rim and just miss. The one chance we had to win a national championship was now gone. I was shocked and heartbroken.

Fast forward to the following year. Butler was, amazingly, back at the Final Four. Our family was in a Florida restaurant designated as an official viewing party site for the game. When the buzzer went off for the Bulldog win, we knew we were headed to Houston for Monday night’s game.

At the time, I was on crutches with a broken ankle. So, on one foot, I hopped down at least 80 steps at formerly named Reliant Stadium, not even caring because I was so excited. This was the year, I thought. Boy was I wrong. After one of the worst national championship games ever, I left the last college basketball game of the year in utter shock and disappointment. Again. However, I would never stop believing in the Butler Way. We had Stevens, and he could work magic.

In July 2013, my family and I were in Times Square, where there is a giant NBC news ticker that displays headlines for the day. I saw Stevens’ name on the ticker but did not see the rest of it as it faded away. It reappeared 30 seconds later, and from a ticker in New York City, I learned that Stevens had taken a new job as the head coach of the Boston Celtics. This time, I didn’t cry, but for a moment, I lost all hope.

Now it’s June 2017. Butler has completed yet another search for a head coach after Chris Holtmann abruptly decided to go to Ohio State. I could talk about what it was like to rush the court after beating Villanova or watching the Dawgs beat up on the Indiana Hoosiers at Bankers Life.

But I am tired of repeating myself. I am tired of falling in love with a coach and being so hopeful, then seeing that they are onto something supposedly bigger and better. We are now in the Big East playing high-major teams and top-level recruits every game.

You can’t blame Lickliter for leaving the Horizon League for the Big Ten. And you certainly can’t blame Stevens for heading to the NBA. Holtmann, though? I can’t lie, Butler nation: this one hurts the most by far.

I am still trying to point the finger at whom to blame. Is there someone to blame here?

You could blame Holtmann for always having bigger dreams than Butler but certainly never hinting that was the case. You could easily question why a Big East team with the best recruiting class in the last 20 years is still being used as a stepping-stone for coaches. You could also blame the school. As a student at Butler, I do take great pride in Butler’s commitment to excellence in academics.  I wouldn’t want to cut pay or budgets for faculty or administrators, but I do wonder about how athletic dollars are spent.

How can we once again let an amazing coach slip out of our hands because we seemingly are not willing or not able to match what other schools are paying despite the fact they are not as successful as we are?

Butler Basketball has done so much for this school in terms of recognition, national standing and financial gain. So many fellow students at Butler, including my first-year roommate, became aware of Butler solely because of the basketball team. We have done an amazing job finding replacements after each coach has left, but we have also been lucky.

Or so I thought. Now I see that we are simply a breeding ground for these up-and-coming replacement coaches. The Butler Way has made us what we are today, but to think that we will always have magical seasons just because of “The Butler Way” alone is a flawed, even ignorant, mindset.

I want our next coach to be a coach that we have for a lifetime. I don’t want to get a phone call, or read off a news ticker, or see a tweet anymore about another coach leaving our program. I have all the faith in Barry Collier and the others who are in the process of naming our next coach. I hope that they have selected a coach who will commit to be at Butler for the long haul.

I want a coach that wants to be at Butler to emulate and further develop the Butler Way, rather than just using Butler for the next opportunity. I also want our school to back up this coach by paying him the amount of money a big time, winning Big East coach deserves to be paid, despite how small our school is. As a former player and assistant coach for the Dawgs, Coach LaVall Jordan knows The Butler Way.

To the Butler administration, alumni and anyone that loves this school and loves Butler basketball, let’s pay our dues back to this program that has given us so much joy over the past years. LaVall Jordan is ready to coach and stay here at Butler, “ever do or die,” and no better paying job will take him away.

I love this school. I will always believe in The Butler Way, because it has shaped me throughout my life. I dream of taking the next generation to Historic Hinkle Fieldhouse and telling them that The Butler Way was re-paved by a head coach who began his career in June 2017 and is still there making that Way as legendary as Hinkle himself.

To Coach Jordan, welcome home. Show us The Butler Way, and let it always lead us to Hinkle Fieldhouse.