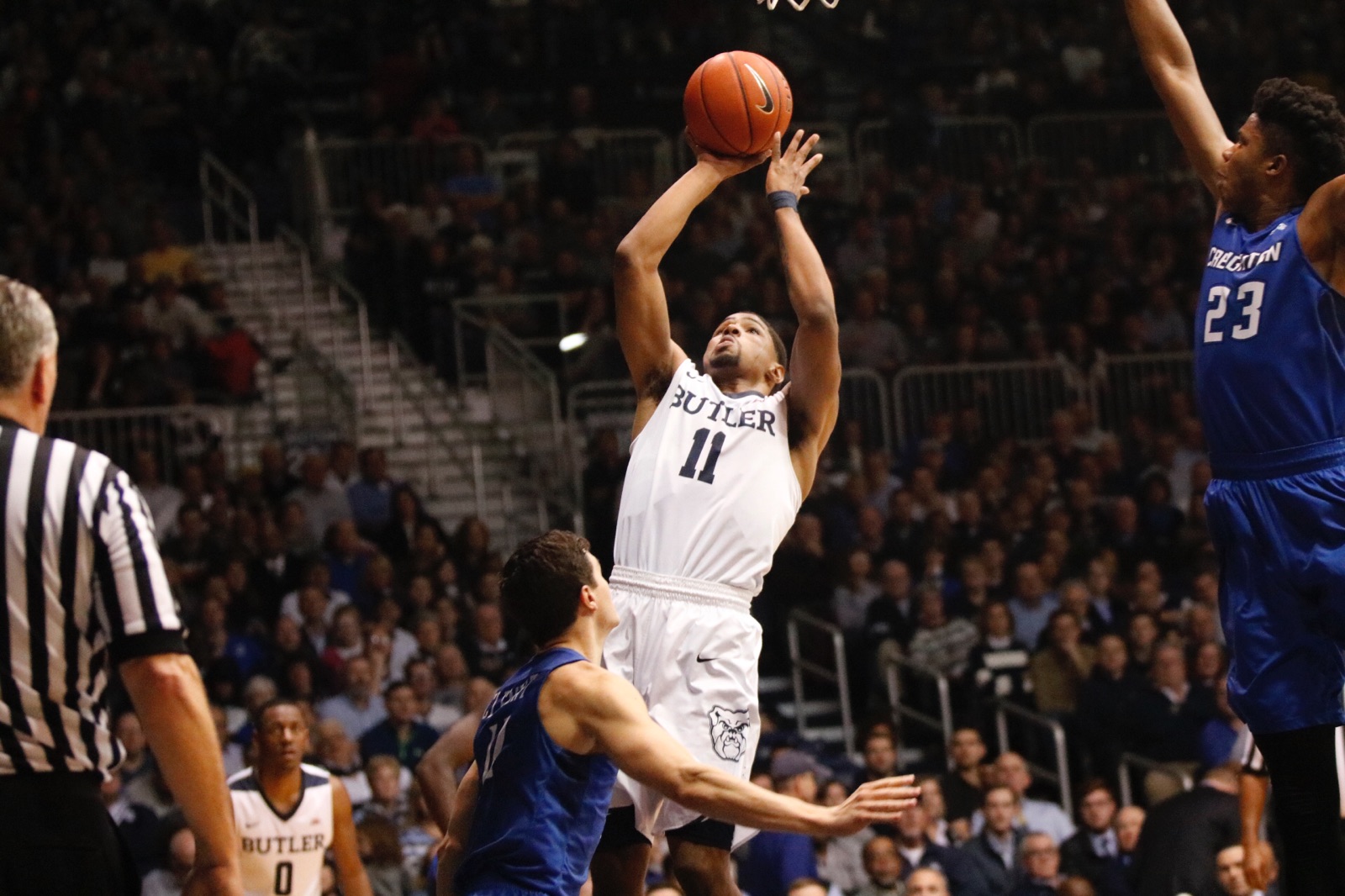 Kethan Savage rises for a jump shot in the lane against Creighton. Photo by Jimmy Lafakis.

The Bulldogs couldn’t contain Creighton’s seven foot center, Justin Patton, who scored 15 points on 7-of-10 shooting and grabbed seven rebounds. Patton said he knew he would be relied on heavily in the second half because he had fresh legs due to his lack of minutes in the first half caused by early foul trouble.

A strong interior presence paired with shooting 62 percent from three point range (13-of-21) proved to be too much for Butler to handle.

“Similar to the Georgetown game, never once did I feel like we were defending with any kind of purpose at all,” head coach Chris Holtmann said. “And as much film as we showed them and as much as we harped on it, that’s disappointing.’

Bluejay guards Marcus Foster and Khyri Thomas each finished with 15 points as well. Thomas was 4-of-5 from three point range.

Cole Huff contributed nine more points for Creighton’s cause by shooting 3-of-4 from three point range.

Justin Patton helped @BluejayMBB win a tough #BIGEASThoops road game with a strong effort on both sides of the floor.

With the loss, the Bulldogs are now 20-4 following a loss under Holtmann, and Creighton swept the regular season series after beating Butler 75-64 in Omaha, NE, on Jan. 11. Also, Butler now owns an 11-2 record when playing in Hinkle Fieldhouse this year.

For Butler, Kamar Baldwin paced the team with 14 points, and Kelan Martin was the only other Bulldog in double figures with 11 points; he also snagged eight rebounds and turned the ball over four times.

Andrew Chrabascz finished with a 3-of-13 shooting performance and six points. Kethan Savage, who was averaging 12.2 points per game in Big East play, also ended with six points. The Bulldogs, who entered the game with a 9.8 turnovers per game mark, turned the ball over 13 times.

“We turned it over in transition a couple times, I thought that hurt us,” Holtmann said regarding a scoring drought his team suffered in the first half. “We had some rushed and empty offensive possessions that got them on a run.”

After one half of play, the Bluejays led 37-33. For the majority of the half, they were without their star big man, Patton, due to early foul trouble. Creighton drained eight three pointers (8-of-12) to make up for Patton’s departure. Butler began the half shooting well but for roughly seven minutes (9:20 to 2:18), they failed to record a field goal.

“Right now, we are not good enough to play without grit and purpose defensively and beat anybody in our league, we’re just not,” Holtmann said.

The Bulldogs have a week off before they travel to visit the Marquette Golden Eagles on Feb. 7 at 9 p.m. on CBSSN in Milwaukee, Wis. In their previous meeting, Butler needed a 63 point second half to pull off an 88-80 comeback after trailing 41-25 at the half.