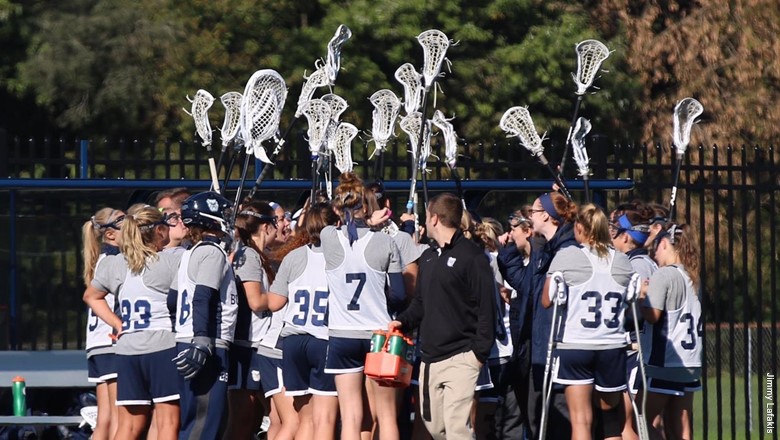 The Butler women’s lacrosse team huddles during a scrimmage. Photo via butlersports.com.

We live in an era where women in America have more athletic opportunities than their mothers and grandmothers, yet their achievements on the field are backdropped by misogynist rhetoric.

The first time it happened to me, I was 15 years old.

I couldn’t see his face, his voice only traveling across the street from his pickup truck stopped at the light. He couldn’t — no — he was yelling at me? It was January, and less than 20 degrees that day. How do sluts run? Do we run like any other human in the middle of a Chicago winter? Pants, layers of jackets, gloves and a hat? Was I running like a slut?

I fled the scene, snow flying off my shoes, caught in a wreck of fight-or-flight. I struck the ground just a little harder, but only enough so I’m the only one who knows how much it bothered me.

“Being yelled at on the street, whether you’re running or walking sends the message that you’re not safe on the street,” Olivia Pratt, a Butler University track athlete, said.

And the man yelling from his truck? I can see his face now. He’s my neighbor, a classmate or my brother’s friend. He’s that guy I pass in the halls, or the man in the grocery store. The man in the truck is not everyone. But he’s someone. And my president chooses not to see it, but stokes the fire.

Since the inauguration of President Donald Trump, my mind has been caught in an intellectual state of fight-or-flight. It comes and goes in an inexhaustible wave, wrought by rhetoric that thrives on stripping away women to a face and nothing more.

One sentence in a 1992 interview with New York Magazine reduced German figure skater and gold-medalist Katarina Witt to a body. Never mind the heart it took to compete at such a level because her heart lies beneath breasts.

“Wonderful looking while on the ice but up close and personal, she could only be described as attractive if you like a woman with a bad complexion who is built like a linebacker,” Trump said.

His “locker room talk” inches into my life. It threatens to take away every female athlete I’ve ever looked up to and degrade them to body parts.

“Sticks and stones may break my bones, but words will never hurt me.” In light of Trump’s presidency, the biggest childhood lie I always took comfort in can no longer comfort me. His words leave me raw. His words take my legs out from under me.

And for someone who has always relied on my legs to log miles of running, suddenly I don’t know where to go from here.

“I wish that they could experience what it’s like to be a female athlete,” Kelly Murphy, a Butler women’s lacrosse player, said. “Being a college athlete is the hardest thing that I’ve had to do mentally or physically, and I don’t think the fact that I’m a woman should change that.”

Murphy is part of a team that until last year, didn’t exist at Butler. The program is the second Division I women’s lacrosse team in Indiana thanks to Title IX, a law protecting equal opportunities in collegiate athletics.

The pathway to progress is paced by one step forward and two steps back. When the 44th president can welcome the U.S. Women’s National Soccer Team, the 2015 FIFA World Cup champions, into the White House, it’s easy to settle for that kind of progress.

They are the best of the best, the generational result of Title IX where American women are winning on a global stage and female coaches in the NFL are a reality.

“That wouldn’t even be a dream that could be a drop in the ocean if we hadn’t had Title IX,” Stacie Colston Patterson, Butler’s Title IX director said. “There’s no way those women would’ve had those opportunities if they didn’t experience college athletics in a way that was meaningful to them.”

But our very best are still fighting for an equal playing field — literally and figuratively — in a reality where female soccer players can’t raise the issue of playing on turf fields without being called soft.

The forefront of the fight for equal rights in women athletics isn’t legal action anymore.

It’s a fight for how we are perceived once we are on the field. It’s the freedom to be unapologetically daring in our audacity to envision progress and make it a reality.

It’s to run on the strength of our own two legs.

Not only because it’s an inherent right, but because we worked for it.