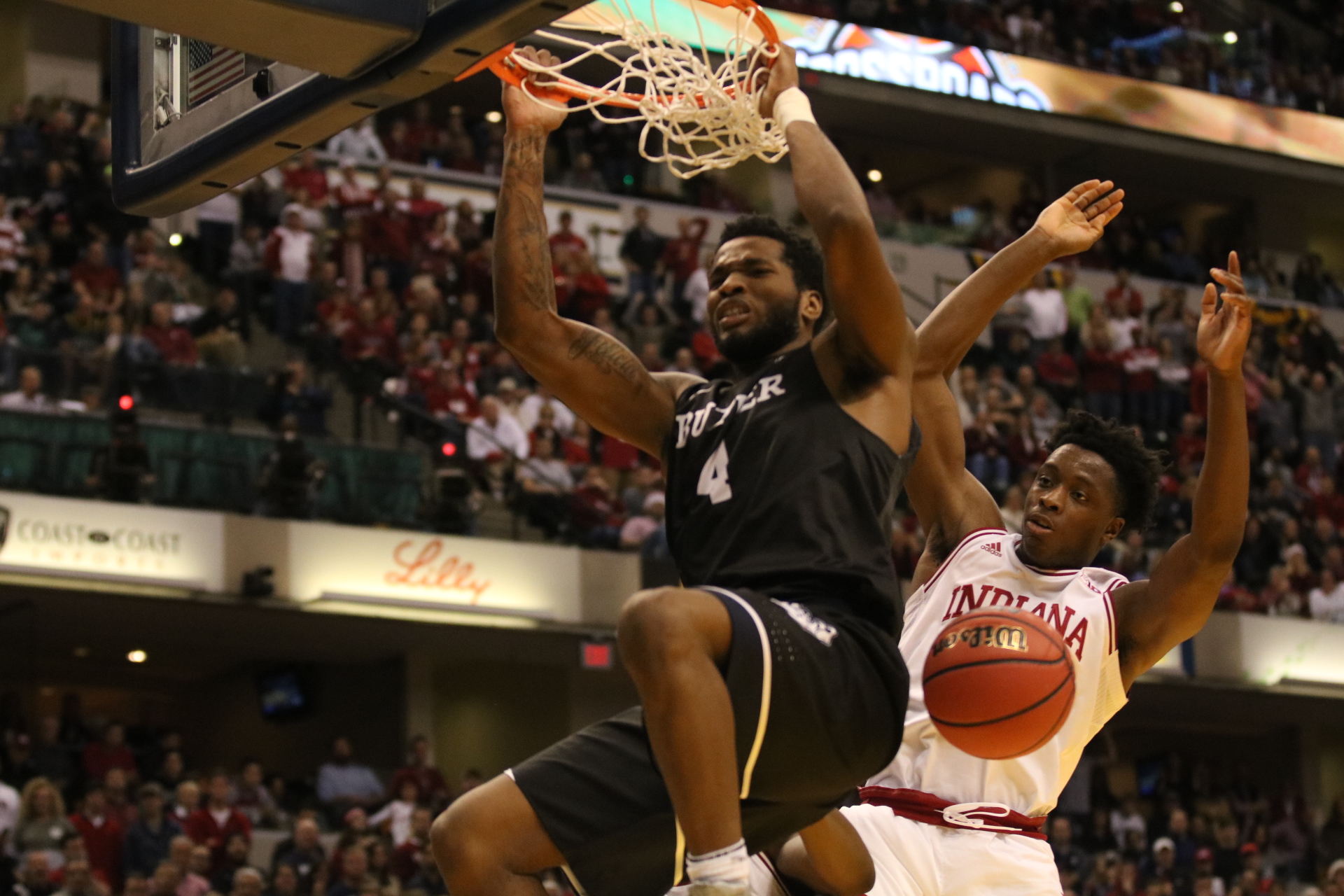 Tyler Wideman dunks the ball late in the game against Indiana University, sealing the win for the Bulldogs. Photo by Jimmy Lafakis.

No. 18 Butler University handed No. 9 Indiana University their second loss of the season 83-78 in the Crossroads Classic to advance to 10-1 on the season.

“I’m really proud of our guys for that win,” Butler head coach Chris Holtmann said. “We played a heck of a team. I felt like this, over time I’ve coached against some of Tom’s teams; they’re one of the toughest teams out there. I have so much respect for him and how his team plays.”

Defense was a weak point for Indiana all day, and head coach Tom Crean took note of that.

“The most disappointing thing for us was our defense,” he said. “I don’t need to look at the film to know it was that bad. We were right in the game and I wasn’t fearful. I knew we’d make shots in the second half. But I never liked our spirit defending. Its disappointing. I’m going to be really, really disappointed when I look at the film. Having just a hand up isn’t enough.”

The game started as many expected it would: Indiana stole the ball and scored an easy layup. After another basket, Butler was down 6-0. But a 3-pointer from Kamar Baldwin sparked a fire in the Bulldogs.

Baldwin went on to score the first five points for Butler. Then a 3-pointer from Avery Woodson gave Butler the first lead of the game, ensuing a back-and-forth game for several minutes.

The two teams traded leads and tied for most of the first half. But consecutive 3-pointers from Kelan Martin and Andrew Chrabascz gave the Bulldogs their biggest lead of the game, one they never relinquished.

The second half was a continuation of Butler’s dominance for most of the half. Butler held their largest lead of the game at 16 points.

Indiana made a late game run and closed within two points of Butler, closing in thanks to a 3-pointer from James Blackmon.

A run of good fortune hit Butler, including a dunk by Tyler Wideman on an inbounds play that wreaked of the old Butler Bulldogs and a perfectly timed foul for Tyler Lewis.

Indiana made one final shot, but Baldwin smacked the rebound out of bounds with 1.5 seconds remaining, sealing what might be the biggest win for Butler so far this season.

Martin led the way for the Bulldogs with 28 points, four rebounds and two assists. Chrabascz and Baldwin each scored 14 points to add onto the victory.

Kelan Martin shows off his goggles after getting fouled on a made 3-point basket. Photo by Jimmy Lafakis.

For Martin, 28 points comes as a surprise as he failed to shoot the ball until 10 minutes into the game and rarely shot in the final 10 minutes of the game. But as Holtmann said, that was vital to the team’s win.

“[Kelan’s] patience was critical in our win,” he said. “This was a fun game, and of him, our leading scorer, to be this patient is a real good sign. Theres sometimes when you’re a coach and there’s a guy like him … you kind of just let him play a little bit.”

Martin said he wanted to evaluate what was on the court before he went all out.

“I was seeing how they were playing me,” he said. “I started gaining confidence in myself as the game went on.”

For Indiana, Blackmon scored a team-high 26 points. Thomas Bryant followed behind with 15 points of his own.

Indiana outnumbered Butler on turnovers 13-6 in the game. And it is something Crean knows cost the Hoosiers the game.

“The turnovers turned into points and I can’t even think about that right now,” Crean said. “Outside of a couple things, I felt like we prepared for what they did. They got us on that inbounds play [that resulted in the Wideman dunk], but I could have made that layup with people just standing there.”

Butler returns to the court Dec. 21 against Vermont. The game is set to tip off at 7 p.m. at Hinkle Fieldhouse and can be seen live on Fox Sports Network.