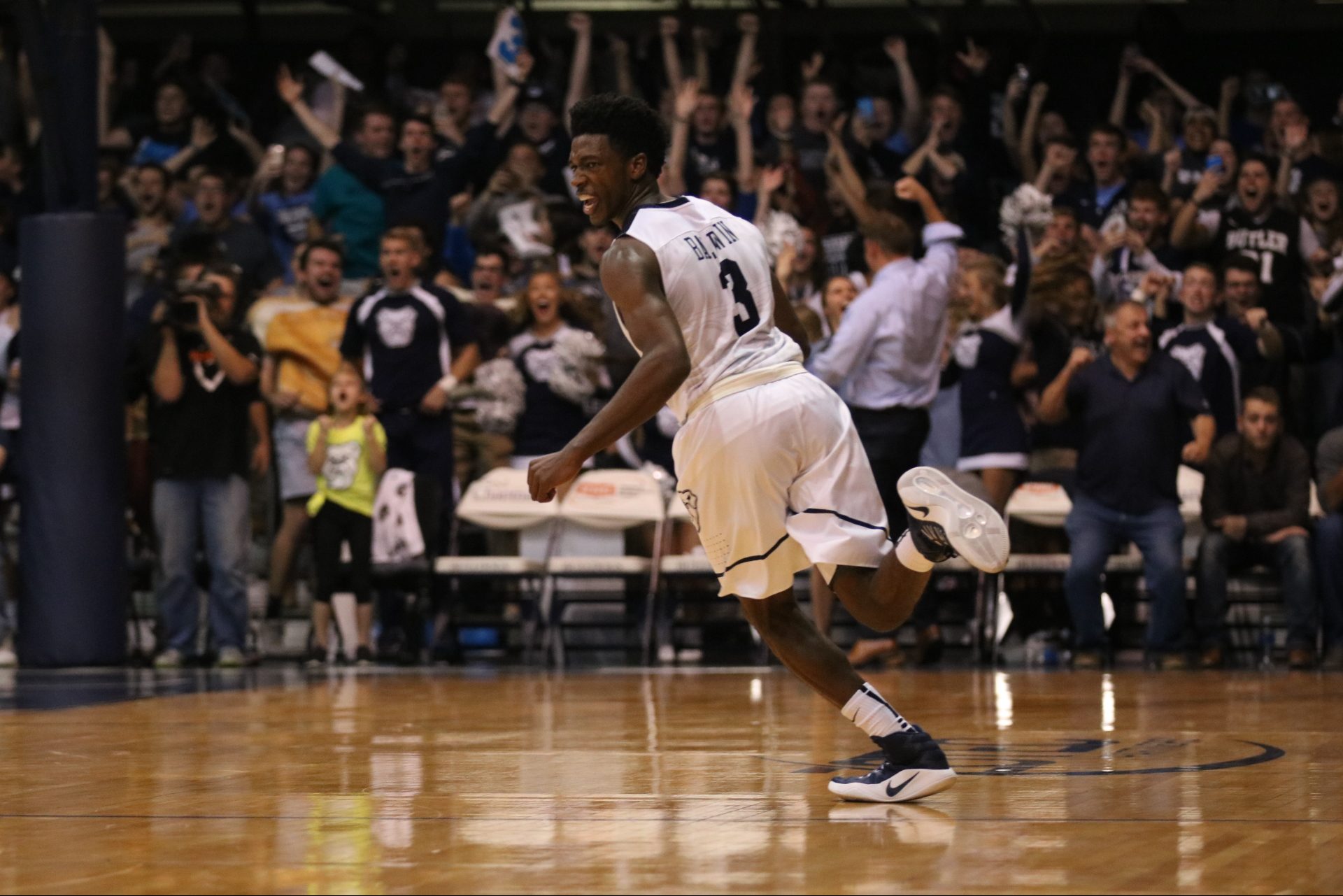 Freshman Kamar Baldwin runs back down the court after hitting the game winning shot just moments ago. Photo by Jimmy Lafakis.

Kamar Baldwin drilled a deep two point jumper with .5 seconds left in the game to earn the Butler University men’s basketball team a 70-68 win over the Northwestern Wildcats on Nov. 16 in Hinkle Fieldhouse.

After swiping the ball away from Northwestern’s talented point guard, Bryant McIntosh, with 30 seconds left in the game, Baldwin gave the Bulldogs a chance to call a timeout and draw up a last second play.

With the game tied at 68-68 and 13 seconds left, head coach Chris Holtmann called for a pick and pop play between Baldwin and Sean McDermott. McDermott’s defender, 6 foot 8 inch forward Gavin Skelly, switched onto the 6 foot Baldwin, which meant the freshman guard would take the last shot.

The left handed Baldwin drove to his dominant side from the top of the key, dribbled behind his back to the right in order to create separation and hit a contested shot just inside the three point line.

“Just make the right decision,” Baldwin said during the postgame press conference when asked what he was thinking during the last timeout. “Since they switched it, [I] had the matchup and just went and made the play.”

As far as the bigger picture for the season, Holtmann said, win or lose, his team learned a lot throughout the course of the game.

“We had some new guys that were probably more nervous tonight than I had seen them,” Holtmann said. “I think that’s good to kind of get that out of our system.”

Upperclassmen Andrew Chrabascz and Kelan Martin helped the Bulldogs succeed in the second half.

Martin scored a game high 22 points while Chrabascz added 13 points and 7 rebounds. 11 of Martin’s 22 came during a roughly five minute stretch to start the second half.

Chrabascz banked in a right handed hook shot to give Butler the lead with 2:32 left and made one free throw to tie the game at 68-68 with 53 seconds left.

The senior also stepped up and made a three pointer out of a timeout earlier in the second half when the Wildcats had momentum and the lead.

“I thought the three Drew hit, down five out of the timeout, just kind of settled us down a little bit,” Holtmann said. “That’s a big play for a senior to make.”

That three pointer worked out well for the Bulldogs, but they ended up going 7-of-23 from behind the arc against the Wildcats. Holtmann said the offense needs to take better shots, move the ball around more and trust each other in order to improve their offensive game.

On the other side of the ball, Butler (2-0, 0-0 Big East) allowed Northwestern (2-1, 0-0 Big Ten) to end the game with a 48 percent field goal mark, but when it mattered most down the stretch, the Bulldogs put together multiple defensive stands to set up Baldwin’s clutch shot.

Moving forward from this tightly contested game, Butler is scheduled to play the Bucknell Bison on Nov. 19 at 1 p.m. in Hinkle Fieldhouse.