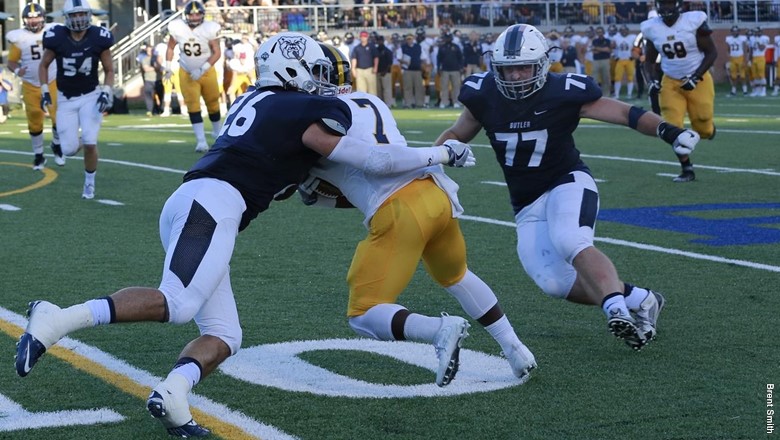 The Butler University football team won their second game in a row Saturday night, this time on the road at Taylor 27-14. The win puts the Bulldogs at 2-1 on the season and drops Taylor to 1-2.

Butler quarterback Malcolm Weaver continued his string of impressive performances, as he threw for 214 yards on 17 completed passes and ran for another 119 yards and a 70-yard touchdown that put Butler up 14-0 in the second quarter.

Taylor then scored 14 unanswered points of their own to tie the game, but that’s all they were able to muster as Butler’s defense shut down the Trojans the rest of the game.

The Bulldogs were able to connect on two field goals by freshman kicker Drew Bevelhimer to put the score at 20-14, and Duvante Lane finished off the scoring by running in a 15-yard touchdown to bring to the score to 27-14.

The Bulldogs were able to dominate on the ground, outrushing the Trojans 240 yards to 75 yards. Duvante Lane had 14 carries for 63 yards and two touchdowns. He has scored a touchdown on the ground in every game so far this season.

Receivers Nick Weaver and Pace Temple led the Bulldogs with five catches each, with Weaver taking his for 87 yards and Temple gaining 83 yards.

This week, the Bulldogs will open their Pioneer Football League conference schedule on the road at Campbell University on Sept. 24 to take on the Camels. The opening kickoff for that game is scheduled for 6 p.m.

Both teams will enter this game with a 2-1 record on the young season. Campbell is coming off their first loss of the season against Presbyterian, 31-14.

However, as strong as both teams are offensively in one category, they are just as strong defensively in the other. Campbell leads the Pioneer League in pass defense per game, letting up only 125.7 yards through the air per game. Butler, on the other hand, has been able to stop the run so far this season, giving up only 84.7 yards per game rushing.

Butler historically has had success against the Camels. In eight games against Campbell, Butler is 5-3, including a last-minute 25-24 victory last season at the Butler Bowl.