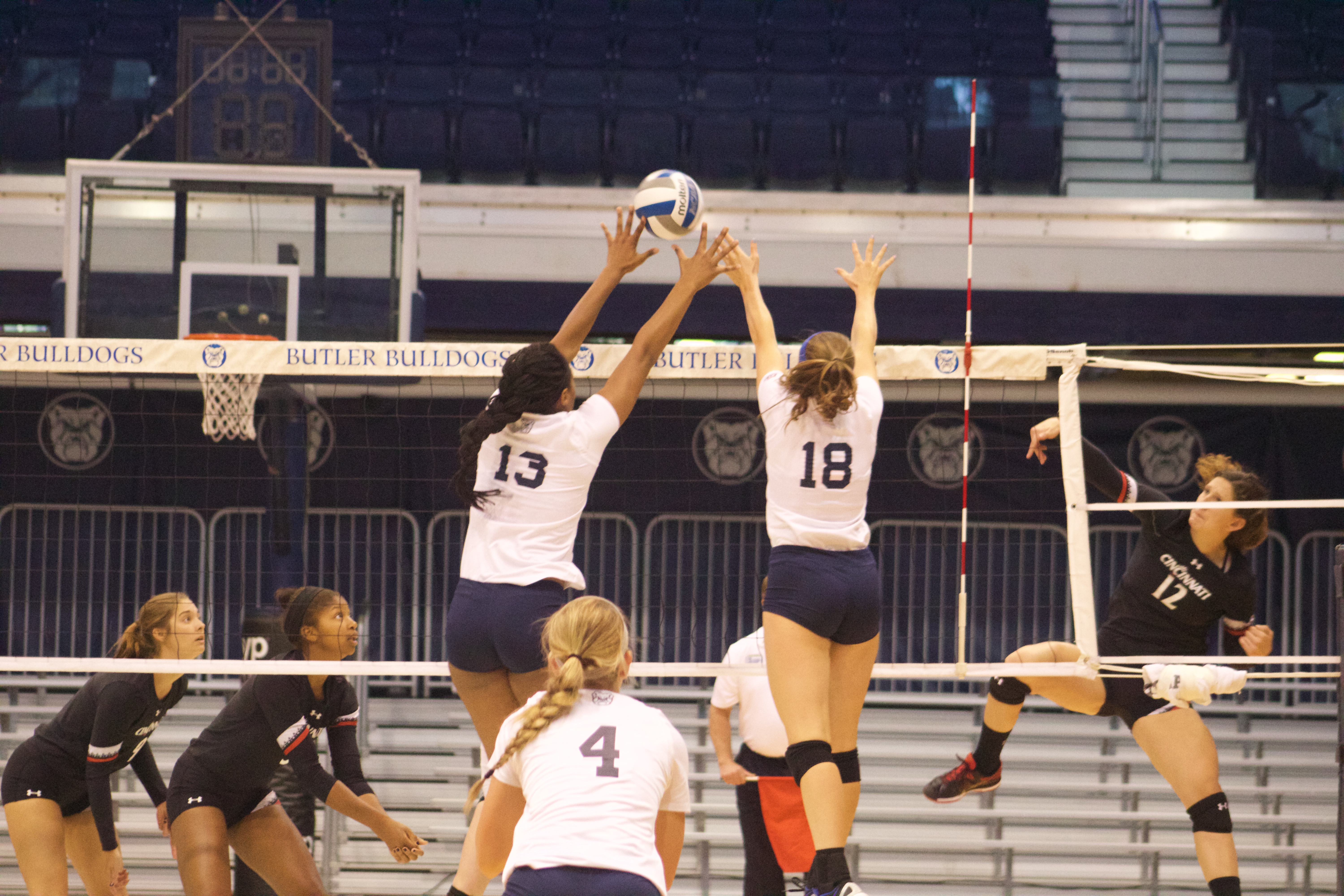 (From left) Sophomore Briana Lilly and former volleyball player Mary Striedl go up for a block. Photo by Jimmy Lafakis.

The Butler volleyball team will sport new faces in new places this year.

The Bulldogs will attempt to rebound after last year’s 12-19 (8-10 Big East) campaign. The team is at 4-4 on the season after splitting four matches at the Iowa Classic.

Four true first-years and two transfers were added this year. Redshirt freshman Maddie Freiwald and Rillian Dennis, who did not see playing time last year, round out the new group.

Sophomore Anna Logan was the only Bulldog named to the Preseason All-Big East Team.

“I’m really just using the preseason honor as motivation to live up to it,” Logan said. “As an outside hitter, I have multiple jobs: to terminate balls, get kills and always be consistent.”

Head coach Sharon Clark said she is pleased with how the newcomers have played together. Clark said she expects the freshmen and transfers, particularly sophomore libero Taylor Takeda, to make a big impact.

“We have the perfect blend of new players and returners,” she said. “They have gelled well and are a hard-working team.”

There are no seniors on Butler’s roster. So, leadership will have to come from other areas.

“I am planning to lead this team with not just my voice, but with my actions,” she said. “I want my teammates to be able to look to me in rough times and know that I have confidence in them and they can follow me.”

“The start of the season has shown us what we are capable of, and that is really exciting,” she said. “We also have a lot of dynamic players and depth on the team, which shows in every match we have played.”

That depth is critical for a team that finished seventh in the Big East last season. Klingensmith cited sophomore Makaila Jarema’s three blocks off the bench in the Idaho State win as an example.

“Everyone who comes off the bench is incredibly talented,” Klingensmith said. “They have contributed immensely when the team has gotten into a rough spot.”

Clark said she is focused on taking the season one week at a time.

“We want to get better each week and play to our potential,” she said. “We are stressing to be strong at the core of our team. We are working on being selfless, and we want to always put the team first.”

The Bulldogs will return to Hinkle Fieldhouse for the Butler Classic on Friday. They will host the Tennessee State Tigers, the Murray State Racers and the Wright State Raiders over the weekend.

“I am really excited to get this year started and improve our play week after week,” Ferguson said. “This can be an incredible year for us.”