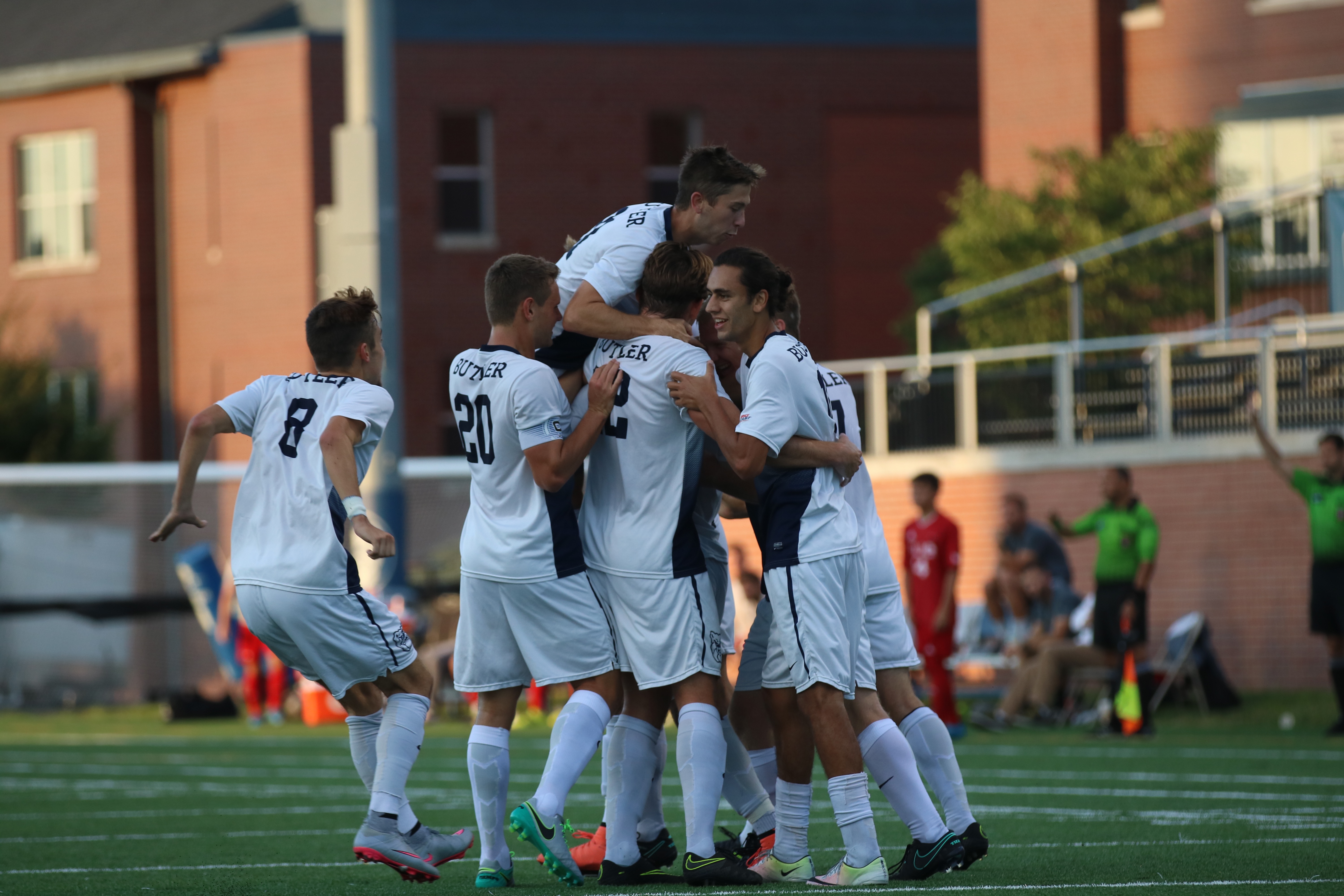 The team celebrates a goal scored during the game against Southern Illinois University – Edwardsville. Photo by Jimmy Lafakis.

Wins over the UC Santa Barbara and Oregon State propelled the Butler University men’s soccer team to 10th in the latest national poll.

Having started the season unranked, the team made its first appearance in the top 25 last week, ranked 19th.

Senior forward David Goldsmith scored four times and assisted on another goal in the two games. He was named the NSCAA, College Soccer News and TopDrawerSoccer National Player of the Week for his performance.

“It’s obviously good to get those recognitions and stuff,” Goldsmith said. “But at the end of the day, I’m more focused on winning games and succeeding as part of a team.”

It was a collective effort, with six different players scoring in the seven games. A key factor in the impressive start is excellent team chemistry.

“There’s a lot of talent, speed, athleticism and skill out there, but we’d be nothing if we weren’t coming together as an organized unit,” head coach Paul Snape said. “You’ve got to win every single moment out there, and the boys are doing a good job.”

Despite their early season success, the Bulldogs understand there is still plenty of work ahead if they want to achieve their goals. The coaching staff stressed to the team that while the accolades are nice, the focus remains on getting better every day and winning games.

“We as a program are under no illusion that we’re fantastic just yet,” Snape said. “We’ve got a lot to improve on. We’ve got a lot of older guys so they understand that if you’re ranked, it’s temporary. At the end of the day, it’s our record as opposed to the rankings that really matters.”

The team defeated Villanova University 3-2 in overtime in their Big East conference opener last Saturday behind two goals from Goldsmith, including the overtime game-winner. The other goal was scored by redshirt sophomore midfielder Marco Charalambous on an assist from Goldsmith.

Despite being picked to finish fifth in the conference, Butler is the only Big East team without a loss so far this season and is looking forward to the challenge of Big East play.

“One of our goals this year is to win the Big East, so yeah, everyone’s really excited,” Goldsmith said.

The team defeated the University of Evansville on Tuesday night with a score of 3-1. Goldsmith notched another goal on the season along with two other goals by Suddick and freshman Issac Galliford.

Goldsmith and the rest of the men’s soccer squad will return home to play Providence University on Saturday at the Butler Bowl. Kickoff is scheduled for 7 p.m.