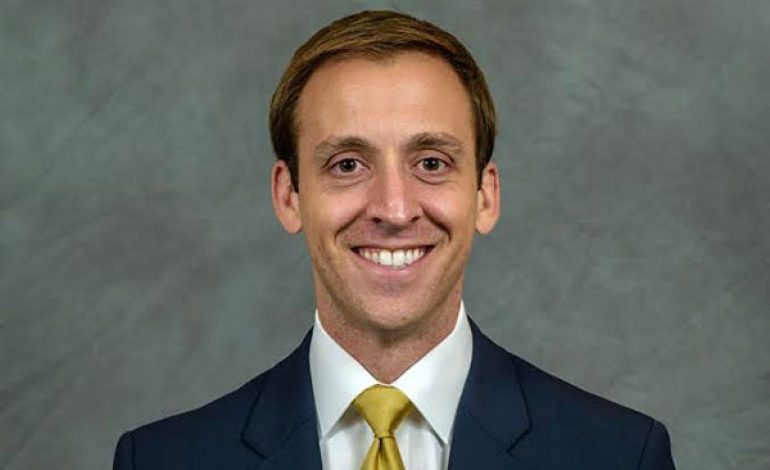 The game itself hit stores on Aug. 23, but on June 8, EA Sports made the official announcement they were parting ways with the duo of Jim Nantz and Phil Simms for fresh faces Gaudin and Fox Sports NFL analyst Charles Davis.

Gaudin said the initial offer took place a year and a half ago when he was on his computer and noticed a LinkedIn message from the director of talent at EA Sports, the company that owns the Madden games.

“I thought I was being Punk’d,” Gaudin said. “I didn’t know why EA Sports would be reaching out to me, and I thought that it was strange that the director of talent would reach out to me via LinkedIn as opposed to trying to get to me another way.”

Gaudin replied stating he was open to an opportunity, but he had to sign a nondisclosure agreement before learning exactly what the offer was. After the specifics were revealed, he traveled to EA Sports studios in Orlando for an audition, and a few months passed before he received a phone call informing him he landed the job.

“That certainly was a moment that’s hard to put into words and one that I’m incredibly grateful for,” Gaudin said.

He not only attended Butler but also served as the Butler men’s basketball radio play-by-play announcer from 2010 to 2013. During this time, Gaudin gained valuable national exposure due to the Bulldogs reaching two Final Fours.

In fact, Gaudin said EA Sports showed interest in him because one of the producers of the video game remembered Gaudin’s call of Roosevelt Jones’s buzzer beater against Gonzaga.

Mike Freeman, associate athletic director, helped with the process of hiring Gaudin and noticed things about him back then signaling a bright future for him.

“We realized just how detail-oriented he was and how much work he put into his craft,” Freeman said. “He just has a knack for letting an incredible play happen in front of him and then telling it with great detail but not something that’s over the top.”

Freeman said Gaudin attended many practices and film sessions and built a good relationship with the players and coaches in order to become an expert on Butler basketball.

“I think one of the big things for Brandon is that he’s able to uniquely describe different situations that recur often and that’s the mark of a really good play-by-play guy,” Minner said.

On the less technical side, both Freeman and Minner said Gaudin was a pleasure to work with and carried himself as a true professional. Minner said how meaningful it was to have Gaudin take the time to teach him valuable lessons in the art of broadcasting and recalled one of his favorite parts about Gaudin.

“The best part about Brandon was how animated he’d get,” Minner said. “When the pressure is on, he’s sweating, he’s getting into the game, but then he delivers every time.”

Gaudin is delivering in a different way than he has in the past when it comes to his role with Madden. Since he is announcing for a video game, it involves a strong dose of voice acting as opposed to live commentary. Gaudin welcomed this challenge, because he said voice acting appeals to him, and he found a routine to get himself in character.

“You go into the studio cold on a Monday at 10 a.m. and you get handed the script and all of a sudden you are calling touchdown catches to win the Super Bowl,” Gaudin said. “I try to, for a moment before I get going, close my eyes and act like I am at the NFL stadium getting ready to call this game.”

While his new role with Madden has kept him busy, he works in announcing positions for Big Ten Network and Westwood One, one of America’s largest radio networks. His weekly schedule is set and crowded at this point.

Gaudin said he takes the 6 a.m. flight from Atlanta to Orlando each Monday morning and is in the EA Sports studio to record live content updates for Madden NFL 17 to keep the game as updated as possible. Tuesday is devoted to adding miscellaneous phrases to the game’s commentary vault.

After taking a Tuesday evening flight from Orlando back to Atlanta, Wednesday and Thursday allow Gaudin to prepare for the Big Ten Network game he is scheduled to call.

On Friday morning, Gaudin flies to the site of the game—this week it happens to be Madison, Wis.—and attends production meetings as well as talking to the head coaches of both teams during the day.

Gaudin does the actual play-by-play call of the game on Saturday and flies back to Atlanta on Sunday morning and starts the whole process over again.

While Gaudin acknowledged his active schedule, he recalled a frequent saying of his.

“It is a little busy, but what I often say is, it beats working for a living,” Gaudin said. “I feel incredibly blessed to be in an industry that I like to be in. When I wake up in the morning, I don’t dread putting in the hours.”