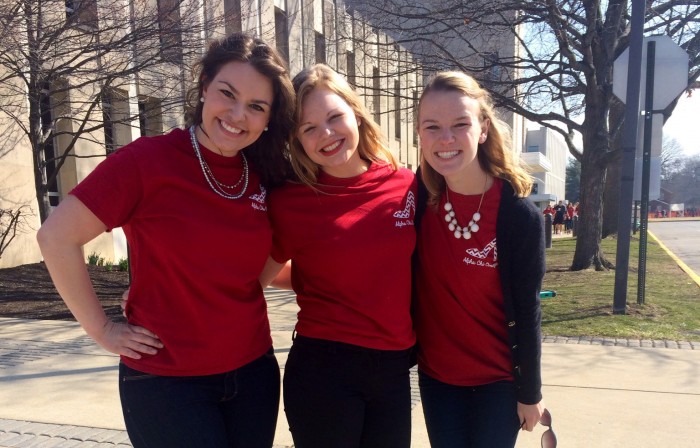 The Julian Center, Indiana’s oldest and largest center for domestic violence relief, is dedicated to serving the women and children who suffer from this abuse.

During more than a span of 40 years, the Julian Center has served more than 200,000 individuals.

Hundreds of men and women gathered to walk exactly one mile in bright red high heels, which were meant to symbolize the oppression of domestic violence victims.

The morning sun shone off the shoes as each new pair was taken out of its box.

Josh Murdock, a freshman, said he was “walking to raise awareness about the atrocities of domestic violence.”

Each walker donated $3 to participate in the walk, which Alpha Chi Omega then donated to the Julian Center.

“We are all here to promote awareness of domestic violence and to put it into perspective for men,” said Marisa Heiling, a sister of Alpha Chi Omega.

Many men stumbled about on the grass, unbalanced and wobbly, as they had no practice walking in heels.

“I’m terrified,” said junior Drew Horn. “I don’t know how I’m going to go a whole mile in these.”

Before the walk started, Alex de Aguiar Reuter spoke to the participants.

Reuter is the manager of corporate engagement at the Julian Center.

He promoted proactivity, the spread of awareness and not letting domestic violence cases go unreported.

The women of Alpha Chi Omega brought a great amount of support to a worthy cause, and spread awareness of a prominent issue in our community and society.