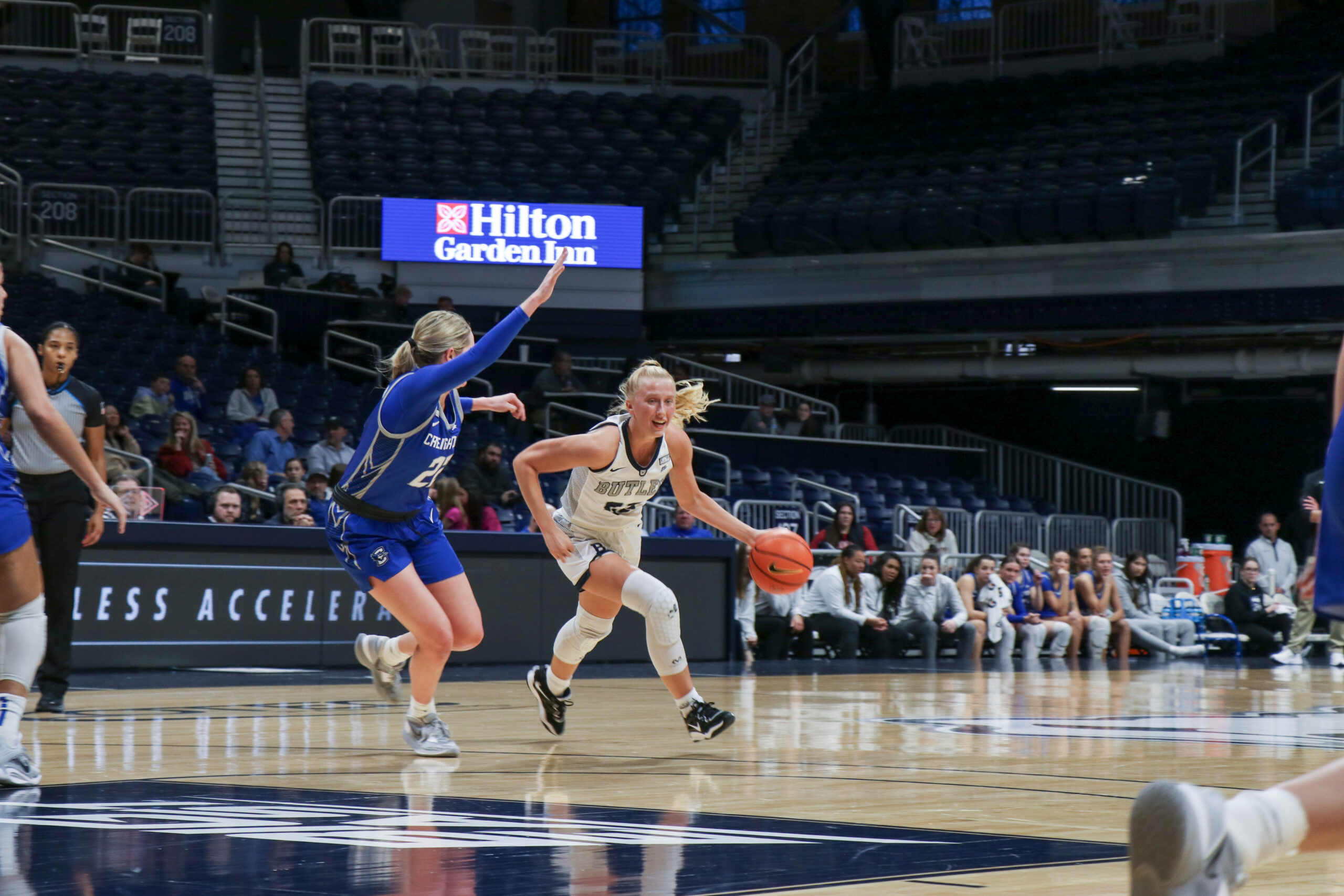 First-year Jordan Meulemans drives to the basket against Creighton on Jan. 14. Photo by Grace Hensley.

The Bulldogs will travel east to face the No. 5 Connecticut Huskies in their last regular season meeting this season. Butler heads into the game coming off a 74-66 loss against Providence while UConn is coming off a lopsided 103-58 victory against Seton Hall. The two teams met earlier this month on Jan. 3 at Hinkle with UConn taking a decisive 80-47 victory. From tip-off to the final buzzer, UConn led the entirety of the game cementing their position as Big East favorites.

Here’s what you need to know before a battle between the Huskies and the Bulldogs.

Who: Butler vs. Connecticut

How to watch/listen: SNY

If the Bulldogs want to stay competitive in Saturday’s matchup, they are going to have to defend the paint — especially Aaliyah Edwards. In their first meeting, the star junior forward led all scorers with 20 points — 18 of them coming in the paint. The rest of the Huskies combined for 34 amassing a total of 52 points in the paint — 65% of their total points in the contest. The Bulldogs were without junior Anna Mortag the first time around who can make an impact on defending the Huskies down low.

On the flip side, the Bulldogs will have to use the paint to their advantage as UConn can go on long, early runs that could put Butler away early on. While defending the paint, the Dawgs will need to play their best defense against one of the top offensive-scoring teams to give themselves a shot at an upset.

The Huskies will be shorthanded this time around against the Dawgs. The Huskies lost their 2021 AP Player of the Year Paige Bueckers for the season due to an ACL injury; sophomore guard Azzi Fudd will be out after re-injuring her knee in a game on Jan. 15 against Georgetown; and freshman standout Ice Brady is out for the season after suffering a dislocated patella in her right knee. During their game on Jan. 17, only seven Huskies were in uniform due to injuries and Butler should expect them to be short-handed once again. However, head coach Geno Auriemma‘s squad is deep all along the bench and can make up for the Huskies’ losses.

With only several players hitting the court, the Huskies’ options are limited and will force them to mainly go to Edwards, graduate student Dorka Juhász and redshirt junior Aubrey Griffin for offense. All three scored 20+ points against Seton Hall.