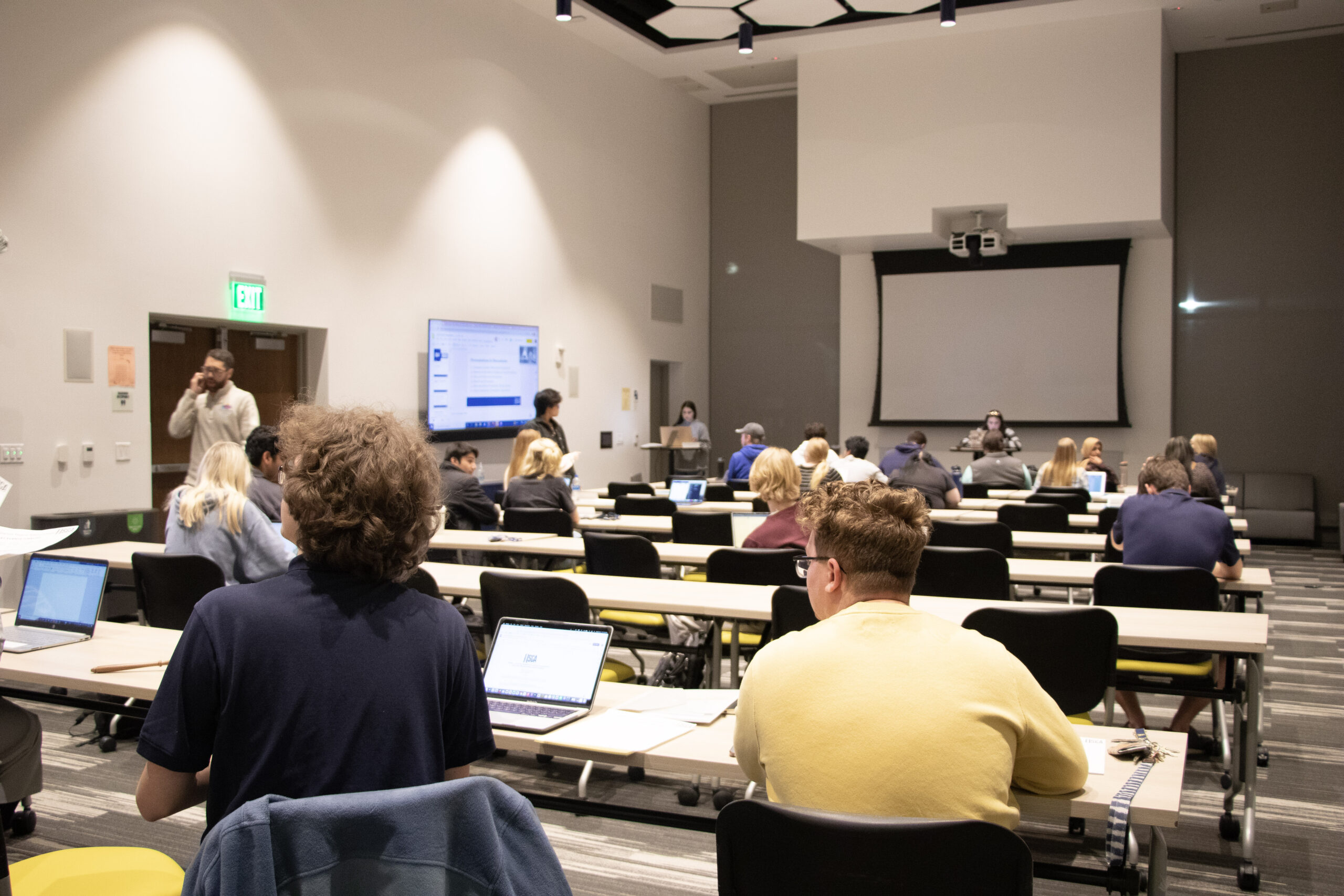 With the end of the semester around the corner, the Student Government Association, SGA, is nearing the conclusion of a semester of projects. The executive, legislative and judicial branches have worked hard to ensure that the vision of President Cade Chezem and Vice President Meet Patel is realized.

Alongside the president and vice president, the executive branch of SGA also includes the executive cabinet. According to SGA’s website, the executive branch is “advised by the Executive Cabinet Advisory Board which consists of representatives from various campus entities.” These include diversity, equity and student belonging, public relations, policy and procedure, student engagement, and mental health and well-being.

The board of student engagement, led by senior health sciences major Tomi Clark, is a new addition to SGA as of this year.

“Really, it’s just to ensure that students feel connected [and] involved in campus life,” Clark said. “[We are] trying to do this through fostering a dynamic, inclusive and just overall vibrant campus community where students feel their voices are really heard.”

To allow students to do this, one of the board’s goals is to increase the opportunity for students to voice their questions, ideas and general feedback.

“When I was designing the mission of the board … [it] was to ensure that students have an ample opportunity to voice their feedback if they so choose,” Clark said.

The board also has an anonymous feedback form, ensuring that students always have an opportunity to give that feedback if they wish.

For the upcoming semester, the board aims to increase SGA’s presence and opportunities for students to talk to SGA.

The student engagement board created a collective social calendar of events happening on campus that includes, but is not limited to, BCRs, athletics, fitness classes in the HRC, philanthropy events and student-led organization events that are open to all students.

Clark said the board aims to increase transparency — making sure students know the complete purpose, role and responsibilities of SGA.

Within SGA, the legislative branch is in charge of writing legislations, writing resolutions, as well as handling student organizations in conjunction with the Office of Student Involvement and Leadership.

One primary goal of the legislative branch this past semester was working through the grant process.

Markland said that there are a lot of moving parts and students who need to be served in that capacity on campus.

Markland is in the process of appointing people to both the food advisory committee and sustainability committee — unlike the five legislative committees operated by senators, those who sit on these committees are able to do so without being an elected SGA representative, giving more students the opportunity to be involved in the student government process.

One of the largest accomplishments of the legislative branch was allocating $37,000 to Dawg Ride in order to buy a new van.

“We were able to hit the ground running, in conjunction with the executive branch, and passed a resolution that helped fund Dawg Ride,” Markland said. “We were able to buy a new van, which is a lot nicer, a lot more reliable and has a lot more ADA accessibility options.”

Markland emphasized that she wants to be an accessible resource to students. All Senate meetings — the dates of which are listed on the SGA website — are completely open to the student body.

“At the beginning of every meeting, if a student has a concern, they are welcome to come speak for up to a minute,” Markland said. “We also have a form on our website that students can fill out, and I will read the first 250 words at the beginning of any Senate meeting.”

SGA’s judicial branch is led by Chief Justice Ryan Crnarich, a senior political science and history double major. Under Crnarich, there are six associate justices. In addition to the six justices, there is also a court clerk who serves as the secretary.

The judicial branch’s responsibilities relate to the constitution and governing documents. Crnarich said that the branch is in charge of elections, conduct within SGA and judicial review.

Additionally, the judicial branch oversees elections during both the fall and spring elections. A goal of the branch for this past fall election was making sure the election process ran smoothly.

“The fall was always a trial run because the spring is a bit bigger with presidential elections,” Crnarich said. “We want to make sure we kind of got the election process down, and right now we’re going through the process of reviewing our election guidelines and making changes to those where we see fit.”

This past week, Senator Simpson was impeached. The judicial branch received two petitions in regards to the senator’s attendance through an anonymous complaint form that goes straight to the judicial branch with no names attached.

“The court reviewed those and had a hearing,” Crnarich said. “There was no-showing to the hearing, after calling to give several dates and several flexible times, so we moved to introduce articles of impeachment.”

The branch used eight articles of impeachment, the first seven dealing with attendance, and the last dealing with her failure to comply with the hearing. Crnarich said Senator Simpson had missed several meetings — almost every meeting of the year. The court found evidence on those counts and voted for either acquittal or conviction. All but one article passed unanimously — convicting her.

After the impeachment process, Crnarich and the rest of the branch are ensuring that the process went smoothly and to make sure there was a strong precedent, as this was the first impeachment in recent memory.

Similarly to the legislative branch, Crnarich and the judicial branch want to be accessible to students. He said that while SGA can seem intimidating, students should reach out if they would like to see changes on campus.

Students can submit concerns, apply for Senate grants and submit feedback on legislation on butlersga.org.