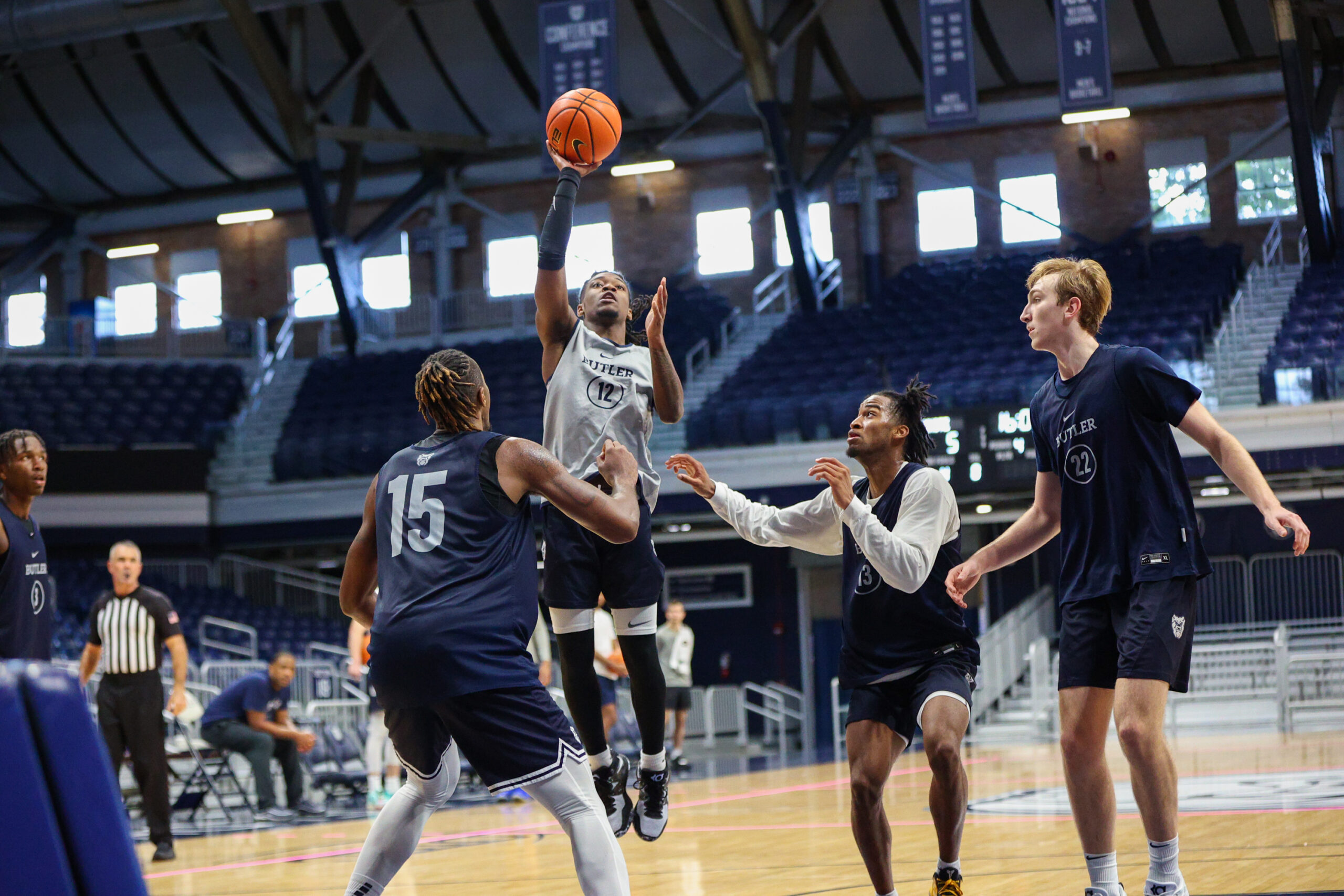 Junior guard Myles Tate goes up to the basket during the blue-white scrimmage on Oct. 8. Photo by Claire Runkel.

1. The Bulldogs get their first AP Top 25 ranking in three years by losing just two games before the new year.

Thad Matta and March Madness bids go hand in hand. While it may be too early to ask the Dawgs to get to “The Big Dance,” they certainly have a chance of getting ranked at some point during the season. A win over Penn State in the Gavitt Games early on, along with an opening round upset against Tennessee in the Battle 4 Atlantis could give the Dawgs national attention. This burst of momentum would surely propel them to a top 25 ranking if they had just a loss or two in 2022. Must win games include at California on Dec. 10 and at home versus Providence on Dec. 29. If the Dawgs live up to the lofty expectations and hopes of the Hinkle faithful, there is no telling what AP ranking they could have heading into the Big East Tournament.

A second homecoming for Thad Matta could mean a second conference coach of the year award in his first season with the Bulldogs. In 2000, Matta took the Dawgs “dancing” after a record 24-win season and brought home the Midwestern Collegiate Conference coach of the year award. Moreover, the success brought the Dawgs to a second round March Madness appearance before losing to tournament runner-up Arizona. A handful of towering transfers and relentless returners gives Matta every sign to aim high and shoot higher this season. Size, shooting and shutdown defending will make this team a true test for each opponent in Hinkle.

Friday, Jan. 13, 2023 might be the perfect time for the Dawgs to re-announce themselves as Big East big hitters. The Wildcats will be traveling to Indy and entering a guaranteed sellout crowd that will want nothing more than to see David slay Goliath. While the Dawgs may or may not have the record to back it up, Nova has stumbled in Hinkle four times since 2016. Since 2013, Butler beat Nova on the road just one time, but if the Dawgs are playing to the tune of Thad’s drum, the Wildcats are going to be entering a definitively difficult matchup both on the court and in the crowd. Big East faithfuls always enjoy a Nova knockdown, and Butler may just be able to catch lightning in a bottle should they win in January.

4. The Dawgs take both the home and away victories against Xavier.

Butler and Xavier downright hate each other and the ability to chant a certain line to the tune of Kernkraft 400 by Zombie Nation after both games this season would epitomize a season to remember for the Bulldogs. Butler snuck past Xavier in a sensational overtime victory in last year’s Big East tournament. However, the Dawgs could not get it right in either regular season game last season, so the Bulldogs will desperately want to get the leg up in a rivalry that has seen Xavier claim eight of the 15 meetings since 2017.

5. The Dawgs drop just one game at home all season.

Whatever the case may be, Butler has not won a game against UConn since joining the Big East. The two have only squared off five times, but Butler cannot seem to get it right against the Huskies. Losing all five of the matchups by at least 12 points, the Bulldogs will unfortunately drop one at some point this season, and UConn is likely to be that team. However, after an upset over ranked Marquette and a one point loss to a top ten Providence team last season, the Dawgs’ ability to perform well against highly ranked teams should lead to a number of Big East home victories this year. If this article holds true, it would mean the Dawgs take down a ranked Nova squad, a good Xavier team and a well-coached Providence unit. While this may seem unlikely, Thad Matta’s first seasons usually signal a change in culture and a return to winning ways.