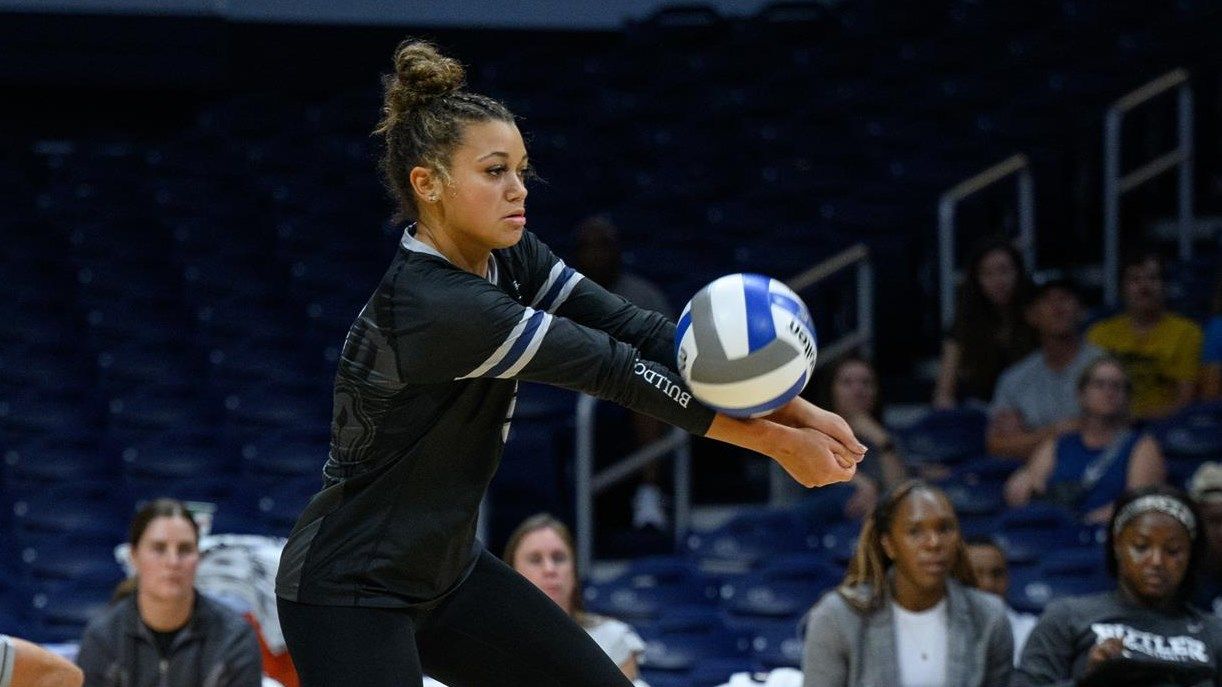 This past weekend, the Butler volleyball team finished their four-game road trip against Creighton and Xavier.

On Friday, Sept. 20, the Bulldogs headed to Omaha, Neb. to take on the No. 21 Creighton Bluejays. The two teams forced an early 9-9 tie before Creighton would go on a 11-3 run giving them a comfortable lead at 20-12. Two kills from Creighton’s Ava Martin would help lead the Bluejays a 25-15 victory against the Bulldogs. In the opening set, Butler sophomore Mariah Grunze was the go-to with 15 attempts recording four kills.

Unfortunately, the second set did not go the Bulldog’s way as Creighton pulled themself to an early 10-2 lead. From there, Butler could not recover from Creighton’s offensive combination of Jazz Schmidt, Martin and preseason player of the year, Norah Sis. Those three players combined for 10 of Creightons 14 kills compared to Butler’s 12 total. Junior Amina Shackelford led the Bulldog’s offense with six kills. The Bluejays took the set 25-16 resulting in a 2-0 set lead.

During the third set, Butler continued to fight with a three point deficit at 9-12. Creighton rattled off eight points compared to Butler’s three to take a 20-12 lead. Similarly to how the first set went, Martin led the Bluejays – this time – to a match victory totaling four kills in a 25-17 set victory. Grunze hit four of Butler’s nine kills. Creighton took the only game between the two 15-25, 16-25 and 17-25.

At the conclusion of the Creighton game, Butler traveled to Cincinnati, Ohio to take on the Xavier Musketeers on Sunday, Oct. 2 in a five-set thriller.

Although both Xavier and Butler started the match strong with a one point Xavier deficit at 8-7, the Bulldogs never looked back in the opening set. Outside of Xavier’s six service errors, Butler’s 11 kills helped contribute to a 25-21 set victory. Shackelford led the offense with four kills.

The second set followed a similar pattern of back and forth play. Throughout the set, there were 12 ties and four lead changes with the last one occurring at 24-24.  After falling behind 20-23, the Bulldogs stormed back with four straight points to take the lead 24-23 before capping the set off with a Xavier error. With the 26-24 victory, the Bulldogs had an early 2-0 set lead. Shackelford, senior Megan Sheridan and senior Marisa Guisti all posted four kills apiece in the Butler win.

The Bulldogs tried to close out the match on a 3-0 sweep, but fell just short in the third set. The teams were tied late 19-19 before Xavier went on a 6-2 run to take the set 25-21 with three straight Musketeer kills. Shackelford had six kills, which wasn’t enough to top Xavier’s .224 hitting percentage.

Despite the shortcoming of a sweep, Butler had another shot to secure the win in the fourth set. The Bulldogs had an 18-15 lead in the set with three straight points after a 15-15 tie. Unfortunately, three kills from Xavier’s MaryAnn O’Toole helped carry the Musketeers to a late 23-18 advantage. Butler could not overcome Xavier’s 8-0 run and fell short of a late-set comeback losing 19-25 resulting in an adrenaline-high finish.

The fifth and final set was – once again – more back and forth play between the Big East rivals. The two teams forced a 7-7 tie off of kills and opposing team errors. From the tie, Xavier went on a 6-1 run to take a commanding 13-8 lead in a set going to 15. The Bulldogs were able to rattle three off three points attempting a comeback, but not before Xavier’s Hunter Fry would put down a kill, finishing off the comeback 15-11.

Butler’s senior libero Jaymeson Kinley found herself just shy of the program’s record list for digs in a set at 42 which is also her new career-high.

The Bulldogs will look to get back in the win column in the early Big East schedule with four straight home games starting with Georgetown on Friday Oct. 7 at 6 p.m. in Hinkle Fieldhouse. The game will be streamed on FloSports.