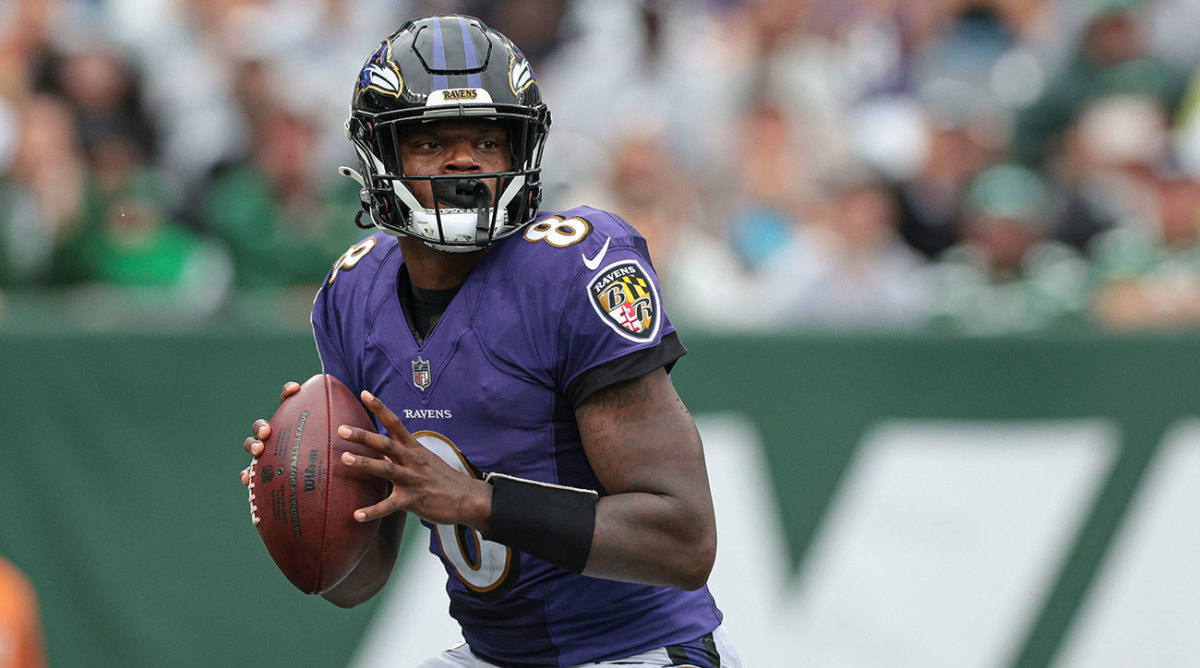 Lamar Jackson drops back to throw a pass during the Ravens week one win at the Jets. Photo courtesy of USA TODAY Sports/Vincent Carchietta.

Week one has already introduced kicking woes for a handful of teams. To make sure you don’t get kicked down in your league this week here is one player to start and to bench in each position this week.

Start: Lamar Jackson, Baltimore Ravens. After putting on a show last week against the Jets the former MVP will no doubt run all over Miami. Despite the Dolphins putting up 19.0 points in last week’s domination against New England, the Dolphins like many of the league’s defenses, will struggle to contain the league’s most elusive and run ready quarterback. Moreover, Jackson will be on the ground as his receivers are not exactly ideal for a J.K. Dobbins-less offense. Watch him pick up the slack once again this weekend as Miami will try to outscore this one man offense.

Sit: Tom Brady, Tampa Bay Buccaneers. Despite all the weapons around him, the Saints know how to contain not only Mike Evans but also Julio Jones. With Chris Godwin likely out for the matchup, Brady will either be handing the ball to Fournette much more or finding a new favorite target for this one. Either way, his performance will be reflected in the fantasy totals at the end of this weekend.

Start: Saquon Barkley, New York Giants. After hitting the ground running last week, we may have seen the return of the true Saquon. Carolina could not contain Nick Chubb and Kareem Hunt and there is no indication that they will magically be able to stop the more physical backfield from the Giants this weekend. Surely, this is the week Saquon begins to reimagine what he can do for an otherwise average offense.

Sit: Alvin Kamara, New Orleans. While the Bucs will have their hands full on offense, so will the Saints. The Buccaneers defense will swarm Kamara anytime he gets the ball this weekend. Jameis Winston is going to have to throw the ball long. If the Bucs dictate the flow of the New Orleans offense, Kamara will likely suffer in the fantasy points department.

Start: Tyreek Hill, Kansas City Chiefs. Undoubtedly primed for a big week once again, the Ravens will be scrambling trying to contain Hill, Waddle and Gesicki. Speed kills and the Dolphins number one will be reminding the Ravens of just how quickly he can turn on the afterburners. Assuming Tua remains confident and competent throughout the first half, Hill is a guarantee for at least 14 fantasy points this weekend on the low end.

Sit: Ceedee Lamb, Dallas Cowboys. No Dak Prescott, no Amari Cooper to take pressure off him, and no other receiver to help move the chains consistently. For Ceedee Lamb, this season has started off bad and now gone to worst. With Cooper Rush starting this week and no sight of a reliable second receiver, the coverage and the pressure will be on Ceedee again when they play the Bengals Sunday.

Start: Kyle Pitts, Atlanta Falcons. Not much went Pitts’ way last week and if he plays like the number one receiving option for Mariota, then he will get some decent points this week. While some may argue it’s going to be hard to get him the ball, he has the speed to burn linebackers and the size to out work corners and safeties. If the Falcons feed the former Florida Gator, Pitts will be a surefire gamechanger for many in fantasy week two.

Sit: Cole Kmet, Chicago Bears. Zero points last week left many wondering just what happened to the Bears tight end. Unfortunately, it will be unlikely that Kmet will see a major resurgence against a strong Packers defense in Lambeau this weekend. While Justin Fields has shown flashes of his former self, Kmet may not be a reliable starter, let alone bench player for the short and long term this weekend.

Start: Cade York, Cleveland Browns. Four-of-four last week including a 60-yard game winner, the Browns will only continue to rely on the rookie as that offense is not as prolific in the red zone without Deshuan Watson. Look for York to impress again this week and continue his 100 percent kicking.

Sit: Tyler Bass, Buffalo Bills. While the Bills have been scoring consistently already this season, Bass is not going to see many field goal attempts against a team that is known for their effective rush defense rather than passing defense. With Josh Allen more than likely ready to light up yet another opponent, Bass will be kicking several extra points rather than field goals this weekend.

Start: Cleveland Browns Defense. After a sensational start, the Browns did fall asleep in the second half against Carolina. However, the Jets have even less offensive talent than the Panthers and Myles Garrett will continue to terrorize the offensive line with Clowney close behind. If the Browns sort out the pass defense especially on deeper routes, they should have no issue scoring double digit fantasy points against the Jets.

Sit: Dallas Cowboys Defense at Cincinnati. Despite Micah Parsons shining for this team, they are going to be essentially helpless against an angry Joe Burrow who looks to bounce back after a terrible start to his season. They will have to guard Chase, Boyd and Higgins with Mixon in the backfield and will get a motivated version of Burrow. Dallas is going to have a long Sunday and without Dak Prescott to help move along the offense, the Cowboys are looking at a very bleak 0-2 start.