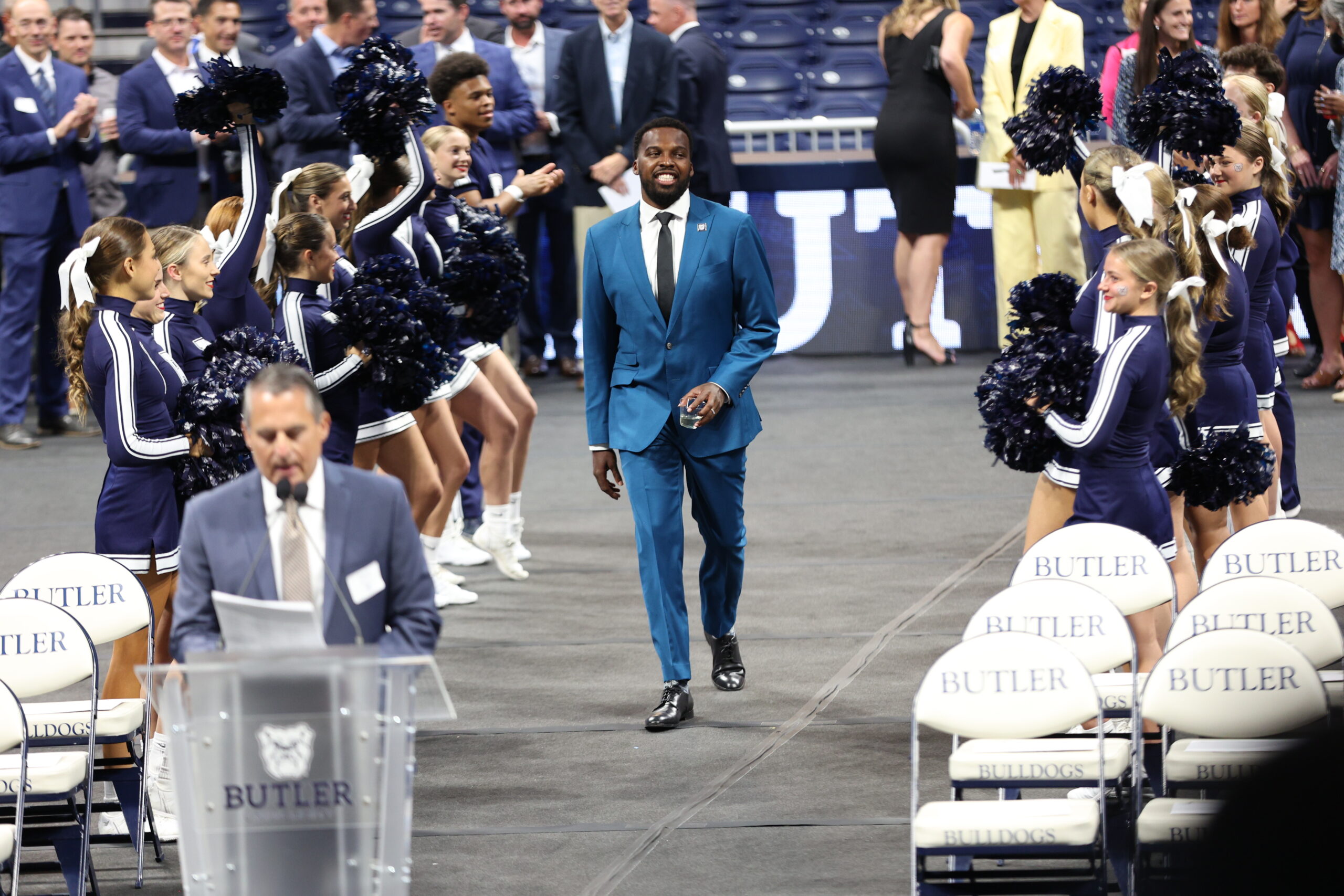 Shelvin Mack, a member of the Butler men’s basketball team from 2008-11, is introduced during the ceremony on Sept. 24. Photo by Claire Runkel.

Butler University welcomed the class of 2022 to the Butler Athletics Hall of Fame on Saturday, Sept. 24. Seven individuals and two teams were inducted into Bulldog royalty inside Hinkle Fieldhouse, including three members of the 2010 and 2011 men’s basketball teams that made back-to-back national championship games.

The ceremony — started by Butler and the Butler B-Association — is an annual event that began in 1992 and honors former athletes, coaches, administrators and other members who have made remarkable contributions to the university’s athletic program.

Howard was a member of the men’s basketball team from 2008-11. After graduating, he ranked third all-time at Butler in scoring with 1,939 points and third in rebounds with 884.

Howard received numerous accolades during his time at Butler, including being a three-time All-Horizon League first-team selection and being the first player in conference history to be named to the conference’s All-Tournament team in each of his four seasons.

He also became the first Butler student-athlete to earn Academic All-America honors for three consecutive seasons. His honors also include winning the NCAA Elite 88 Award in 2010 and 2011 which is given to the student-athlete with the highest cumulative GPA at the Final Four.

In his acceptance speech, Howard talked about what he learned from playing at Butler.

“I think my ultimate lesson that I learned from all of this is that dreaming matters,” Howard said. “Along with all those guys who came to play for us, every single person in that team picture made it possible for us. I truly appreciate all you guys for the great guidance but also the difficult moments, too, because that’s where you really helped me grow.”

Hayward was a member of the men’s basketball team from 2008-10. In his two seasons at Butler, he scored 992 points and grabbed 512 rebounds.

Hayward was on the All-Horizon League first-team in both of his years and won the 2010 Horizon League Player of the Year award. He also won Most Outstanding Player at the NCAA West Regional in 2010, as he helped lead the Bulldogs to the first Final Four in program history.

Following the 2010 season, Hayward was selected with the ninth overall pick in the 2010 NBA draft by the Utah Jazz. He will be entering his 13th season in the NBA as a member of the Charlotte Hornets, having scored 11,454 career points and averaging 15.6 points a game.

Due to the NBA season starting soon, Hayward was unable to be in attendance for the ceremony. He sent in a video expressing his gratitude for his induction.

“First and foremost, thanks to my teammates,” Hayward said. “They are the reason that I am being inducted into the Hall of Fame. We had some special runs there and some special bonds that I will never forget.”

Hayward also made sure to mention the impact of his parents on his career.

“My dad and mom shot with me in the backyard every single day,” Hayward said.  “Doing the Steve Alford workout and going with my dad on Sundays certainly built the foundation for the basketball player that I became. I like to say that my dad taught me everything I know with the game of basketball.”

Along with Howard and Hayward, Mack was a crucial part of the Bulldog men’s basketball teams that made back-to-back appearances in the national championship game in 2010 and 2011. He was named the Most Outstanding Player at the NCAA Southeast Regional as well as the All-Tournament team in 2011.

In three seasons, Mack logged 1,527 career points. His 357 assists and 216 three-pointers are still among Butler’s Top 10 list. Throughout his career, Mack earned All-Horizon League honors twice and was named to the 2011 Horizon League All-Tournament Team.

Post-Butler, Mack was taken by the Washington Wizards in the second round of the 2011 NBA Draft, which began an eight-year NBA career. Mack also played professional basketball overseas in Italy, Israel and Greece.

Prior to the ceremony, Mack spoke about the relationship he has with his teammates even to this day.

“Growing up, I never had brothers,” Mack said. “Coming to Butler, my team [became] my brothers, and we still talk to this day. It means a lot to see all the hard work pay off over time.”

Andrew Baker was a three-time Horizon League Cross Country Athlete of the Year — 2007 to 2009 — and also starred for the track and field team. At the 2008 Horizon League Indoor Track and Field Championships, Baker won the mile, 3k and 5k —  he also helped lead the Bulldogs to a distance medley relay title.

During his career, Baker posted a pair of Top-40 finishes at the NCAA Cross Country Championships. He also earned Academic All-American honors twice.

In his induction speech, Baker thanked some of his teammates and coaches for their role in his success at Butler.

“My time at Butler was some of the best times of my life,” Baker said. “My coaches and some of the guys I mentioned were big reasons for that.”

Howard was a running back on the football team from 1979-82. He led the team in rushing yards in each of his four seasons.

After he graduated, he ranked second on Butler’s career list with 2,691 rushing yards. He received Heartland Collegiate Conference all-conference recognition three of his four seasons and was named Butler’s offensive player of the year two times.

Howard summed up how special his time at Butler was in his speech.

“My time playing football at Butler was certainly one of the most memorable and formative of my years,” Howard said. “I will be forever grateful for the opportunity and the time that I had with my teammates and coaches. I would like to thank Bill Sylvester Sr, Bill Lynch and several others. They have my utmost gratitude.”

Borgerhoff was a four-time Butler Most Valuable Swimmer and All-Midwestern Collegiate Conference honoree in men’s swimming. He won the conference championship in 100 breaststroke and 200 breaststroke four times as well.

“[Ian] is very appreciative and really appreciates the support from Butler and its community,” Cecilia said.

The 1998 baseball team won a then-program record 33 games, winning the regular season and conference tournament for the Midwestern Collegiate Conference. They went on to advance to the NCAA Tournament.

Tony Hamilton spoke on behalf of the team and emphasized how the team operated as a unit.

“Every player on our roster made individual contributions to a victory that season,” Hamilton said. “It took more than 30 of us holding each other accountable on a daily basis to accomplish what we did. This team won the program a second regular season conference championship in three years as well as its first ever conference tournament title.”

The 1995-96 women’s basketball team was the first team to make the NCAA tournament appearance in program history. The Bulldogs won the Midwestern Collegiate Conference Tournament that season with an upset of top-seeded Green Bay.

The team finished the season with a 21-9 record, including a 13-3 record in conference play. Nikki Stevenson was the player chosen to speak on behalf of the team. She thanked the coaches from the 1995-96 team for their work beyond the game of basketball.

“These coaches behind us … they also turned us into really good human beings,” Stevenson said. “They turned us into productive students. They helped us be loyal to one another, no matter if we were successful or failed.”

Olkowski was the head coach of the women’s basketball team from 1993-99, accumulating a 114-56 overall record and 66-22 record in conference play.

The three-time Midwestern Collegiate Conference Coach of the Year had three 20-win seasons. Some of her highlights in her six seasons with the Bulldogs include leading the 1995-96 team to the NCAA tournament and winning the regular season title in 1998.

Olkowski got emotional during the ceremony when she explained how she felt seeing her players for the first time in years.

“If I had the slightest influence on the people that they are today, it is more rewarding than anything I have ever done,” Olkowski said.