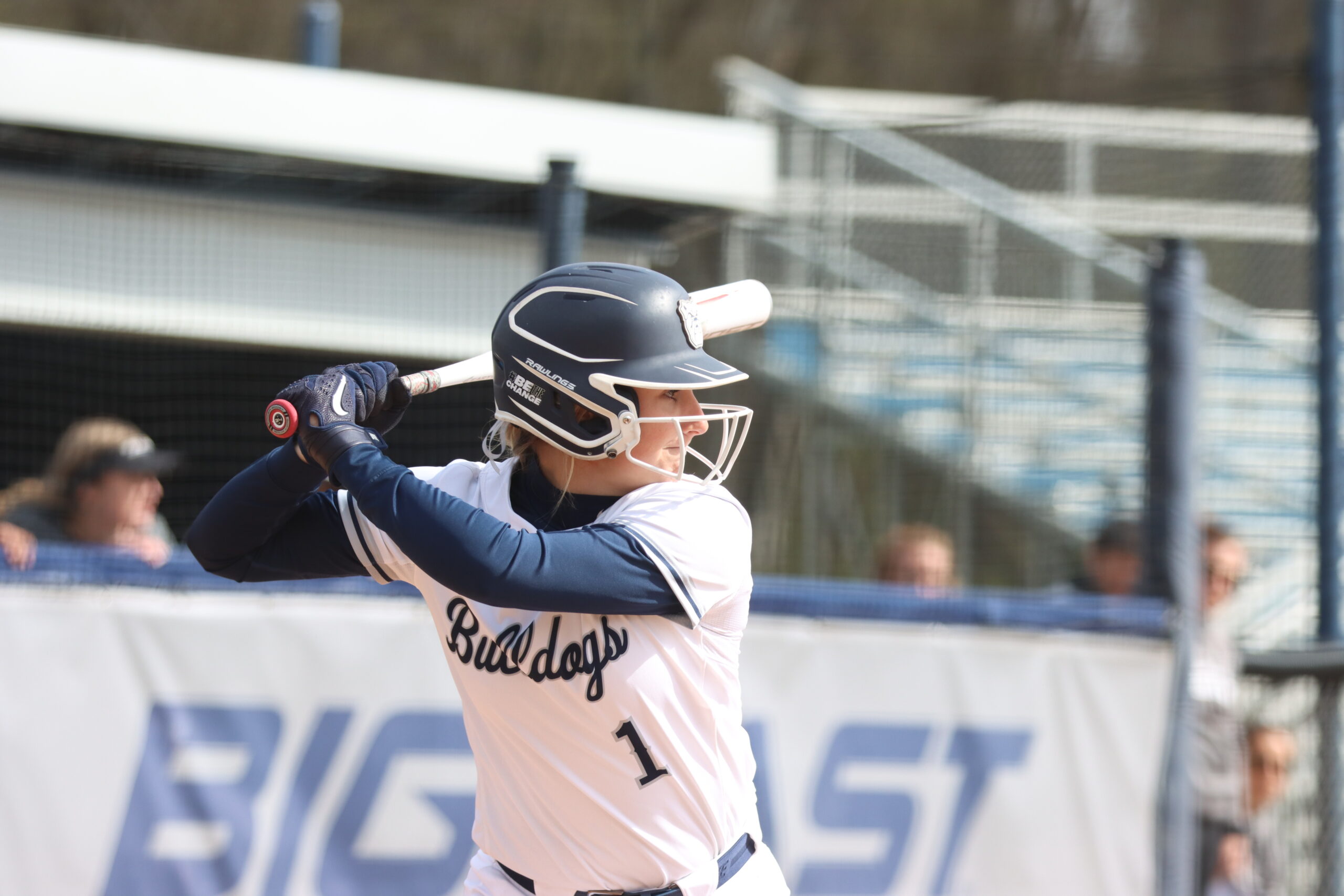 Freshman Ella White stands ready to swing at a pitch during the 2021-22 season. Photo by Francie Wilson.

‘Welcome to the Team’ is a Q&A series where the Collegian sits down with first-year student-athletes who are entering their first season at Butler University. These articles will address why they chose Butler, what they hope to get out of their first season, and some personal tidbits that you won’t find anywhere else.

This week, sports editor Kobe Mosley sat down with three first-years who are playing for Butler’s softball team. All three of the first years — Ella White, Ellie Boyer and Sydney Carter — are infielders.

Ella White is a 5-foot-9 infielder from Noblesville, Indiana. She majors in human movement and health science education. Photo courtesy of Butler Athletics.

Kobe Mosley: When did you start playing softball?

KM: What is it like playing close to home?

EW: “I love it. I’ve had lots of people that go to my [high] school that look out for me [and are] able to come to my games. My family is able to make it to every single one of my games. So I just love being able to stay here and be close.”

KM: Who is the best dancer on the team?

EW: “I think Karli Ricketts is probably the best answer.”

KM: You hit your first collegiate home run against St. Thomas? What was that feeling like?

EW: “It was a great feeling. It was kind of a relief, just like pressure to do well. And it was great to just finally get that first home run out of the way.”

KM: Who is an upperclassman that you look up to or have formed a relationship with?

EW: “I really look up to [Mackenzie Griman] because she just always is working hard on and off the field and in the classroom and I just love her work ethic.”

Ellie Boyer is a 5-foot-3 infielder from Kokomo, Indiana. She majors in actuarial science. Photo courtesy of Butler Athletics.

KM: When did you know that you wanted to play Division I softball?

Ellie Boyer: “I started going to camps and stuff like that at the beginning of middle school. That’s when I really fell in love and knew I wanted to do this at a higher level.”

KM: What has been your favorite game or series so far this season?

EB: “Probably Villanova … I feel like everyone brought the energy to that game and that series was fun.”

KM: What’s your favorite animal and why?

EB: “Dogs. I have two of them — a rottweiler and a chihuahua. The little one runs the show, of course.”

KM: Who is an upperclassman that you look up to or have formed a relationship with?

EB: “There’s a couple, but one of them is Maddie Moore. We play the same positions and she’s always been a leader, cheering me and encouraging me.”

Sydney Carter is a 5-foot-6 infielder from Mason, Ohio. She majors in sports media. Photo courtesy of Butler Athletics.

KM: When did you know that you wanted to play Division I softball?

Sydney Carter: “I was in eighth grade when I got my scholarship offer here. That was before they made the rule change that you can’t commit until September 1 of your junior year. So right around seventh or eighth grade, I knew that I wanted to play Division I.”

KM: What has it been like going to college out of state?

SC: “I think that this is the perfect distance for me. I know it’s out of state, but it’s only two hours. My parents are able to come to every game and when I really want to go home, I’m able to do that pretty easily. So even though it’s out of state, it’s not too far and it’s very manageable.”

KM: Since Kings Island is in Mason, what’s your favorite ride there?

SC: “I just recently went on the Diamondback for the first time, that was pretty fun.”

KM: You played basketball in high school. What position did you play and what was your role on the team?

SC: “Yeah I did, I played shooting guard. My role was to be quick on defense and shoot a lot.”

KM: Who is an opponent you haven’t faced yet that you’re looking forward to?

SC: “I’m excited to play Georgetown because I’ve never been to Washington, D.C., and we [are going] there this year. So I think I’m excited for [those games].”

KM: Who’s the funniest person on the team?

SC: “It’s a mix between Bri Avery and Karli Ricketts. Those two are the funniest people on the team.”