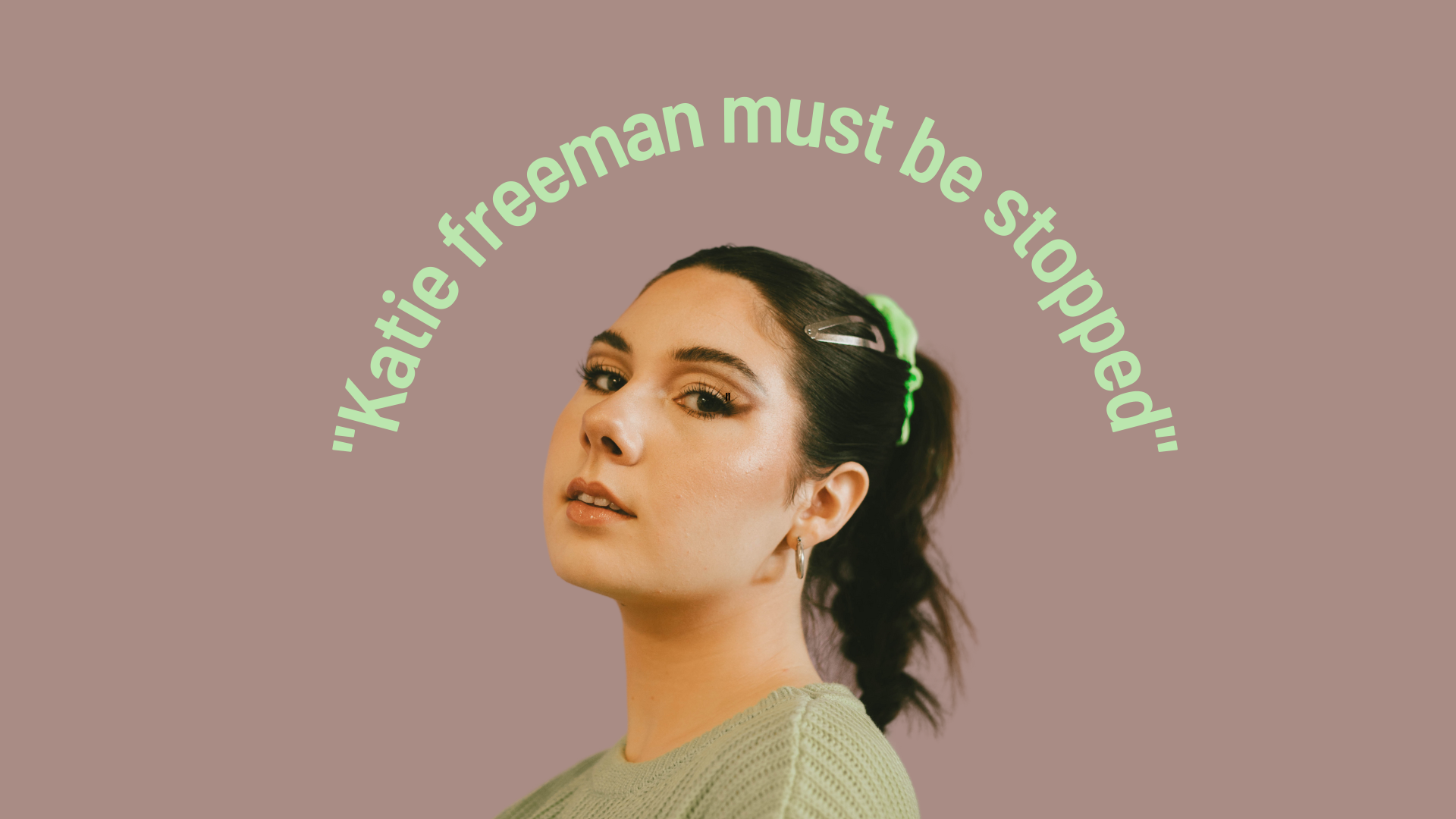 Katie Freeman’s favorite hate comment — which served as inspiration for the title of this senior sendoff — superimposed above one of her favorite photos. Photo by Kelsey Matthias. Graphic courtesy of Katie Freeman and her haters.

Sometimes, I forget that this is a job. Or that it’s optional.

I’m certainly not doing it for the money. I doubt anyone on staff is, considering a single Collegian paycheck can barely cover the cost of a Chipotle bowl. I certainly appreciate the ability to receive some form of compensation for the long hours we spend hunched over our laptops like little shrimp, slaving away in the name of student journalism. But I’ll let you in on a secret — I can’t recall cashing more than five paychecks from the Butler Collegian in the past four years.

Maybe it’s my habitual procrastination, considering I didn’t fill out my staff paperwork until my sophomore year. Perhaps it’s my chronic forgetfulness, as I have to regularly be reminded by my co-editor to fill out my pay stub and often lose the checks I do receive. Mostly, it’s because I would do this for free.

You might ask why, and that is an absolutely fantastic question, considering this job is incredibly stress-inducing, exhausting and thankless. I’ve been told to “tone it down” and “get a life,” have been accused of trying to “indoctrinate the student body by spreading lies and rogue ideologies,” had stories on serious topics referred to as satire and found comments comparing my appearance to that of Ms. Piggy’s. My Twitter header features my favorite critique, which reads “Katie Freeman must be stopped.”

But I won’t be. The sleepless nights and poorly-written jabs are overshadowed by the echoes of late-night laughter drifting from the Collegian office, the smell of freshly-printed papers and the deep satisfaction I get when I click “publish” on WordPress.

However, my relationship with the Collegian hasn’t always been sunshine and rainbows. I have cried more tears over this godforsaken — take that as a term of endearment — newspaper than I can count. Let me tell you, this whole journalism thing consistently tests every ounce of my willpower and keeps me looking more like Michael Yagoobian from “Meet the Robinsons” than a normal, well-rested college girl. But I never let that stop me, even when I was stuck writing a news piece for the fifth straight week and would have literally rather licked the floor of Atherton Union than address one more comment on my doc.

It took me a minute to find my place in this paper. I’ve ping-ponged from news to culture to opinion, dipping my toes into every section but sports — shocker, right? I stumbled into the position of opinion co-editor with a mere handful of opinion articles under my belt and zero official editorial experience, knowing only that I had much to say and nowhere else to say it.

I love my section because it allows me to reflect my expressive personality on paper; it offers up a space where I can let the words flow freely — within reason. For me, writing has always come naturally. I can barely calculate the tip on a check or balance an equation, but I will proofread the sh*t out of that angry text to your boyfriend. I’ve been writing since I learned how to. Of course, as a Leo rising, keeping my stories buried in my notebook was never enough.

I secured my first — technically unofficial — editorial stint in middle school. When I entered the sixth grade, I found myself deeply frustrated by the lack of a school newspaper and decided to craft one myself. Due to a lack of resources, The Sixth Grade BiWeekly took the form of notebook paper I would tear apart and staple together to make a miniature leaflet of approximately 10 pages. Unfortunately, I’ve lost every copy, but I know for certain it featured faculty spotlights and an advice column — the sort of content that, in retrospect, perfectly precursored my current position on the Collegian. Hey, opinion!

So when I walked into my first Collegian meeting way back in the olden days of 2018, I had fully accepted this as an innate part of my college experience, perhaps even a duty — one that I would not abandon. It could be because my mother read me “Winners Never Quit” every night when I was younger, but it’s probably because I’ve dreamed of doing this my whole life.

Writing this piece is to directly confront the fact that the hourglass which keeps track of my time on this campus is reaching the last few grains of sand, and soon, I won’t get to do this anymore. Truthfully, I’m terrified. From the moment I realized that I loved Butler University and the people within it, I’ve been worried about one day having to leave.

Starting sometime my junior year — when I’d surpassed the halfway mark of my college career — I would occasionally ask Siri “How many days are there until May 5, 2022?” The answer was somewhere around 543 back then, a quite roomy number that left plenty of space for time spent with friends. Right now, it’s 32, and it’s gut-wrenching.

While I might be dramatic, I’m not an overly emotional person. I’d much rather internalize, rationalize or ignore those pesky feelings, but with graduation being almost exactly a month away, I seem to have backed myself into a corner. I’ve got to face it; I have to go.

I have been taking the long way home recently, driving through campus rather than the shortcuts just outside of it. Usually, it’s around sunset when I round the corner past Chatham Tap or head down Clarendon, and as I drive past, I see ghosts of my former selves haunting this campus through my watering eyes.

I’m only in my car, but in my mind, I’m in a million different places.

I’m in the living room of my zoo of a senior house, surrounded by more people than I ever knew it was possible to be close to. It’s July, and we’re throwing a Halloween party. Polaroid flashes freeze smiling faces and gorgeous laughter into a rectangle now taped to my wall, and though it’s nighttime, I realize how lucky I am to bask in their unadulterated sunshine.

I’m laying on the football field at midnight with my golden-haired managing editor after being convinced to take a night walk, the kind I never want to go on but am immediately grateful for once I get my legs to start moving. She’s the person I want to be: intelligent, driven and effortlessly hilarious. I’ve never met anyone more actively supportive, and without her constant push to get sh*t done, I would be a trainwreck.

I’m sitting on a kitchen table in my sorority house gripping my best friend in a tight embrace, and both of our faces are streaked with mascara tears. We really couldn’t be more different, but she’s my other half. Her friendship is liberating — from clothes to conversation topics, nothing is off-limits. Her loving arms are home to me; a place where I can drop my anxieties off at the door like briefcases after a long day at work. I’m crying because I don’t want to leave her side; I’m terrified of the day her arms become out of reach.

I’m catapulted back to reality when I park in my driveway and think of my lease, which unfortunately happens to end the day after graduation, and I panic a little.

When I first felt the graduation worrybug bite, I sought solace in the fact that I’d hopefully be sick of this place by the time that day rolled around. Spoiler: I’m not, but I’m grateful for that.

I’ll keep the yearbook open in my mind — and probably on my Instagram feed — and the pages of the Collegian open in my Google Chrome browser. And when I face the future head-on, I’ll think of the safety net of support knitted by my friends, of every hurdle jumped thus far and the fact that Katie Freeman cannot be stopped.

Contributor
Tags haters are my motivators, i heart the collegian, i started crying before i wrote one word of this, jokes on y'all i've got more to publish, Katie Freeman, katie freeman cannot be stopped, mom can u pick me up i have to graduate and im scared, ms piggy, senior goodbye, Senior sendoff, The Butler Collegian