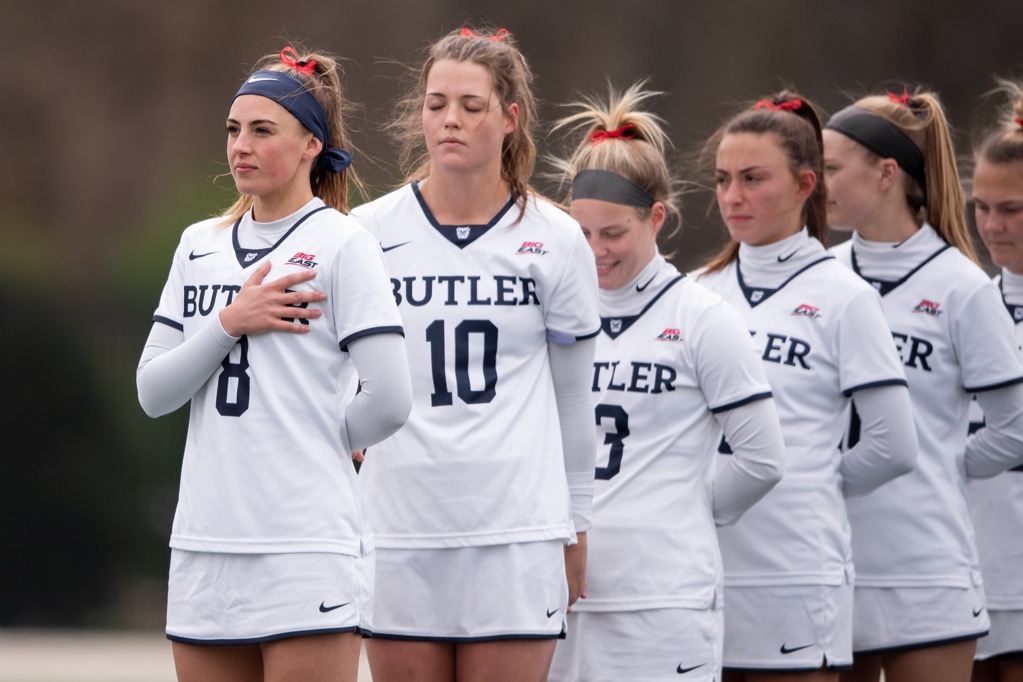 Members of the Butler women’s lacrosse team stand on the sideline during the national anthem prior to matchup against the University of Denver on April 2. The Dawgs went on to lose 8-17. Photo courtesy of Butler Athletics.

Butler softball was shutout 6-0 in a non-conference matchup with the Flyers. Dayton scored in four different innings while Butler only managed three hits. Butler’s Madison Seigworth started for the Bulldogs, striking out two but allowing seven hits, two walks and four runs. Mackenzie Griman provided relief from the bullpen for Butler.

The Butler’s women’s tennis defeated IUPUI 6-1 at the Butler Bubble. IUPUI earned a point in doubles but lost all of the singles matches in straight sets. Butler’s Delaney Schurhamer won at the top spot, winning 6-1 in both sets, while her teammates Katie Beavin, Emma Beavin, Norah Balthazor and Veronika Bruetting won their respective matches in similar fashion.

The men’s tennis team won their sixth straight matchup with a 6-1 win over Bellarmine. Butler took the doubles points with victories from Thomas Brennan and Alvaro Huete Vadillo in the top spot and Ryan Roegner and Zach Trimpe at the third spot. In singles, Michael Dickson and Huete Vadillo won at the second and third spots, respectively. Huete Vadillo extended his singles win streak to eight consecutive matches.

Softball takes game one over UConn

Butler softball beat the UConn Huskies 6-2, scoring all six of their runs in the first two innings. Alyssa Graves started for Butler but was relieved by Karli Ricketts in the first inning. Ricketts earned the win, only allowing three hits while striking out ten. Monique Hoosen had her eighth home run of the season while Maddie Moore was the only Bulldog to record two hits.

The Bulldogs won 1-0 thanks to a walk-off single from James Gargano in the ninth inning. Cory Bosecker pitched 6.1 innings of the contest, striking out 11 Panthers before Lukas Galdoni came in to pitch the final innings and complete the shutout.

Men’s and women’s track at the Redbird Invitational

The Butler women’s lacrosse team was defeated in a 17-8 blowout to No. 9 ranked Denver. Denver got off to a quick start with a goal in the first minute and built a 5-1 lead after the first quarter. Butler was never able to mount a comeback but Campbell Connors and Gabryelle Bodine had impressive performances with two and three goals, respectively.

The Butler softball team lost the second game of their series with UConn, 5-0. UConn built up their lead over the course of the game, scoring one in the first, one in the fourth, two in the sixth and one more in the seventh. Butler had the bases loaded in the bottom of the seventh with two outs but couldn’t manage to get a run in.

Butler allowed Eastern Illinois to score in three consecutive innings on the way to the 3-2 loss to the Panthers. Aaron Barokas pitched the first four innings while Jon Vore finished the last five for the Bulldogs. Ryan O’Halloran had an RBI triple in the second for Butler’s first run while Aaron Steinhart homered for the second run in the sixth inning.

UConn took the series against Butler with a 3-0 win in the final game. After going scoreless in the first three innings, UConn scored their runs in the fourth, fifth and seventh innings. Lauren Fey and Ella White produced the only Bulldog hits in the loss.

Baseball wins both in doubleheader against Eastern Illinois

The Bulldogs took the series in a 3-1 fashion after winning both games of the Sunday doubleheader – 2-0 and 2-1. In game one, Butler scored two runs in the second inning off of a Billy Wurch solo shot and a Garret Gray RBI double that sent James Gargano in for the run. Game two required extra innings, but Scott Jones hit a walk-off single for the win in the tenth inning.

Women’s golf at the Colonel Classic

Butler finished eighth out of a field of 13 at the Colonel Classic in Richmond, Kentucky. Ally Ross posted a one-under in Tuesday’s round and led the Bulldog’s with a third place finish. Ross’s final round of 71 included five birdies and only one player in the field shot better than her 71.

The women’s lacrosse team cruised to victory against St. Ambrose winning 21-2. Butler had 17 different goal scorers in the game and all three goalies saw action. The Bulldogs put the game out of reach quickly, scoring eight unanswered and earning an 11-1 lead after the first quarter. Morgan Cox led the way for Butler with two goals and three assists.

Butler’s baseball team fell 5-2 to No. 13 Notre Dame. Butler was led offensively by Aaron Steinhart who finished with two doubles and an RBI. The Bulldogs used six different pitchers, none pitching for more than three innings. After Butler jumped out to a 2-0 lead in the first inning, Notre Dame responded with five unanswered, three of which came in the sixth inning.