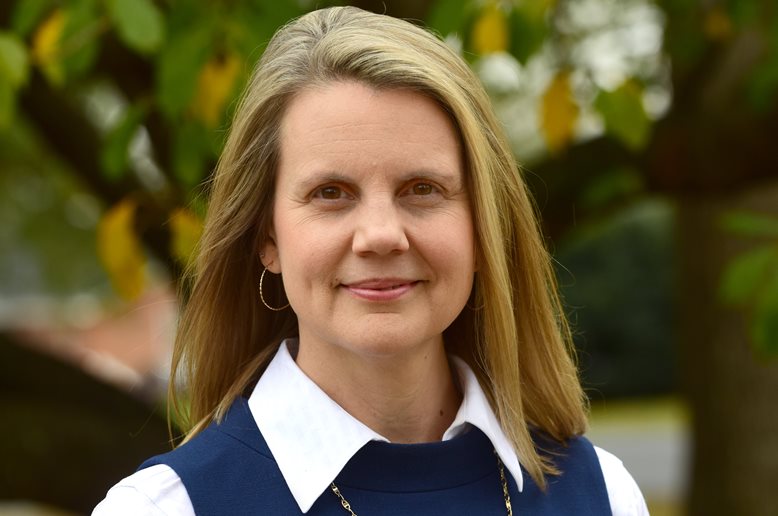 Brooke Barnett takes on the role of official provost and vice president for academic affairs. Photo courtesy of butler.edu.

Over the past year, Dr. Brooke Barnett could be found on campus meeting with deans, speaking at admissions events or working on various Butler initiatives. Even as a high ranking administrator, Barnett always made time for one of her favorite activities, walking around campus and chatting with Butler students.

Barnett came to Butler in 2019 as Dean of the College of Communication. She moved up and became interim provost last spring when former provost Kathryn Morris accepted a position as President of St. Lawrence University. On March 15, 2022, Barnett was officially named provost and vice president for academic affairs at Butler University.

In an email sent to the Butler community, President James Danko said a national search was conducted for the position over the past five months. After reviewing over 400 candidates, the search committee strongly endorsed Barnett, and she was offered the position.

Before coming to Butler, Barnett worked at Elon University for 18 years. Prior to working in higher education, Barnett worked as a journalist and news director at WTIU, the public television station in Bloomington, IN. Barnett said she is able to draw on many of the skills she acquired in those roles.

“I was managing people in that context and working in a community, and I transfer a lot of those skills into thinking about this type of role,” Barnett said. “So how do you run an efficient and productive meeting? How do you meet deadlines and progress and move toward things, you know, be thoughtful, make decisions, move on. And journalism was helpful for that because you couldn’t get in an unending swirl of analysis. Sometimes you had to move with the most complete information you had and then be willing to adjust as you go on.”

Barnett said her previous experience both professionally and in higher education along with her current network of academic professionals all influence how she thinks about being a leader moving forward.

Additionally, Barnett said she values and relies on feedback from the people around her.

“I really appreciate when people tell me what I don’t know or don’t see, give me their vantage point, tell me about their lived experience,” Barnett said “ … Ultimately, as a leader, you’ve got to collect a lot of information and when the decision is yours to make, you make it and you have to own it and you have to change course if it’s the wrong direction.”

As provost and vice president for academic affairs, Barnett is the second-ranking administrator at Butler, meaning she assumes senior administrative responsibilities in the president’s absence. She also serves as chief academic officer of the university. She oversees the deans of the six colleges, the dean of libraries and other curriculum and academic based resources, some of which include academic advising, the Honors Program and the Center for Faith and Vocation.

Mary Proffitt, assistant to the dean in CCOM, worked closely with Barnett during her onboarding and time as dean. Proffitt said Barnett’s greatest strength is her ability and drive to be inclusive. She said Barnett truly believes everybody — students, faculty, staff, community members, board members and administrators — should be treated equally and fairly.

“She more than anyone I had worked for in my Butler history was so aware of the importance of elevating staff and the importance of staff work and opinions — the value that we can bring to the job,” Proffitt said. “Our institution is based on educating students, so that’s the faculty and that’s the students, but so much of what needs to happen at Butler, the staff drives. And it’s sometimes an afterthought. Brooke started every sentence with staff and faculty, staff and faculty, and not a lot of people have done that in the past. So her care and respect for everyone, no matter what their rank or role, I think is what makes her an incredible leader.”

Karen Pore, assistant provost and university registrar at Campbell University, worked with Barnett at Elon. Pore said Barnett’s strengths as a leader include listening, collaboration and bringing numerous voices to the table, which Pore believes will serve her well in this role.

“One thing I’ve always thought about Brooke and her approach is that she is a very caring administrator,” Pore said. “She sees strategic decisions from multiple sides. A lot of her work at Elon was about inclusivity, and she thinks that way naturally in the sense of a process or a strategy — how does this apply to the goal that we want to do and then how can we bring people on board.”

Both Barnett and Pore acknowledged that in an administrative role, it can be difficult to engage with students on a daily basis. This is something that as dean and now provost, Barnett has tried to change.

Whether it is attending events such as Pasta with the Provost, scheduling one-on-one coffee meetings or sending check-in notes via email, Barnett said she makes a point to work student interaction into her schedule.

“That’s my joy and passion and the reason that I’m in higher ed,” Barnett said. “And also I learn so much from students and hearing that perspective, and I just genuinely enjoy that interaction, so there’s some kind of things I insert into the day that wouldn’t naturally happen. I think that makes me better as a leader but it also just gives me personal satisfaction.”

When she meets with students, Barnett said she always asks questions such as “what’s working well at Butler, what would you like to see improved and how can we better serve you as a student?” She said this creates two-way communication where students can share how they see things on campus and sometimes Barnett can share perspectives she hears from other students, faculty, staff, alumni or community members.

Mike Lee, a senior digital media production and strategic communication double major, first met Barnett when she started as dean of CCOM. He said she reached out to get to know the students and learn more about the college.

Lee said throughout his four years, Barnett has continued to check-in, especially during the pandemic. He said she wants to learn about his experience as a student, but also just get to know him as a human being.

As a CCOM student, Lee said he saw firsthand the changes Barnett was able to make during her time as dean and the things that made her successful in that role will serve her well as provost.

Proffitt said when she was in charge of making Barnett’s schedule, it was imperative that student meetings took precedence over a lot of other things. Proffitt said she had never seen a dean who was so interested in connecting with students — current students, incoming students and alumni.

Making students a priority is nothing new for Barnett, according to Pore.

“She’s never lost sight of the student,” Pore said. “And sometimes as administrators it’s easy to do because there’s a lot of things that go behind running an institution and sometimes our student interaction gets less and less in that regard, so she’s always made it a point to know students and what students want and she naturally cares for students.”

As he gets ready to graduate, Lee said he hopes administrators, like Barnett, will continue to communicate with students and keep them informed.

“Looking back on my four years here, it’s really important to be transparent with the students and just really tell them what’s going on,” Lee said. “Just making sure that students are being taken care of first. I think if Butler hires people like Brooke Barnett in the near future, we’ll be set.”