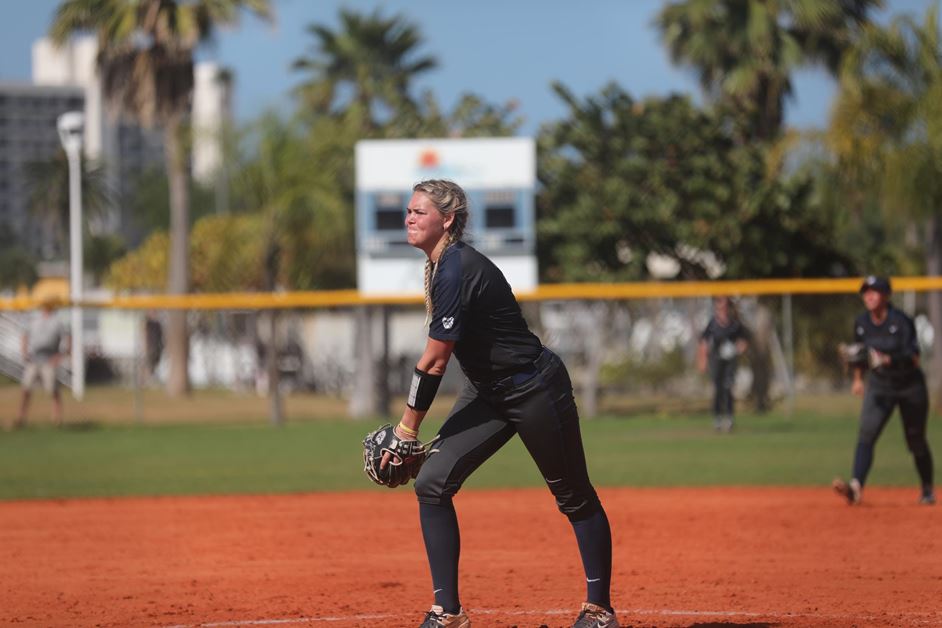 Senior Karli Picketts pitching against Ohio State during the 2022 Spring Games in Leesburg, Florida. Picketts is 5-1 as a starter this season. Photo courtesy of Butler Athletics.

Throughout the first month of the season, the Butler softball team has amassed an 8-6 overall record and sits in second place behind Creighton heading into Big East play. The Dawgs hot start in February puts them into a good position entering their conference schedule, and has already exceeded the low expectations set for them entering the year. But the true test lies ahead for the Bulldogs, as Big East play begins on March 11 with a three-game road series versus Villanova.

Villanova received six first place votes, while DePaul — who is projected to finish second — received three. Butler was predicted to finish fifth behind UConn and Creighton in third and fourth, respectively.

While the preseason top team was not highly debated amongst experts and analysts, there was some variety in predictions for the Big East preseason Player of the Year — due to the large pool of talent to choose from. However, Butler’s Lauren Fey and Villanova’s Paige Rauch were the main favorites. Rauch was also selected as a preseason All-American by both D1Softball and Softball America.

Currently, Creighton leads the Big East in win percentage at .583 with a 7-5 record, but Butler and UConn are both tied at 8-6, leading all teams in wins entering conference play.

After an exciting season in 2021, the top spot in the conference and the Big East title will be up for grabs in 2022. Villanova, UConn, Butler, DePaul and Creighton are all expected to be contenders for a Big East Championship, but a strong start from many of the remaining teams should make for another interesting season.

Senior Karli Ricketts has been a major factor for the Bulldogs’ early hot start. Ricketts, a 2021 All-Big East First Team member, was named Pitcher of the Week following her performance at the 2022 Spring Games in Orlando, Florida.

In the 2022 Spring Games, Ricketts allowed just six hits and zero runs in 13 innings over two starts. Ricketts currently owns 39 strikeouts on the year, while Georgetown’s Kayla Dunn leads the conference with 52.

Rauch receives more attention than any other player in the Big East — and for a good reason. Now in her fifth year, Rauch remains the top pitcher in the conference and added a long list of awards in her 2021 season to her already impressive resume.

Most notably, Rauch is the reigning Big East Player of the Year and Big East Pitcher of the Year. She was also recognized as the Big East Championship Most Outstanding Player and was pitcher of the week in the conference five times. Rauch is already off to a hot start in 2022 and has already amassed 43 strikeouts throughout the first month of the season.

Despite Rauch’s prowess, she has yet to be named Big East Player of the Week this season. Nicole Sullivan of DePaul and Janae Barracato of Seton Hall each received those honors throughout the first two weeks.

Sullivan, a sophomore shortstop, was a big reason DePaul jumped to a 5-0 start. Sullivan went 5-11 at bat and held a perfect fielding percentage throughout the first week. Sullivan also recorded her second career grand slam in the Blue Demons’ victory over St. Thomas.

DePaul, however, has lost eight straight since their undefeated start and now holds a record of 5-8.

Through 13 games, DePaul’s Brooke Johnson leads the conference in RBIs with 14, is second in slugging percentage with an .811 mark and fifth in hits with 15. Johnson, a junior, is already fast approaching her totals in both categories from 2021 with 31 hits and 24 RBIs in her sophomore season.

Along with her dynamic offensive game, Johnson is equally as versatile on defense having played numerous positions in her career including multiple starts at pitcher before switching to first base.

In the Blue Demons’ first game of the San Diego Classic against Iowa, Johnson set a new career high with three hits against the Hawkeyes in a 13-0 win. On top of being selected to the Big East Weekly Honor Roll, Johnson has demonstrated to be one of the Big East’s best hitters in 2022.

Coming into this season as a graduate student, Barracato is a former All-Big East Second Team selection back in 2019 and her explosive offensive skill has led Seton Hall to a 5-4 start. Barracato has always been a streaky hitter with a large upside and will look to improve on consistency in her final year as a Pirate.

Barracato’s teammate Lauren Caye was selected as the conference Freshman of the Week in the same week as Barracato’s Big East Player of the week selection. Caye hit two massive home runs in the same inning as a pinch hitter for the Pirates in a win against the UMBC. So far, Caye looks to be one of the top young offensive players in the Big East.