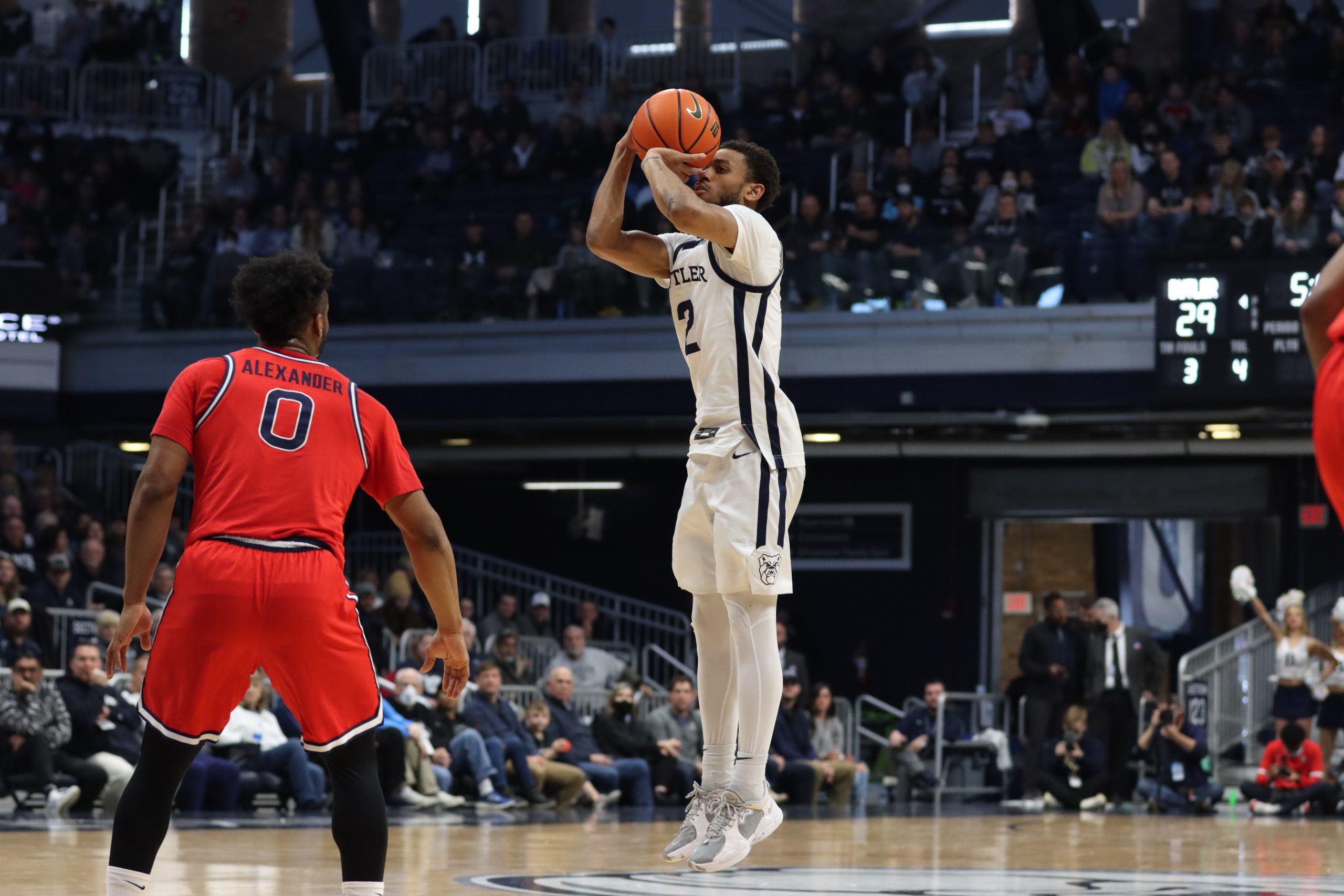 Guard Aaron Thompson shoots a three-pointer against St.John’s in a matchup on Feb. 5. The men’s basketball team has lost three straight games by one possession. Photo by Francie Wilson.

The women’s tennis team will travel to Bloomington to play an in-state match against Indiana. The Hoosier’s are currently 2-1, while the Bulldogs are sitting at 1-4 after getting their first win last Saturday — beating Milwaekee 6-1. First serve for the match is set for 4:30 p.m.

Coach Godlevske and the women’s basketball team will be looking to knock off St. John’s for their first conference win of the season. This will be the first and possibly the only time these two teams see each other, as the first meeting was canceled due to COVID-19 protocols. The team hopes to continue the positive play they showed late in January with two hard fought games against Villanova and Georgetown.

Softball at the DePaul Dome Tournament

The softball team will kick off its season in the DePaul Dome tournament. The team will face the likes of Bowling Green, Valparaiso, Murray State, University of St. Thomas and Western Illinois, all in a four-day stretch.

Men’s and Women’s Track at The Husky Classic

The men’s and women’s track teams will send those competing in distance events to the Husky Classic in Seattle, Washington. Both teams had successful meets at the Meyo Invitational at Notre Dame last week. Men’s runner Simon Bedard broke the program’s mile time, while women’s runners Corinna Pena and Katherine Olsen won their respective mile runs.

The Grand Valley State University Big Meet will feature the Butler men’s and women’s jumps and hurdles athletes. Last time out, Niki Ezeh broke the program’s long jump record with a jump of 5.59m. This is a highly competitive meet and should be a good test for both teams.

The women’s basketball team will play their first of two games within a week against Providence. If Butler plays well, they could steal a win from a Providence team who has struggled of late — losing four in a row.

The women’s lacrosse team will look to start their season off on the right foot against Kent State. This year’s team will feature a mix of young and old with 11 freshmen and 10 seniors.

The Butler men’s basketball team will play a Saturday afternoon game at Hinkle Fieldhouse against Marquette. The Golden Eagles are currently ranked No. 18 in the nation and will be a big test for a Butler team looking to get back in the win column after losing close games to Xavier, St. John’s and Creighton. The game also serves as an opportunity to get a solid win and build their season resume.

The Butler men’s golf team will travel to Palm City, Florida at the Hammock Creek Golf Course to play in the UNC Greensboro Collegiate. This will be the team’s second tournament of the season following Big East match play on Feb. 7-8.

The weekend road trip for the women’s basketball team will conclude with a game in Omaha, Nebraska against Creighton. Butler lost in a blow out in their last matchup with the Bluejays, 95-44.

The Butler men’s tennis team plays an in-state opponent in Ball State. This should be a close match as both teams faced Cleveland State late last month and won handily — Ball State winning 6-1 and Butler 5-2.

The women’s golf team will play in the Jacksonville Invitational in Jacksonville, Florida. The team will look to continue where they left off in the fall after finishing second in a 12-team tournament in Ohio.

The men’s basketball team travels to Chicago in an attempt to complete the season sweep of DePaul. DePaul is a team who has struggled this season much like the Bulldogs, which should make for a good game. DePaul did knock off ranked Xavier last week which could build some momentum which Butler will look to put to a halt.