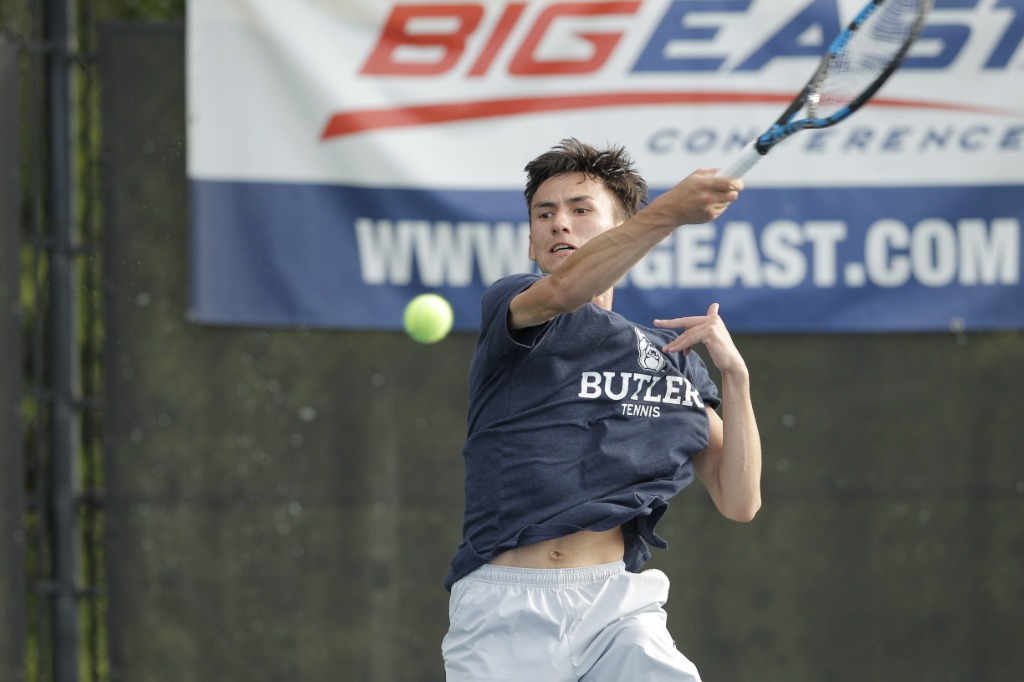 Senior Tom Brennan returns a serve during the 2021 Big East tournament. Brennan competed against the No. 30 ranked singles player in the country, Stijn Slump, but ultimately fell in the tie breaker 12-10. Photo courtesy of Butler Athletics.

This past weekend the men’s tennis team traveled to Tennessee for a double header of matches against Middle Tennessee State on Friday and Lipscomb on Sunday. The Dawgs came away even as they fell to MTSU 0-7, and were victorious against Lipscomb 4-3. The team now sits 1-2 on the season.

The Butler men’s tennis team traveled to Murfreesboro on Jan. 21 to take on the Blue Raiders of Middle Tennessee State.

Butler Senior Tom Brennan took on the Blue Raiders’ first singles man, Stijn Slump. Slump ranks as the No. 30 singles player in the country. After splitting the sets 3-6, Brennan fell just short in a 12-10 tiebreaker.

The Dawgs fought diligently but were unable to claim a match against MTSU, ultimately falling 0-7 in a clean sweep by the Blue Raiders.

On Jan. 23 the Dawgs traveled to Nashville for their most even matchup of the season against the Lipscomb Bison.

Michael Dickson and Drew Michael at second doubles and Patrick Joss and Zach Trimpe at third doubles both picked up 6-3 wins to give Butler the opening point.

Butler’s first two single choices, Tom Brennan and Alvaro Huete Vadillo each picked up wins in their individual matches before combining for the first doubles victory that would ultimately see the Dawgs triumph over the Bison, 4-3.