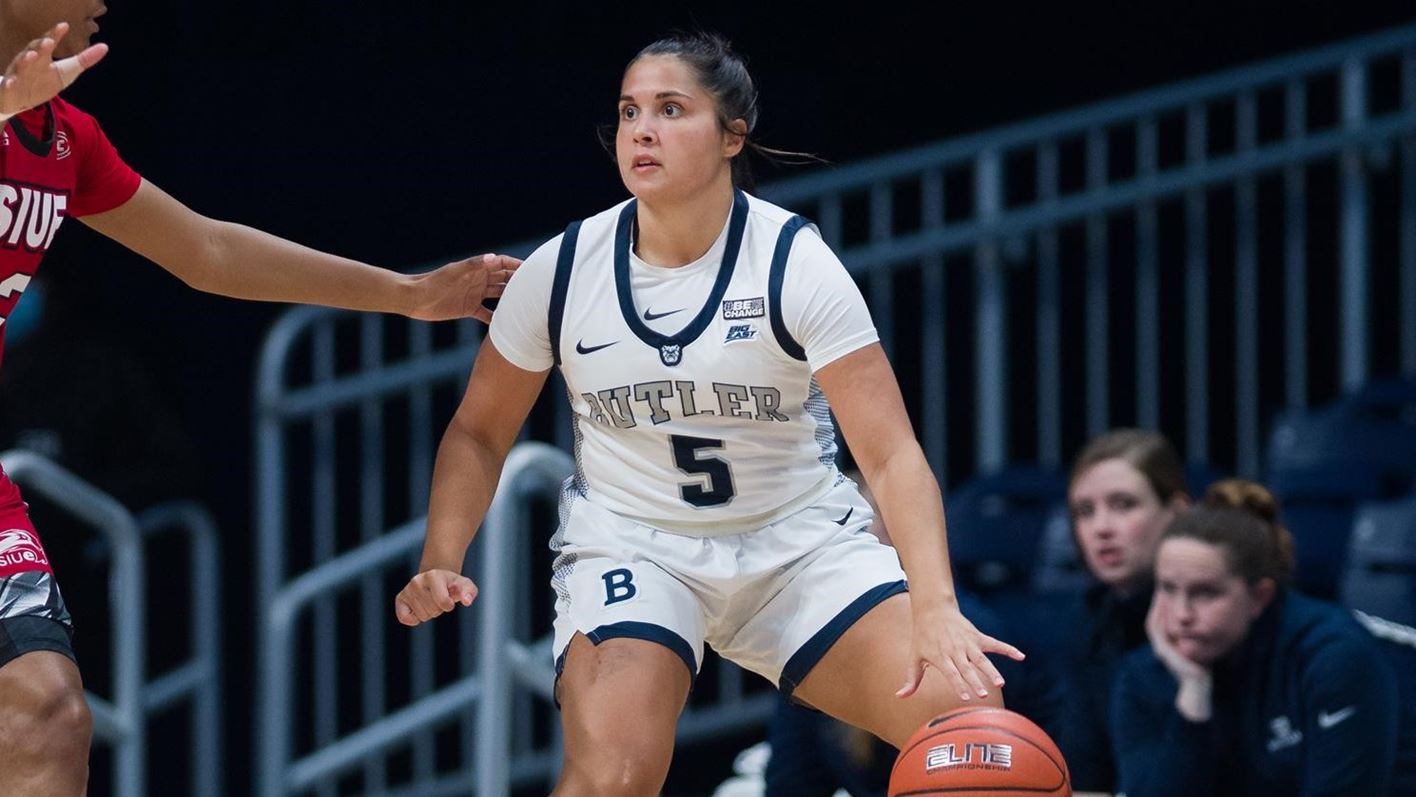 Senior guard Emilia Sexton surveys the court in a matchup against SIUE on Nov. 23. Sexton leads the Bulldogs with three-pointers made this season. Photo courtesy of Butler Athletics.

The women’s basketball team hosts the Bluejays on Wednesday at Hinkle Fieldhouse. The Bulldogs are 1-12 heading into this week’s matchup after a tough loss to No.9 UConn Jan. 12. Tip-off is at 6 p.m. and can be viewed on BEDN on FloSports.

After losing to UConn 59-76 on Tuesday the Bulldog’s will rematch the Huskies at Hinkle Fieldhouse on Thursday. The Bulldogs have a tough matchup ahead of them with UConn currently ranked in the AP top 25. Tip-off is at 9 p.m. and can be viewed on FS1 and WXNT 1430AM.

Both the men’s and women’s track team will travel to Bloomington on Friday to participate in the Gladstein Invitational. The meet will take place indoors in the Gladstein Fieldhouse — events on the first day start at 3:30 p.m.

The women’s swim team will travel to IUPUI on Friday to take on Illinois State. The Bulldogs have three more meets building up to their Big East championship on Feb. 23.

The women’s tennis team hosts Miami of Ohio on Thursday. The Bulldogs will look for revenge against the RedHawks after losing the last three meetings against them. The matches will begin at 3 p.m.

The men’s tennis team looks for a win this weekend as they travel to Murfreesboro, Tennessee to take on the Lightning. They aim to improve after a disappointing result against Western Michigan — the matches start at 5 p.m.

The women’s basketball team hosts DePaul on Friday at Hinkle Fieldhouse. The Demons hold a similar record to Creighton, currently sitting at 6-1 in conference play. Tip-off is at 7 p.m. and also can be viewed on BEDN on FloSports.

The Gladstein Invitational continues throughout the weekend with the final events being held on Saturday. The meet begins as early as 10:45 a.m., and Butler will be looking for more individual wins as the season progresses.

The men’s tennis team transitions quickly, playing back-to-back games in Tennessee. On Saturday they head to Nashville to take on Lipscomb. The matches start at 5 p.m.

The Bulldogs travel to Providence on Sunday to take on the Friars. Similar to UConn, Providence will be a tough matchup, currently ranked No. 21 in the nation. They hold a 14-2 record and are 4-1 in conference play. Tip-off is at noon and can be viewed on FS1 and WXNT 1430AM.

The women’s basketball team hosts their third game of the week against Marquette at Hinkle Fieldhouse on Sunday. The Golden Eagles currently sit at 4th in the Big East and hold an overall record of 11-5. Tip-off is at 2 p.m. and also can be viewed on BEDN on FloSports.