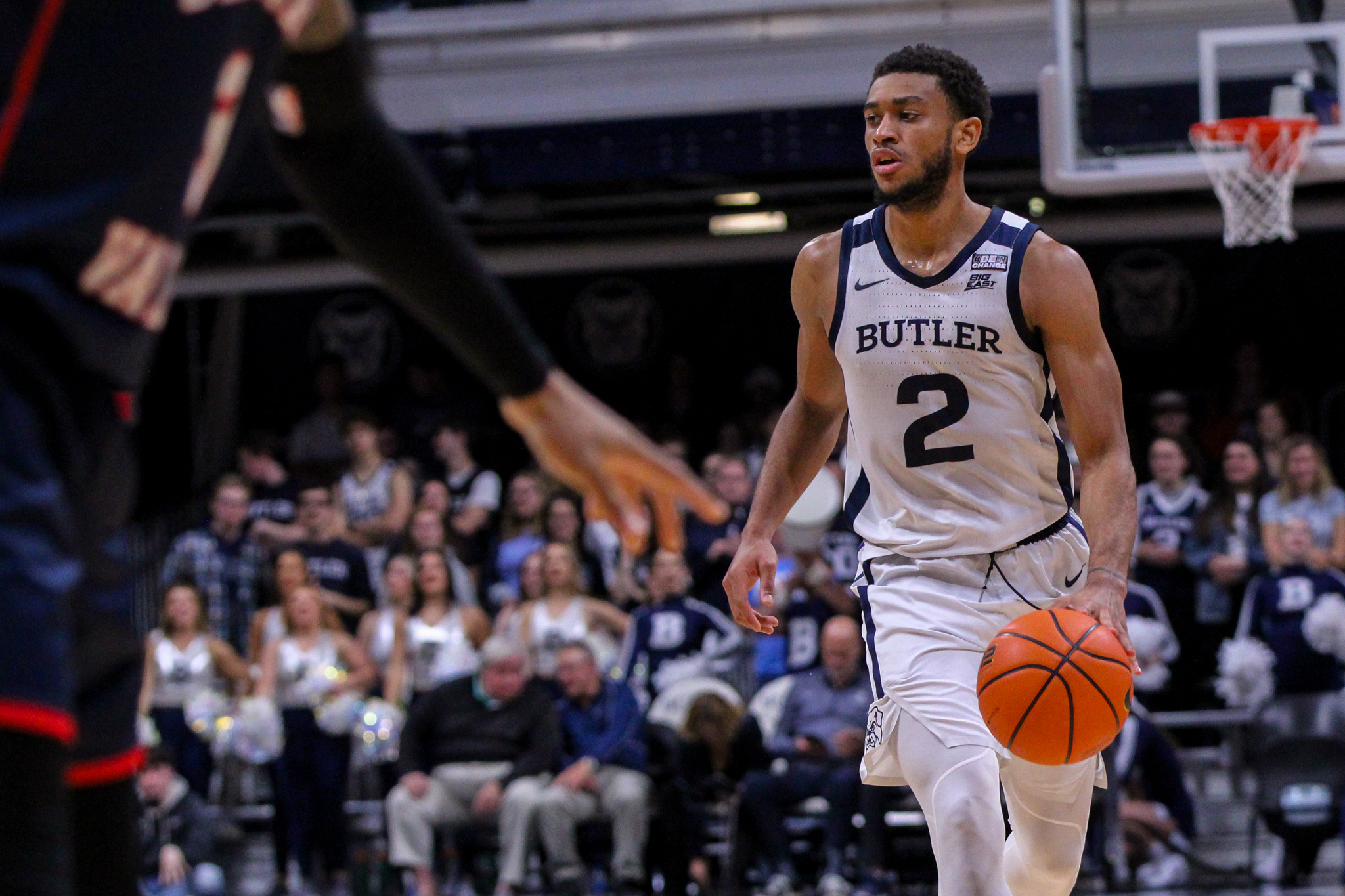 The Butler Bulldogs won 68-57 against the Division II Saginaw Valley State Cardinals last night, who stayed in the game until the very end. Guard Jair Bolden and forward Bryce Golden led the team in scoring with 15 points each. Freshman Jayden Taylor added 11 points despite only shooting 30% from the field. Aaron Thompson finished with eight points and six assists, and Christian David provided big minutes off the bench — giving the Dawgs five points and seven boards in 16 minutes of play.

There were a few ebbs and flows throughout the game for Butler, as they would go several minutes without scoring and struggled to stop the Cardinals from getting good looks. Their play on Tuesday night warrants some concerns as well as some relief as they prepare for their Big 12/ Big East matchup with Oklahoma on Dec. 7. Let’s go beyond the box score to see where the Dawgs are eight games into the season.

Playing two Division II opponents back-to-back, it was expected that the Dawgs would be able to play sound defense and run a pretty efficient offense. That may have been the case against Chaminade, it certainly wasn’t the case against Saginaw Valley State.

While turnovers weren’t a problem this game — Butler tied their season-low with 10 turnovers — the offense still struggled to consistently string together successful offensive possessions. In the first half, Saginaw Valley went on a 14-3 run to take a one-point lead with about a minute left in the period. Butler would open up the second half on a 15-4 run and lead by as much as 12 at one point. The Cardinals would then counter that with an 11-0 run of their own to cut the lead to five with five minutes remaining in the game.

While Butler conjured up enough runs to win, the multiple scoring droughts against a lesser team are concerning. During those droughts, the Dawgs struggled to move the ball around and settled for wild shots at the rim or low-percentage shots. These need to be cut down if Butler wants to compete against teams with better offense and defense than the Cardinals.

Jair Bolden has kept us in games all season, and will probably continue to

If it wasn’t for Bolden, Butler would have looked a lot worse than they did in the Maui Invitational. He has been the spark plug for the offense all season and has provided timely buckets for a team with multiple injuries and last season’s leading scorer missing in action.

Bolden scored 13 of his 15 points in the first half, going five for seven from the field and three for five from the three-point line. While he wasn’t producing as many points in the second half, he made it possible for his teammates to get good looks by drawing defenders to him.

Bolden leads the team with 12.6 ppg and is shooting 46% from three. For the Bulldogs to continue getting better offensively, they will need him to stay hot.

Looking ahead to the Sooners

The next matchup for the Bulldogs is against the Oklahoma Sooners in Norman on Dec. 7. The game is a part of an inter-conference battle with the Big East and Big 12.

The Sooners are 6-1 on the season and have a big matchup against No. 14 Florida today prior to playing Butler. Their only loss of the season so far came in a close game against Utah State in the Myrtle Beach Invitational Championship game on Nov. 21.

After losing a 2020-21 All-Big 12 First Team player in Austin Reaves to the NBA, their 6-foot-10-inch center Tanner Groves has stepped into the role of leading scorer for the Sooners. They like to play through the paint, shoot the ball well — an impressive 50% from the field this season — and like to get to the free-throw line often. The Bulldogs will need to focus on sealing the paint in order to come away with a victory in their first true road game of the season.