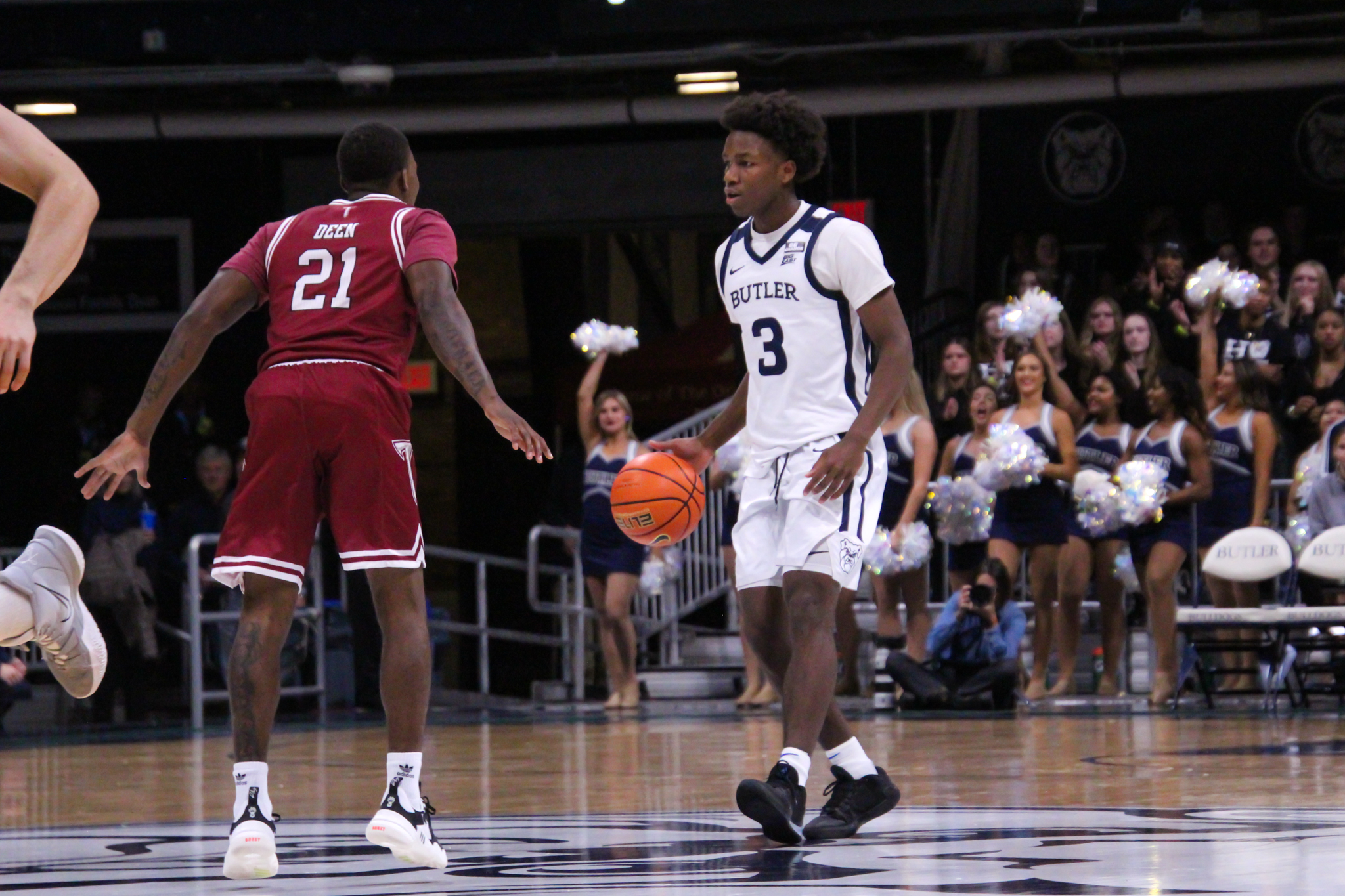 Sophomore guard Chuck Harris dribbles to the top of the key against Troy on Nov. 12. Harris is averaging 11.7 points per game this season. Photo taken by Claire Runkel.

The Butler’s men’s basketball team will strive to stay above .500 as they face Division II Chaminade University. This game will decide the seventh and eighth place teams in the Maui Invitational, being held this year in Las Vegas, Nevada.

Both teams suffered two losses to begin the tournament — Butler losing to Houston and Texas A&M and Chaminade losing to Oregon and Notre Dame. While Chaminade is clearly the “odd man out” in the tournament as the only Division II program, Butler doesn’t have any similar excuse to fall back on.

While the loss to Houston showed that they were just a more superior team to the Bulldogs at this point in the season, the loss to Texas A&M proved that Butler has a few too many areas that need improvement. Weak interior defense, poor shooting and careless mistakes leading to turnovers have been the story in each of their three losses this season — especially the two in Vegas. A win against Chaminade will not only give Butler some much-needed confidence, but also gives them a chance to begin fixing their weaknesses.

Here is what you need to know ahead of the matchup:

Who: Butler vs. Chaminade

Sophomore guard Chuck Harris led the Bulldogs in scoring a season ago with 12.9 ppg. However, the way Harris has been playing during the Dawgs’ three-game losing streak — you would have never known it. In the last three outings, Harris is averaging just 7.7 ppg, shooting 25% from the field and 26% from three.

He has very clearly not been on himself on the offensive side of the ball. Defenses have been forcing him to take long contested jumpers and 3-pointers, daring him to make a shot. Though he hasn’t shied away from shooting the ball, a shooter can only miss so much before their confidence begins to waver.

Due in part to Harris’ shooting slump, the offense has failed to get going early — averaging 21 first-half points in the past three games. Head coach LaVall Jordan will need to get Harris some open looks early. This will not only help Harris return back to himself, but also return the offense back into a functioning unit.

Chance for freshmen to see the court

Three freshmen — Jayden Taylor, DJ Hughes and Simas Lukosious — have seen some playing time during the Maui Invitational. All three should continue to see minutes tonight. The starting lineup should still remain the same, but all three have a chance to play bigger roles against an opponent that Butler is heavily favored over.

Taylor, already a member of the starting lineup, has shown bright flashes throughout the tournament, as his nine points in the second half against Texas A&M gave them a fighting chance late in the game.

Hughes has played some big minutes as Jordan used him in his bigs rotation to replace the injured Bryce Nze. The stat sheet doesn’t show how much Hughes has actually done, but his 6-foot-6-inch, 230-pound frame coupled with his physical play under the rim may warrant him some more time on the court going forward.

Lukosious, who started the first three games of the season while graduate student Aaron Thompson served a suspension, has some experience on the court. Like Taylor, the Lithuanian has shown glimpses of what he can do with his flashy passing ability and high basketball IQ. Turnovers have been the main reason we haven’t seen more of him, as he leads the team with 17. If he wants to see the court more, he will need to start by taking care of the ball tonight.