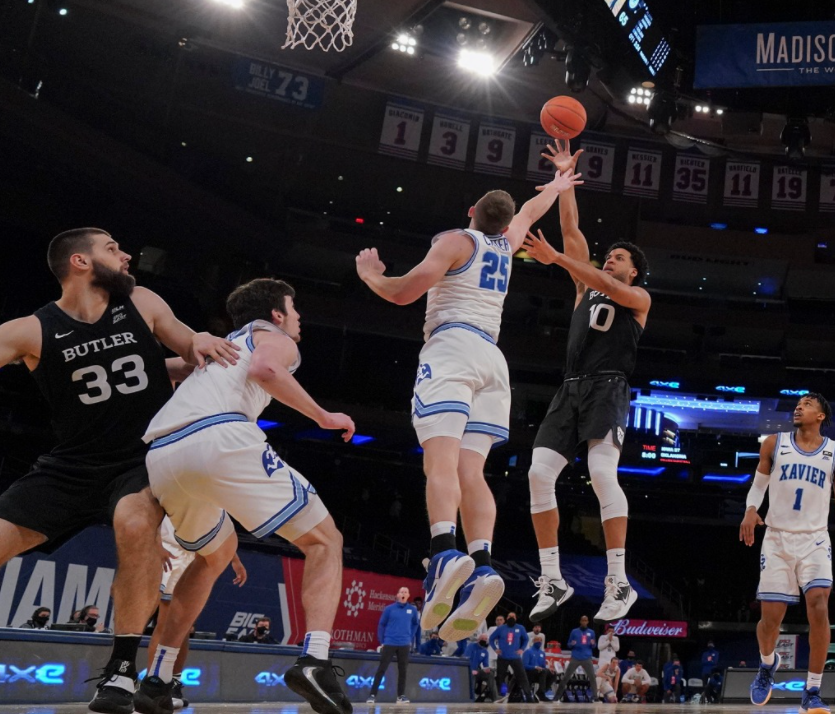 Bryce Nze attempts a shot over a Xavier defender in their Big East tournament matchup on March 10. Photo courtesy of Butler Athletics.

The long-awaited basketball season is finally within reach, as the men’s team plays their home opener against IUPUI in two weeks’ time on Tuesday, Nov. 9. This year brings a lot of excitement following an unsuccessful season where the team didn’t reach their goal of qualifying for March Madness.

Although the team didn’t play up to their usual standard, their overall record of 10-15 doesn’t reflect the overwhelming amount of talent on the roster. While the team had to deal with the adversity of the COVID-19 pandemic and losing key players, there were many bright moments during the past season to suggest this year will go differently.

Although the Bulldogs suffered a heartbreaking loss, their game against Marquette on Feb. 2 was extremely encouraging for then-freshman Chuck Harris. This was his breakout game, as he led the comeback attempt scoring 13 points in the second half alone. Harris would go on to finish the game with 16 points while shooting five of eight from the field, including four of five from behind the arc. Following this emergence, Harris continued to put up similar performances and took on a larger role for the remainder of the season.

The Bulldogs were in desperate need of a win entering their game against St John’s on Feb. 9. Butler was trailing for the majority of the game and managed to tie it up on an Aaron Thompson layup with two seconds remaining to send it to overtime. Then-freshman Myles Tate came up clutch in OT, stealing the ball with 31 seconds left, and then went on to hit the game-winning free throws. Thompson finished with 19 points, and then-senior Bryce Nze added 17 to help Butler overcome the Red Storm.

One of the best moments of the season came on Jan. 16 when Butler took down the No. 8 ranked Creighton Bluejays. Solid performances were put up by Thompson — who scored 17 points — and Nze who had the go-ahead layup with 68 seconds left in overtime to help the Bulldogs upset the Bluejays 70-66. The Bulldogs executed an impressive 13-point comeback as they were trailing 58-45 with only 7:38 left in regulation. Butler hopes for the same outcome when they host Creighton this season on Jan. 26.

Perhaps Butler’s biggest upset victory of the year came on Feb. 28 when they faced the No. 8 Villanova Wildcats. The Bulldogs’ backcourt was practically unbeatable, as Harris jump-started the offense early, and then-senior Jair Bolden delivered the finishing touch. Harris scored 15 of his 20 points in the first half and Bolden finished with 12 of his 15 in the second half to help Butler pull away for a 73-61 win. Butler had a total of 10 3-pointers, including two in the final minutes to seal the victory. The win couldn’t have come at a better time, as the team was dealing with a rough patch of losses mainly due to injuries and postponed games. Thompson missed the game with shoulder and thumb injuries and forward Christian David sat out with a knee injury. Butler will look for a similar performance when they face the Wildcats in Pennsylvania on Jan. 16.

On Wednesday, March 10, Butler was set to face rival Xavier in the first round of the Big East tournament. Butler was considered the underdog going into the game, and their greatest moment of the season came when the Bulldogs were able to seal the win in overtime, defeating the Musketeers 70-69. Harris was clutch for Butler, drilling a straightaway 3-pointer and then sinking the game-winning free throws with three seconds left in overtime. Harris finished the game with 21 points, and then-junior Bryce Golden and Nze came up big as well with Golden scoring 20 points and Nze scoring 19.