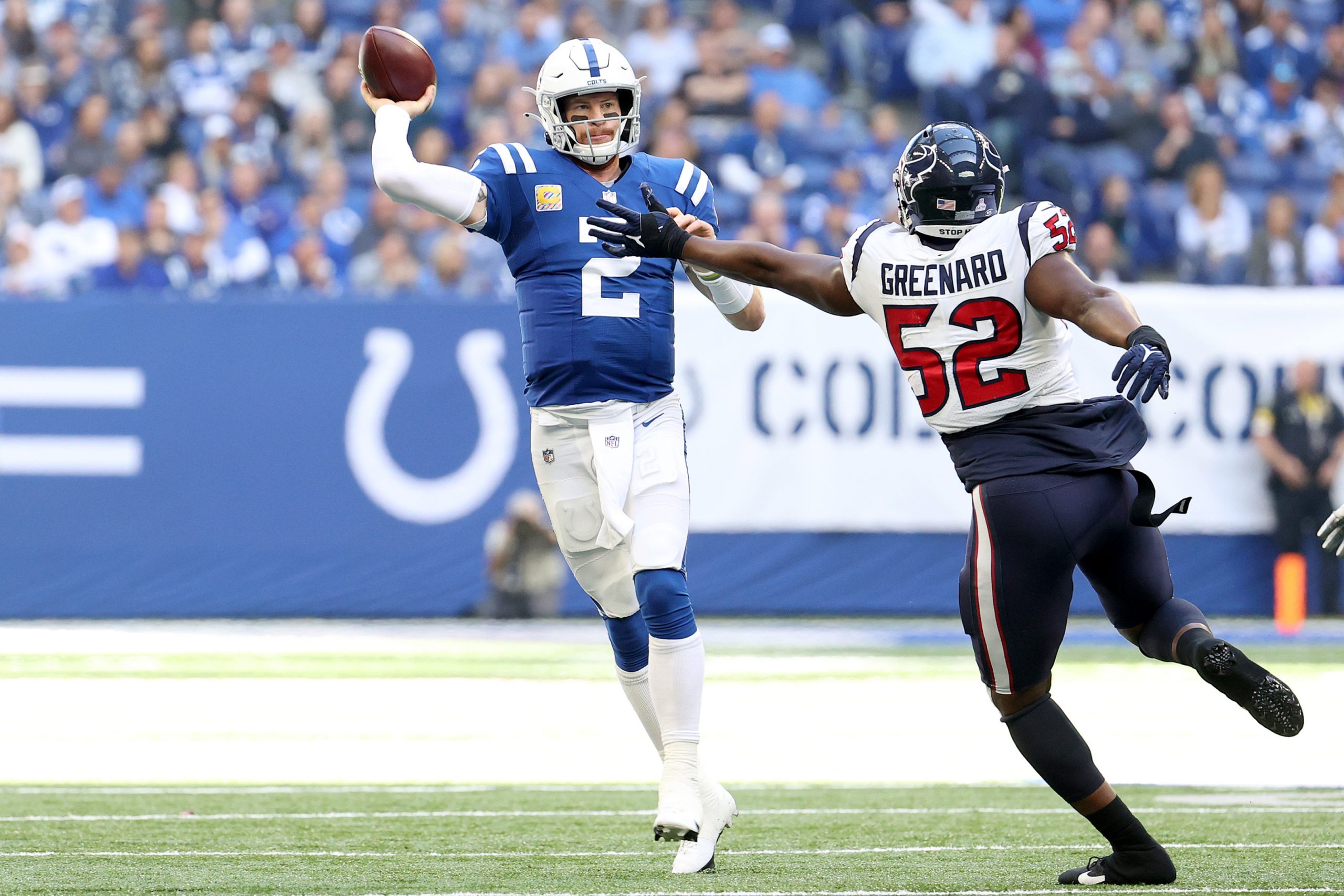 Carson Wentz evades a defender while throwing a pass in a win against the Houston Texans on October 17. Photo courtesy of horseshoeheroes.com.

The NFL felt a little bit off last week. While there were still the usual intense overtime games, most of the games were pretty lopsided. On Sunday, there were only four out of 12 games that finished with a score differential of less than double-digits.

Nonetheless, the fans will have to look ahead to the next week as the bye weeks only get worse. This week, six teams will get a breather including some of the high-scoring offenses like the Los Angeles Chargers and Buffalo Bills.

Fantasy managers must keep their heads on a swivel as they head into another glorious week of the NFL. Here are the key players to start and sit for Week 7 of the NFL season.

Carson Wentz, Indianapolis Colts. Last season, Wentz had the one worst year statistically as a quarterback in Philadelphia Eagles history. He was the leader in categories like interceptions to most sacks allowed. However, this season, Wentz is a whole new player. On his last 193 throws, Wentz has a 0.5% interception rate, which is the best in the league. Even though he will face a tougher matchup against a 49ers defense that has allowed the fifth least total yards per game in the league, his gameplay and the recent addition of T.Y. Hilton, should cause San Francisco some trouble. It is time for fantasy managers to hop on the Wentz bandwagon.

Taylor Heinicke, Washington Football Team. For an undrafted free agent out of Old Dominion, Heinicke has exceeded all expectations. After giving the eventual Super Bowl champion Tampa Buccaneers a run for their money, Heinicke has earned his job as the Washington Football Team quarterback. However, he has seen a recent dip in production as Washington continues to struggle to pull away with wins. This week, Heinicke will have to travel to the legendary Lambeau Field for the first time where he will take on the Green Bay Packers defense that has allowed the fourth least passing yards. While Heinicke’s story is very impressive, the matchup should scare any fantasy managers away from moving him into the starting lineup.

James Conner, Arizona Cardinals. Another week, another win. The Cardinals are still the only undefeated team in the NFL. Last week, Arizona came out with a statement win against the Cleveland Browns on the road where they blew them out by 23 points. Their offense has been very potent in both the pass and the run as they currently rank ninth in passing yards and sixth in most rushing yards in the league. Conner has made an impact since joining the team, leading to him receiving the bulk of the carries over fellow running back Chase Edmonds. This week, the Cardinals will face the Houston Texans defense that has allowed the second most rushing yards in the league With Edmonds battling a shoulder injury and a cupcake matchup, Conner should see his role in the offense grow against a beaten-down Texans defense.

Damien Williams, Chicago Bears. Aaron Rodgers is the proud owner of the Chicago Bears. Leaving the banter aside, the Bears played a great game on the ground against the Green Bay Packers. Sixth-round pick Khalil Herbert had no issues running the ball as he went for 97 yards and a touchdown. For a team that ranks dead last in yards per game, this was a sign of progress. Despite Herbert’s success, Williams should return from the COVID list and assume the larger role of the carries in the backfield. Regardless of the increase in touches, Williams will face a stacked Tampa Bay Buccaneers front seven that has allowed the least rushing yards per game in the league. When there are fears of historic games not going in the right direction, the red flags should be obvious enough not to start Williams.

Marquez Callaway, New Orleans Saints. Callaway, the top waiver wire sleeper before most fantasy football drafts began this season, is finally showing signs of his potential. After he erupted for two touchdowns and 104 yards in his second preseason game, Callaway looked like the number one option in the Saints receiving core. Since then, he has yet to surpass 100 receiving yards once on the season. There is still hope though after his big game last week where he matched his preseason game with two touchdowns and 84 receiving yards. The Saints next matchup is against the Seattle Seahawks defense that has allowed the fifth most receiving yards in the league. If there was any time for Callaway to finally blossom into a star on the Saints offense, this Monday night game would be it.

Hunter Renfrow, Las Vegas Raiders. Mr. Consistent in all his glory. No matter the week, Renfrow has found a way to put reliable numbers each week. In every game except last week, Renfrow caught five or more passes for an average of 56.3 yards a game. While these numbers aren’t league winners, they are also not horrific. Although, this week, Renfrow will have a tougher time reaching his average against a Philadelphia Eagles defense that has allowed the fifth least receiving yards in the league. All around Renfrow is pretty solid, but fantasy managers should just leave him on the bench for this week’s tougher matchup.

Kyle Pitts, Atlanta Falcons. The hype around Pitts is finally coming true. Since being drafted by the Falcons fourth-overall, the rookie out of Florida has slowly gotten better each week. In his last game in London against the New York Jets, Pitts surpassed 100 receiving yards and scored a touchdown for the first time in his career. The Falcons have shown more trust in him week by week, and won’t stop anytime soon especially in this week’s matchup against the Miami Dolphins defense that has allowed the fourth most receiving yards in the league. Fresh off a bye week, Pitts should be ready to continue to thrive in an offense that loves their tall receivers.

C.J. Uzomah, Cincinnati Bengals. The Bengals also got a bye of their own except they actually had to play. Last week, the Bengals faced a dying Detroit Lions team that was still in search of their first win. Cincinnati dominated on all sides of the field as they scored 34 points while holding the Lions to just 11 points. Uzomah joined in on the fun catching one of the many touchdown passes thrown by Joe Burrow. However, this week will be night and day for the Bengals as they will face a Baltimore Ravens defense that just stymied the red-hot Los Angeles Chargers offense. There are plenty of other tight ends worth taking a risk on than Uzomah.

Nick Folk, New England Patriots. The Patriots have reached panic mode. Bill Belichick’s conservatism on offense has not been getting it done as they rank ninth in least amount of points scored per game. Even though they scored a season-high 29 points last week, they still found a way to lose against the Dallas Cowboys in overtime. New England is in the same position they were last year, as they are continuing to inch closer to questioning if Belichick still has it in him. Despite the Patriots spiraling downward, they should have a better chance to get back on track this week against the New York Jets that rank in the bottom half of the league in points allowed per game. Folk is a great option worth investing in for players with a kicker on a bye.

Austin Seibert, Detroit Lions. With the Jacksonville Jaguars getting their first win of the season, that leaves the Lions alone as the only team left without a win. Dan Campbell’s tears still couldn’t motivate the Lions enough to come away with a victory. Last week, their defense was exposed by the Bengals while the offense couldn’t move the ball to save their life. Unfortunately, the Lions’ chances of winning this week will only get slimmer as they travel to Inglewood to take on the Los Angeles Rams defense that has allowed the ninth least points in the league. If anyone is foolish enough to have Seibert rostered on their team, it would be a wise idea to drop him immediately.

Carolina Panthers Defense. For a team that looked so promising, it is sad to see them fall so fast. The Panthers went from 3-0 and looked like this year’s dark horse playoff candidate to just an average team in a span of six weeks. Carolina is still searching for their identity without Christian McCaffery, who is still out with a hamstring injury. Last week, their struggles were put on full display as they choked away a game in overtime to the Minnesota Vikings. However, the Panthers still have a chance to redeem themselves this week against a New York Giants offense without Saquon Barkley that ranks sixth in least amount of points scored in the league. The Panthers defense is a blatant start against the Giants offense that is ready to fall apart.

Tennessee Titans Defense. Talk about a surprise. After the Buffalo Bills defense looked downright unstoppable, the Titans shocked the world and upset them. Tennessee’s defense did just enough to hold off Josh Allen including a game-winning stop on fourth down to seal the game for the Titans. Congratulations to the Titans for a big win, but it is time to move on to next week where they will face the Kansas City Chiefs who rank fifth in most points scored in the league. Lightning doesn’t strike twice, so fantasy managers should steer clear of the Titans defense this week.