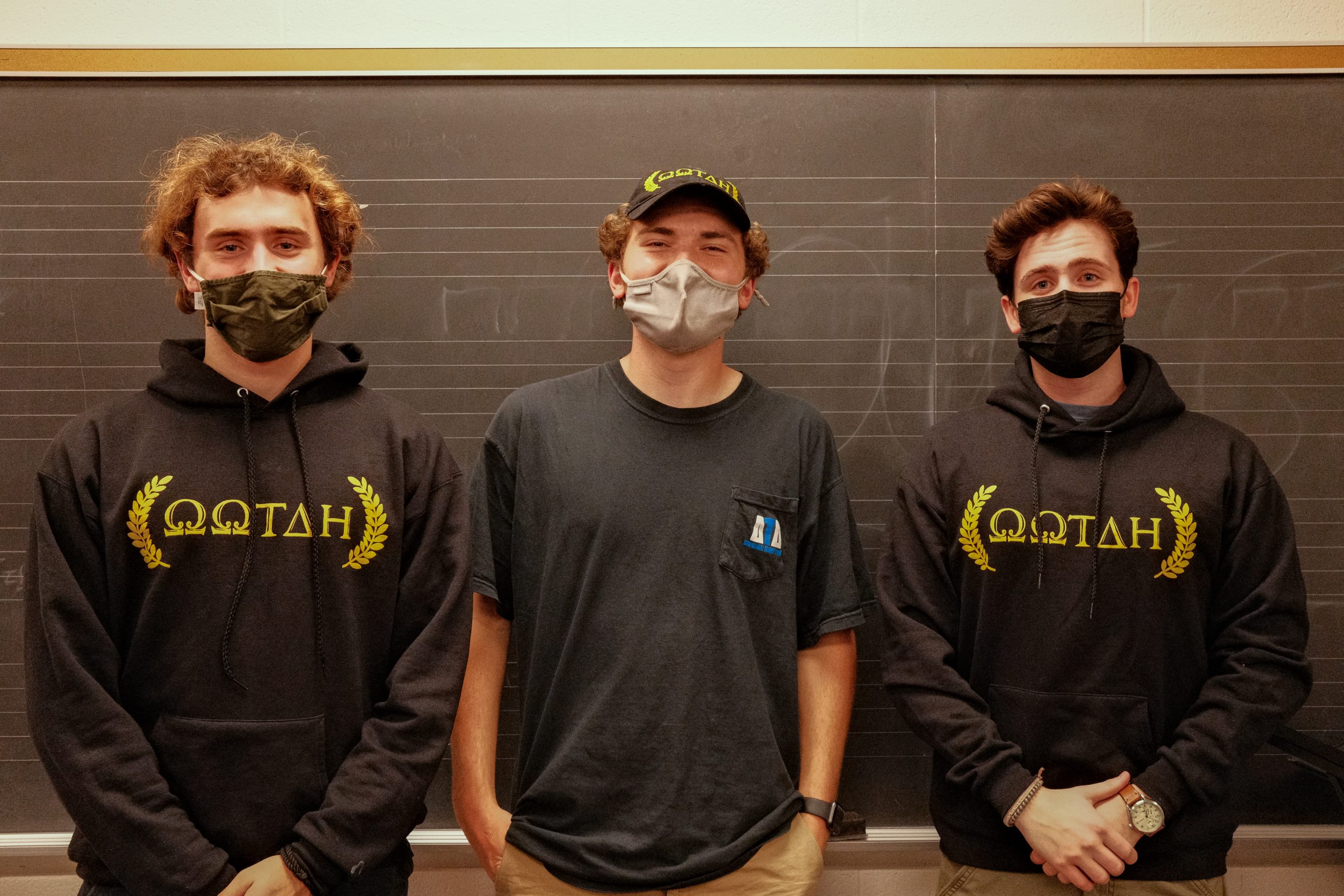 Sam Reichenbach, soph., Calvin Prenkert, junior and Luke Meyer, soph. are members of Out of the Dawg House, Butler University’s men’s a cappella group. The a cappella group struggled to rehearse last year due to COVID-19 group size restrictions. Photo by Julian Cirnigliaro.

During the pandemic, many performing arts groups on campus struggled to find rehearsal space, but a capella stayed resilient. Calvin Prenkert, junior critical communication and media studies major and president of OOTDH, describes the struggles that OOTDH faced last year.

“First semester, we weren’t able to practice in any of the spaces in Lily Hall… because they couldn’t accommodate a group of our size, so once a week we practiced in the parking garage,” Prenkert said. “We did get an opportunity to learn about three or four songs and get some of the new members acclimated.”

Unfortunately, Freshly Brewed was not as lucky, according to their president, senior health sciences major Amelia Wright.

“First semester, we weren’t able to have Freshly Brewed at all,” Wright said.

The spring 2020 semester infused more life into Butler a cappella. Both OOTDH and Freshly Brewed were able to return to masked, in-person rehearsal, expand their membership base and even find ways to perform. For OOTDH, this came in the form of their annual sorority serenades, as well as a video concert for Butler University Dance Marathon. For Freshly Brewed, performance came in the form of a livestream concert in the spring.

Although the past year brought a lot of hardship, Butler a cappella is back, and both groups remain optimistic about the upcoming year. Both of the groups are gaining membership as the school year starts. Wright said Freshly Brewed wants to have around 14 to 16 members for the year while Prenkert said OOTDH welcomed three new members, bringing their roster to 14.

But these large rosters would mean nothing without the soul of a cappella: live performance. With new and improved setlists and the prospect of in person concerts, both a cappella groups could not be more excited to share their talents with the Butler community.

“I miss [live performance] so much,” Wright said. “It means so much to have everyone be together again because there are girls in the group, especially the new members, who don’t know each other well.”

This sentiment is echoed by the members of OOTDH, especially sophomore members who have never performed with the group before at a live concert. Henry Hartley, a sophomore music composition major and second-year member of OOTDH, shared his thoughts about what it means to return to live performance.

“It feels really good to have a fresh start, as last year it almost felt as if the group was forced underground,” Hartley said. “But this year I get to experience what Dawg House is supposed to be like, as well as the traditions of the group.”

For the first semester, both groups have a winter concert planned towards the end of the semester. Butler students can also reach out to @ootdh and @fbacapella on Instagram and request private shows for various events throughout the year. But the music does not stop at formal concerts: OOTDH plans to continue their traditions of serenades, off-campus gigs and Starbucks pop-up shows.

OOTDH also has an additional project planned for this year: the recording of their next album. This album will feature a variety of new music from the group, and although the release date isn’t set yet, the members are thrilled for this opportunity.

“We record an album every two years, and we had to delay the last because of COVID but this year we hope to start recording our next one,” Prenkert said.

Both OOTDH and Freshly Brewed have completely revamped their setlists for the year. Freshly Brewed are planning on performing everything from classics such as “Still Into You,”to exciting modern projects such as a Taylor Swift medley.

The setlist for OOTDH includes everything from recent hits such as “Leave the Door Open” by Bruno Mars and Anderson .Paak, to timeless hits from artists such as Michael Jackson. Both groups also plan to collaborate with each other this year, combining their voices into something new for Butler students.

With campus life finally returning to normal, Butler students can expect the return of these a cappella groups performing around campus. Whether it is at a formal concert or a surprise show at Starbucks, both OOTDH and Freshly Brewed remain committed to bringing their music back on campus with style.